Jason Hamstra came into Saturday’s ADRL Gateway Drags at World Wide Technology Raceway as the American Drag Racing League’s Pro Extreme Top Qualifier, thanks to a blistering lap Friday night of 3.633 seconds. After a first-round win, he faced off against No. 9-seed Bill Doucet in E2 in front of a guideline-savvy crowd of socially-distancing race fans.

Doucet took Hamstra off the board with a massive holeshot, putting the PX favorite on the trailer early, leading the way for Hank Stubbs to tee off for the Minuteman trophy win, his first of the season. Stubbs beat class champion Mike Recchia in a final for the ages, Stubbs’ 3.667-second lap at 206.29 mph just beating Recchia’s 3.676-second pass at 207.18 mph. It’s a victory that gave the fans at WWT Raceway a taste of what they can expect at ADRL Dragstock XII here Oct. 23-24. 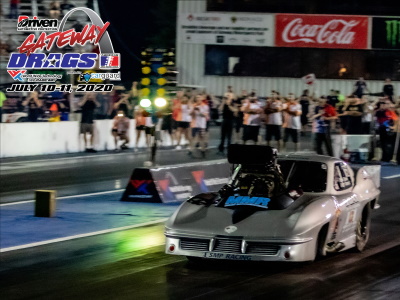 There was more drama earlier in the day when Dragpalooza Top Qualifier and this weekend’s No. 3 provisional qualifier in PX Wesley Jones had to back out of the event due to terminal damage to his car from Friday night.

The night continued to see more of ADRL’s incredible side-by-side racing under the lights as Frankie “The Madman” Taylor continued his unique streak of round wins sans an opponent. In his victory last month at the Texas Motorplex, Taylor won all four rounds without a single opponent staging next to him. The same happened in round 1 here Saturday night. He finally faced an opponent in E2, defeating Bubba Stanton with a thundering 3.63-second shot. Taylor would finally fail to turn on the win light in the semis when Stubbs got around him.

Two of the closest races of the weekend occurred in the Jr. Dragster finals. In Top Jr. Dragster, Cohen Hale was able to tree Tyler Wells for a 8.935 to 8.915 holeshot win, while in Pro Jr. Dragster, Kenzie Whitley edged Adam Jakupcak at the stripe for a .009-second margin of victory and an ET of 7.930 seconds.

Other ADRL winners Saturday night at WWT Raceway were:

The ADRL returns to World Wide Technology Raceway Oct. 23-24 for Dragstock XII and the next race on the schedule is Oct. 2-3 at the Texas Motorplex near Dallas. SpeedVideo will once again carry both events LIVE.

Didn’t get a chance to get that 2020 Gateway Drags shirt? Couldn’t make it to the race this weekend, but still want the event merch? Head to the ADRL Store at ADRLDrags.com/Store.