INDIANAPOLIS, IN (July 12, 2020) – Terry McMillen and the AMALIEⓇ Motor Oil Top Fuel team had momentum on their side after a day of testing on Friday and a solid day of qualifying yesterday at the E3 Spark Plugs NHRA Nationals in Indianapolis. Coming back to the track that a few years ago was the site of his biggest win, the U.S. Nationals over Labor Day weekend, in 2018 the Elkhart, Indiana racer was full of positive energy. He had a brand new race car and the AMALIEⓇ Motor Oil XTERMIGATORⓇ Top Fuel dragster was ready to battle with a tough Top Fuel field.

In the opening session of qualifying McMillen and his Ron Wendland tuned Top Fueler made the quickest pass of the day and grabbed three valuable bonus points and went in to the final qualifying session as the provisional No. 1 qualifier. In the second round a couple dragster ran quicker but McMillen stepped up and jumped to the No. 3 qualifier position and a strong feeling going into race day. The track conditions during testing and qualifying were hot and as the second session came to an end a huge thunderstorm rolling over the race track ending the day for the racers and setting up a race day with completely different race conditions.

The NHRA made a number of adjustments to their racing schedule to maximize a safe racing environment for the teams and fans which included an early race start at 9 a.m. local time. McMillen’s first round opponent was not your traditional No. 14 qualifier. He would be facing three-time Top Fuel champion Antron Brown who struggled in his only two qualifying runs.

The pair pulled up to stage and as the tree lit up both dragsters leapt off the starting line with Brown grabbing a slight edge. As both 11.000 horsepower dragsters accelerated McMillen pulled even and looked to be pulling away before he hazed his Goodyear tires. That loss of momentum opened the door for Brown to go around McMillen. The Amalie Motor Oil dragster did not give up as McMillen got off the gas and then mashed the throttle pedal back down firing his race car back into motion but he was too far behind Brown as the finish line approached. McMillen tripped the lights with a 6.659 second run at 89.70 mph, a far cry from his best qualifying effort of 3.812 seconds at 316.75 mph.

“We had a good day of testing and a great day of qualifying,” said McMillen at the end of the day. “We were No. 1 after the first round and stepped up in the second round. I have a great team and my crew chief Rob Wendland has done an amazing job with these guys. We just didn’t capitalize on a great opportunity. We had the advantage I feel and we will not lose that heading into next week. I am already looking forward to getting back to the track and make the most of this opportunity to race the Amalie Motor Oil Top Fuel dragster.” 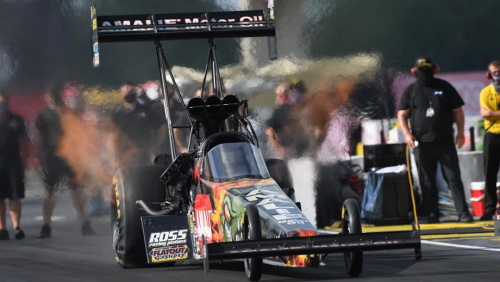 Photos courtesy of NHRA/National Dragster for media use only.