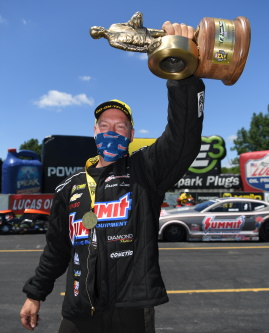 Brownsburg, Ind. (July 12, 2020) – Jason Line christened the 2020 season of NHRA’s Mello Yello Drag Racing Series as his final in the seat of a Pro Stock car. He’s had a tremendous career, one that has included a plethora of accolades that include three world championships in what is arguably the most competitive category in drag racing, but his heart is in the engine room and running the dyno at KB Racing. Once the decision was made, the lifelong drag racer who hails from Minnesota began a mental checklist of things left to accomplish. One of the most important items on the list was winning at least one trophy in his final season, and he did that on Sunday at the highly anticipated E3 Spark Plugs NHRA Nationals at Lucas Oil Raceway at Indianapolis.

“This one is special,” said Line, who extend his ownership of the longest career season win streak of any other active driver in the series to 17 seasons. “Every one of these wins means a lot, but this being my last year, and I really wanted to keep the streak going. My dad [Lawrence Line] is big on stats. He’s been keeping track and reminds me about it every time he can – I’ve won one every year since I started racing full time in 2004. Now, no matter what happens the rest of this year, we’ve done that. I’m pretty happy.”

The Mooresville, N.C.-based driver prepped for the victory by securing his position as No. 1 qualifier at the event in his silver Summit Racing Chevrolet Camaro. En route to the 51st Pro Stock win of his career, Line utilized KB Racing horsepower to defeat Alan Prusiensky and Alex Laughlin before coming up against Summit Racing teammate Greg Anderson in the semifinals.

Anderson was a formidable opponent who entered raceday with a capable racecar that set top speed of qualifying. The 94-time national event winner and four-time champion had proven sharp at the starting line in earlier rounds with a .016-second reaction time followed by a .017, and he clocked what would be low elapsed time of the entire event in the first round with a monster 6.603. 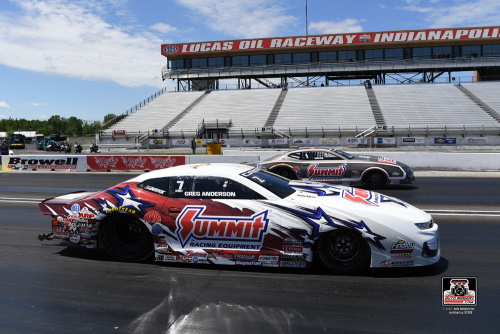 Team Summit was guaranteed a trip to the trophy-round as Line and Anderson rolled through the waterbox and laid down equally threatening side-by-side burnouts, and both were equally as intent on defeating their friendly rival. Anderson launched first and had top speed of the day, but Line crossed the stripe first for a 6.622, 207.34 to 6.683, 208.14 victory to lock into the 104th Pro Stock final of his career.

“This was definitely a different weekend,” stated Line, referring to the months-long break in action as the country dealt with sheltering in place and the COVID-19 pandemic. “We had a lot of time off, and I can tell you that Greg Anderson led the charge in making sure that we came back with good stuff. He worked his tail off these past few months, and it showed in what we were able to accomplish yesterday and today. I’m pretty excited leaving here knowing that the silver Summit Racing Chevy Camaro is even better than it was before. I’m definitely looking forward to seeing how the rest of this year goes.”

The next Pro Stock event on the schedule for NHRA’s 2020 season of the Mello Yello Drag Racing Series is the NHRA Heartland Nationals in Topeka, Aug. 21-23. The schedule is subject to change. Go to NHRA.com/schedule/2020 to view the current schedule.

Quote:
“My Summit Racing Chevrolet Camaro isn’t a new car, but it’s new for me, and I can honestly say that I have a really good car now. It worked great – we just made a mistake in the semifinal and missed the starting line. But this Chevy is fast, it was easy to drive, and really it was just a joy to drive. We’re competitive again, and I’m happy. When we go racing again, it looks like I’ll have something to say about how the remainder of this year goes.”