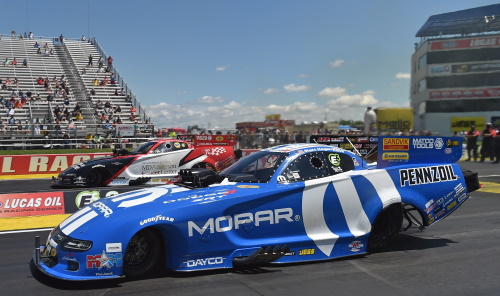 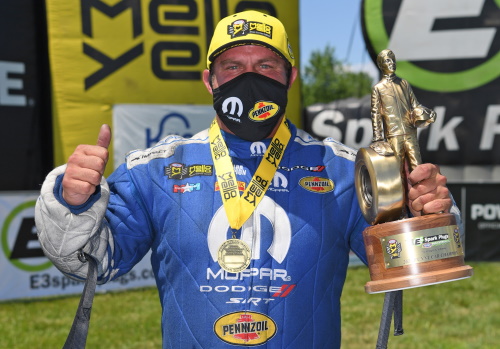 From a sixth-seeded position, Hagan drove his Mopar Dodge Charger SRT Hellcat to the winner’s circle for the first time this year, giving him his third Wally in six nationals events dating back to October 2019 when he won both the AAA Texas NHRA FallNationals in Dallas and the Dodge NHRA Nationals presented by Pennzoil in Vegas. DSR Teammate Jack Beckman’s wins in the 2019 season finale and 2020 season opening races at Pomona, Calif., along with Johnson’s win at the Arizona Nationals means that a DSR Dodge Charger SRT Hellcat has earned a national title at each of the last six events. 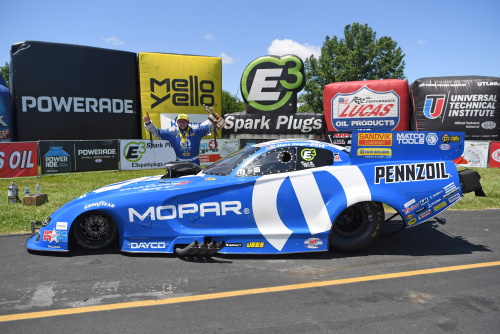 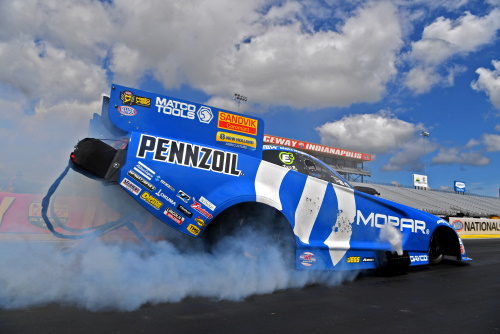 Hagan was consistent with both his reaction times and runs to quickly dispose of Daniel Wilkerson, Beckman, and Tim Wilkerson. That set up an all-Mopar final showdown against No. 1 Qualifier, Johnson Jr., who was also making his second consecutive final round appearance. Johnson made it to his 54th final round by knocking off teammate Ron Capps, Blake Alexander and J.R. Todd. The two DSR teammates had previously met twice in final elimination round match-ups, with Hagan emerging as the winner in both.

Hagan’s powerhouse had the early advantage and enough of a lead over Johnson to earn a decisive win, the 34th of his career, even when his engine let go right at the finish to set off a few of its own fireworks. On the strength of his victory and two top qualifier awards to start the season, the Hagan and his Mopar Dodge Charger SRT Hellcat move up into third place in the Funny Car championship points standings. 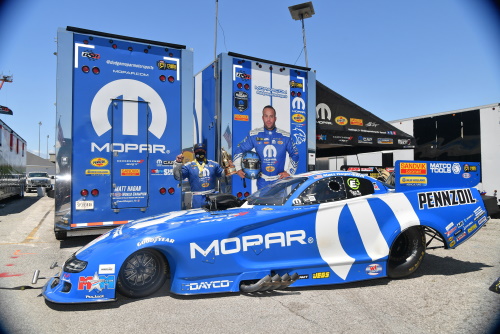 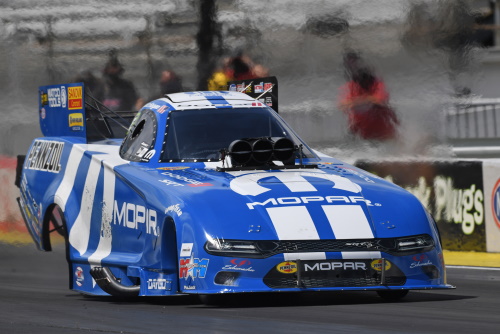 Meanwhile, following a No. 3 qualifying effort, Beckman was able to keep his lead in the Funny Car points standings by driving his Infinite Hero Foundation Dodge Charger SRT Hellcat away from Mike McIntire in the first round straight into a quarterfinal showdown with DSR teammate Hagan. While the loss to the eventual winner was disappointing, Beckman is two markers ahead of runner-up Johnson Jr. and 40 points from Hagan, with each driver boasting a win this season.

For his part, Ron Capps had a tough restart to the season, qualifying 16th to face teammate Johnson Jr., who was still riding the momentum from his win at the last-contested NHRA event in February and a No.1 qualifying position earned on Saturday. Capps laid down a solid 3.956 E.T., the second-quickest run of the entire first session except that it was against the only car to run better, as Johnson posted a 3.896 to move on. While they didn’t walk away with the round win, Capps and the NAPA team are bolstered by the fact that they have their car back and know they’re capable of running big numbers.

In Top Fuel competition, a tenth place qualifying position on the eliminations ladder saw Leah Pruett’s opening round pairing pitting her against seventh-seeded DSR teammate Tony Schumacher, the winningest Top Fuel driver in NHRA history, making a cameo appearance for the back-to-back Indianapolis race events. Pruett had the starting line advantage and never looked back to move on to a quarterfinal match-up and lane choice over current points leader Doug Kalitta.

Once again, the Mopar Top Fuel Dragster was quick on the on the tree and held the lead on Kalitta through to half-track, but a close side-by-side race to the finish with just a 0.01 second difference saw Pruett edged by her opponent at the stripe to end her day a little sooner than she had hoped.

Qualified 12th for the first of his two-event ‘comeback tour’ with DSR, Cory McClenathan didn’t even get a chance to challenge for a winlight when an issue kept his car in neutral and from staging the car for the start, but he’ll look another shot to battle for a 35th career Top Fuel win next weekend.

Mopar Dodge//SRT and DSR will return to Lucas Oil Raceway in just a few days for the Lucas Oil NHRA Summernationals, the second of two consecutive Indianapolis-based on July 18-19, as part of the updated 2020 NHRA schedule.

“That was the first time we made it to the lights under power in six runs this weekend. We have been having an issue with down track tire spin and we obviously remedied that. The crazy thing is we ran second low ET of the meet by backing the car down and that tells us what we need to do for next weekend. It’s upsetting to lose, but with a new front half on this car the silver lining is we have a good baseline tune-up for next weekend and I think we’re going to be a favorite when we roll back up for Q1.”

“It was a big change going from super cool conditions, and being able to run really hard, and then watching (crew chief) Dickie Venables make the adjustments when it’s a 140-degree race track, and different things like that. Really proud of Dickie, (assistant crew chief) Mike Knudsen, Alex Conway, and all my guys that are wrenching on the car to make these adjustments.

“My guys put a great race car underneath me. We kept lane choice all day long and to be able to make those calls, and to go out there and run hard in this heat, is really telling. Tommy Johnson, he really had the car to beat this weekend. He rolled out of the box really strong. That whole team over there, they’re going to be tough for us all year long. I’m just really proud and excited to be a part of NHRA that’s bringing it out here with the fans. We’re back out here, and we’ve got this race underneath us to show people that we can do this, and do it right. People are taking the necessary precautions and making sure we’re staying safe. It’s just really nice to be back into drag racing and to be able to hold up the Wally again.”

“I’m kind of disappointed, but it’s hard to be disappointed when you go to the final round and get a No. 1 qualifier. We have a great car just like we did at Phoenix. Out of nowhere it put a cylinder out and (crew chief) John (Collins) did the right thing by trying to shut me off and just after he did that I watched Matt (Hagan) blow up and I think I could have been him on seven. It’s probably the right decision to not risk hurting parts. It’s still a great weekend and we have such a solid race car and with a shortened season and no Countdown being near the top of the points is the most important thing.”

“We didn’t qualify where we wanted to, but I always brag about our NAPA team that we can win from any starting position. My friend and former teammate Larry Dixon texted me yesterday and said you have a much better chance winning from the 16th position than the 17th. We just went up there and did what we do. Tobler did a great job reading the race track without lane choice. I don’t think that mattered. We had to go up and race John Collins, who we know well, and Tommy Johnson is as good as it gets in the driver’s seat. At that point we were second quickest of the round and I shut it off a little early because Tommy (Johnson Jr.) was ahead of me. I’m very happy with how the weekend finished after that run, unfortunately we just put ourselves in a bad position with qualifying and we just can’t do that. That’s not our MO. I’m very excited about next weekend.”

“It was an early start, but we were more than ready. Racing Tony (Schumacher) isn’t ideal. Tony had traction issues and we had the (blower) belt release which is one of the worst feelings as a driver. You’re ahead, you’re going, you’re making power and all of a sudden you’re coasting and I hear Tony pedal and you’re thinking ‘oh my god, just make it.’ It felt great to get the win light and we brought everything we had against Doug Kalitta in a heavy-hitter matchup and it was one of the closest races we’ve had in a long time. What that shows is that this Mopar/Pennzoil team hasn’t skipped a beat. We’re as strong as we’ve ever been and we’ll keep progressing and come back here next weekend with a solid foundation for both cars with Cory (McClenathan) and me and go after that Wally.