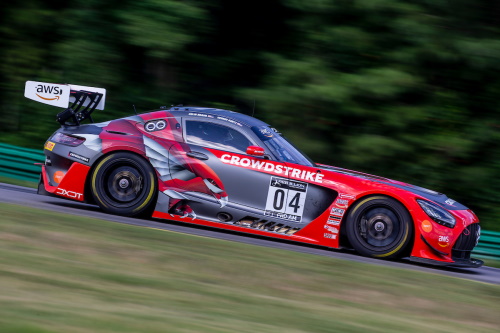 George Kurtz and Colin Braun claimed a win in Sunday’s 90-minute, two-driver endurance race at Virginia International Raceway (VIR) – the first victory for CrowdStrike with Mercedes-AMG in SRO America’s highest category of racing. Not only did they claim victory in the Pro/Am class, they were the overall winners as well against top-level competition.

The result capped a fantastic return to racing for CrowdStrike – a competitor in three SRO America categories and the Official Internet & Cloud Security Provider for GT World Challenge.

Virginia International Raceway was the site of the program’s first motorsports event in more than four months. The SRO weekend took place with CrowdStrike Racing and all series participants supporting and adhering to strict local, state and federal guidelines on medical screening, social distancing and use of personal protective equipment (PPE). 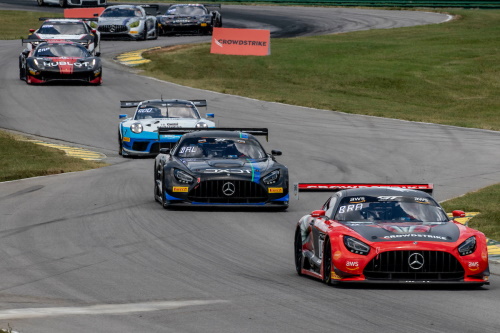 Kurtz and Braun celebrated their landmark first victory together after a tough and tense battle Sunday. After Braun started the No. 04 from first in class, Kurtz roared across the finish line holding on to his 0.226s lead ahead of the second place car after a late-race, full-course caution bunched up the field for the final 12 minutes of the race.

“First off, I have to thank DXDT Racing and Mercedes-AMG for such a great CrowdStrike/AWS Mercedes-AMG GT3,” said Kurtz, a veteran champion of SRO competition. “Colin did a fantastic job, and that combined with the great pit stop from DXDT Racing gave me a big lead that I was able to extend. I saw one of the Porsches stopped on the back straight and knew we were going to have a restart and the fight was going to be on. With a couple minutes left, I had to buckle down and focus on pulling a gap over second place and got it done. It’s a special win today with Colin.”

Braun began from first in the Pro-Am class and a second overall position after a strong Saturday qualifying effort and held the lead for the first 50 minutes. He pulled into the pitlane for the race’s mandatory stop for fuel, new Pirelli tires and a driver change to Kurtz.

Embracing the mantra of making every second count, the DXDT Racing crew got Kurtz out of the pitlane with the quickest stop of the race and less than a second above the minimum allowed pit stop time.

The crew’s quick pitwork allowed Kurtz to build a lead of more than 11 seconds before a full-course caution with a full 15 minutes left to race. Suddenly, Kurtz’s hard-earned lead disappeared as the rest of the field lined up behind him for the restart. The pressure of leading by such a small margin didn’t faze Kurtz, who put together quick lap after quick lap to take the checkered flag for the whole team. 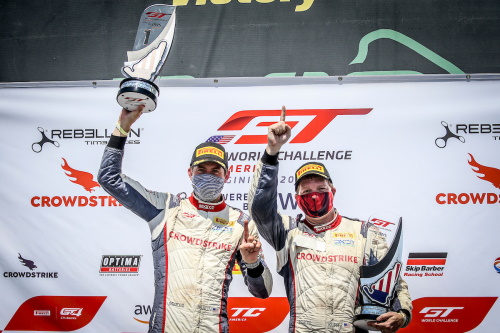 “This is super special for CrowdStrike and DXDT Racing,” Braun said. “Seeing how the race unfolded, we obviously had a good gap before the yellow came out. It fell back on George’s shoulders to really push hard there at the end. To see him finish off that race like he did… he didn’t just get in and have a big gap to the finish. He had to earn it. “Every Second Counts, like CrowdStrike says. It’s really cool to see him drive at that level. Seeing him execute like that was super special. Our CrowdStrike/AWS Mercedes-AMG was hooked up all weekend and was fast in all our practices. This was a real team effort and a special day.”

Kurtz and Braun suffered a double bout of misfortune in the opening 90-minute race Saturday. After running in podium position from sixth earlier in the day, the No. 04 CrowdStrike Mercedes-AMG just missed claiming a trophy. The day began tough for Kurtz, who went off-track to avoid a spinning car while trying to set his best qualifying time.

Another issue in the race set the Mercedes-AMG back in the order, as did an extra pit stop shortly after the mandatory driver change. Despite being a lap down, Braun posted the two best times in the race to show the pace of the CrowdStrike Mercedes-AMG. 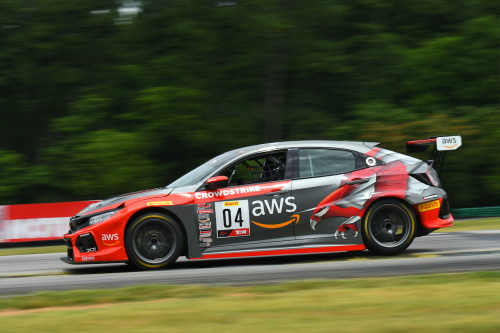 In Touring Car America competition, CJ Moses (TCR) and Kevin Boehm (TCA) returned to the track in Honda Performance Development Civic entries at VIR. Both were looking to pick up where they left off following solid starts to the season in March at Circuit of The Americas.

The two drivers showed impressive pace in practice and qualifying at VIR. Moses qualified fourth in TCR for the first race with the No. 04 CrowdStrike/AWS/DXDT Racing HPD Civic Type R TCR. Boehm, meanwhile, started third in his No. 9 CrowdStrike/AWS HPD Civic Si for the TCA category.

“It was great to be back racing, especially at my favorite track, VIR,” Moses said. “Three races on a weekend is a big challenge in the heat and conditions we all faced. Thanks to everyone at CrowdStrike, AWS and DXDT Racing for a competitive HPD Civic Type R TCR. These were some of the fastest laps I’ve ever turned at VIR. It was great fun.” 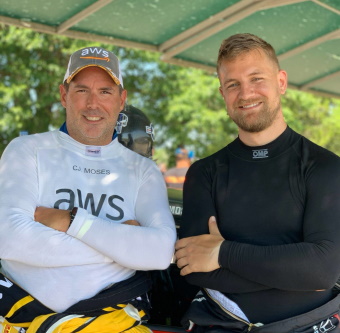 The speed of both CrowdStrike Civics remained evident in the early going before both Moses and Boehm experienced mechanical issues that impacted their finishing positions. Moses encountered an engine intercooler issue and electrical gremlins while an engine cooling issue delayed Boehm.

Those problems affected Friday’s race and as a result, the starting positions for each driver in Saturday’s round. Boehm fell back to sixth in TCA at the start but rebounded to finish fourth while Moses was seventh as the race ended under full-course caution as issues continued to impact the performance of both drivers.

Not to be deterred, both drivers came out Sunday with what appeared to be CrowdStrike Civics at full strength. It showed as both Moses and Boehm were able to race and dice with their competitors and were turning their fastest laps of the weekend… until another full-course caution came out with 14 minutes left.

Boehm finished just off of the podium with a third straight fourth-place finish while Moses placed sixth. 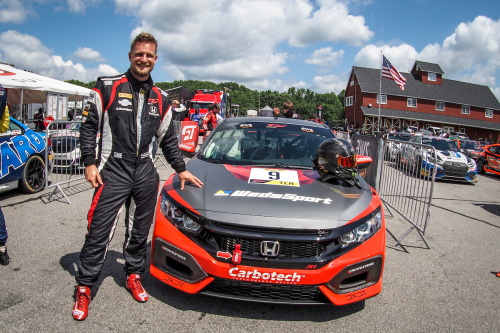 “We were all looking for great results in our first race back in TC America,” Boehm said. “Our CrowdStrike/AWS HPD Civic felt pretty solid early on. Unfortunately, we had a hard time keeping the car cool throughout a really tough and sweltering weekend. While that was disappointing, I’m really happy to be back on the track representing CrowdStrike and AWS. This first-year TCA program has a lot of potential and the support has been great. I’m looking forward to getting back to the track again at Sonoma for CrowdStrike’s home race and putting on a great show for all our supporters. I want to give a special thank you to Chad from Operation Motorsport – it was great to have him as part of our team.”

CrowdStrike, AWS and Boehm Racing were proud to continue their support of the Operation Motorsport Program at VIR with Army Staff Sgt. Chad Failing being embedded with the team and assisting the No. 9 CrowdStrike/AWS HPD Civic Si, just as he was at Circuit of The Americas in March.

Staff Sgt. Failing served more than 10 years on active duty and served two combat tours. Among his deployments were in Kuwait, Iraq, Afghanistan and South Korea. At VIR, Staff Sgt. Failing helped Kevin Boehm and his HPD as mechanic and team assistant. His help proved valuable on one of the hottest and longest weekends SRO competitors will face this year.

Operation Motorsport is a veteran-led and -operated, 501(c)3 Not for Profit, based in Brighton, Ontario, and Raleigh, North Carolina that serves Canadian and American service members and veterans. The program was founded on the basis of three simple words: Excite, Engage and Empower. The premise is to engage ill and injured Service Members and veterans affected by military service, through motorsport activities to aid in their recovery and rehabilitation. Chad’s participation with Boehm Racing was a valuable experience for all.

The next event for SRO America and CrowdStrike Racing is next month’s home race at Sonoma Raceway. And what a weekend it promises to be!

Sponsored by CrowdStrike, the SRO America weekend in Northern California will take on a different look for CrowdStrike and its guests. Plans are underway for virtual in-race entertainment and interactive events that will allow for greater participation from those away from the track.

The goal is still the same: showcase to competitors and guests alike the wide array of methods that CrowdStrike protects and promotes its involvement in SRO. To start, CrowdStrike is on the front lines of cyber protection with its Falcon platform to secure all data generated and stored by SRO.

Additionally, CrowdStrike VIPs and guests will continue to enjoy new and exciting ways of interacting with each other and the racing program once at Sonoma Raceway. That includes presentations by CrowdStrike leadership and industry thought leaders and Q&A with CrowdStrike Racing team members and drivers.

As the racing season is effectively re-launched, so too is CrowdStrike Racing’s online brand presence. The new website, crowdstrikeracing.com, offers fans, staff, and partners a richly immersive experience with new videos, dedicated event pages, and links to stream live SRO races right from the website. More photos, press releases, and features will be added throughout the race season.