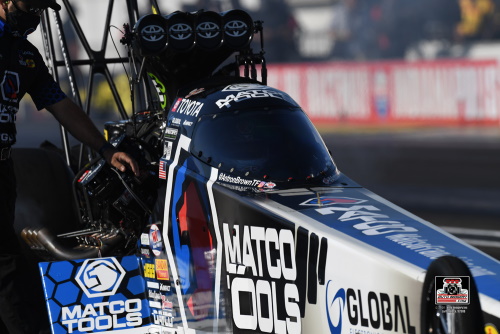 Quotable:
“I’m looking forward to the Indy Summernationals. Week one started off a little rocky but we came back really strong on race day. After second round, we definitely had a car that could bring that Wally home and that’s what we had our sights on. So, this weekend going in with our Matco Tools/Global Electronic Technology/Toyota Top Fuel dragster, we’re definitely looking forward to getting after it. We know it’s going to be hot, it’s going to be nasty but I know my team has something in store for those types of conditions. We’re going to take it one round at a time. Our main focus is to qualify in the top of the field and that’ll set us up to go after it on race day; that’s the game plan. We’ve got two runs to get in the show, and we’re going to make the best of them.

“With my teammate Tony Schumacher in the Global car, and with both of our cars going back and forth, I think we’re going to have some really good data to go off of. I can’t wait to get back out there, and I think it’s going to be a good weekend for our group as a whole and I can’t wait to do it.” 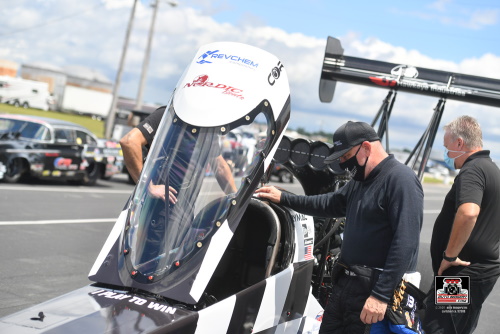 Quotable:
“I know we had a rough weekend with the Nordic Boats/Revchem Composites Top Fueler last week, but we’ll definitely show everyone what we’re made of this weekend. Our crew has got everything worked out and I’m looking forward to getting back out there and having a good race weekend.” 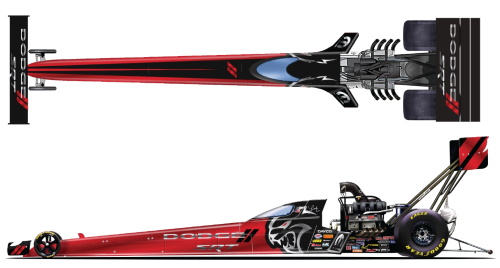 Quotable:
“I’d like to say that I’m surprised how good this Redeye paint scheme looks, but I’ve come to expect nothing but the remarkable from Dodge when it comes to showcasing their cars. They stand out on the racetrack and they stand out with their performance. It makes me feel like when you’ve got a really nice dress and your dancing shoes on, then you go and have a good night out on the town. This Redeye dragster is going to have a good weekend. I can just tell. There is an aura about it. The Redeye stands for ultimate power and it’s a way for us to be able to relate to those Redeye owners. It’s a new version for us to highlight. We had the 1320 and the Demon and I personally have driven a couple of Redeyes and I wish I had one of my own. I feel that we are going to not only look good, but do well. I’m just very impressed with how forward-thinking Dodge has been working with DSR on the paint scheme. They’ve actually simplified that paint scheme into something that really pops with the chrome detail and that flat black is simple and refined. While I love my blue Mopar for how sleek and cool, like “with a lot of o’s” cool it is, this Redeye is spicy hot.” 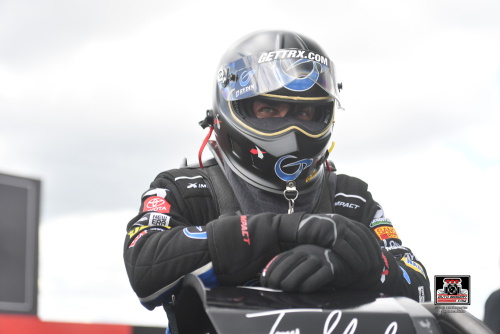 Quotable:
“I had a freaking blast last weekend. Yeah, it wasn’t the outcome we wanted but it felt great to get back in the seat, and I can’t wait to do it again this weekend. I forgot how much you can learn in a week when you have a great teammate like Antron Brown. I sat out for a year and eight months, and I still felt totally comfortable jumping back in last week because I had the right people around me. There were never any hesitations, we all just clicked so well. Even though we were one run short of everyone else due to being rained out in Q2, we still feel like we have a good baseline to work off of and I’m ready to do big things in this Global Electronic Technology Toyota this weekend.” 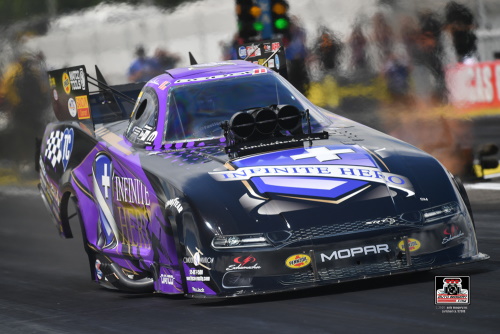 Quotable:
“After 19 weeks off, I’m so happy that we get a chance to go right back out and race again the following week. I think we had a car that clearly could’ve won the race last weekend. We qualified third, and of the eight cars that made it into the second round, we had the second-best numbers. We would’ve beaten any other car out there except the one we lined up with. It’s time to get back into the winner’s circle. I’m excited to get back out there and see the fans and do our best to social distance but still be friendly, and leave with the trophy.” 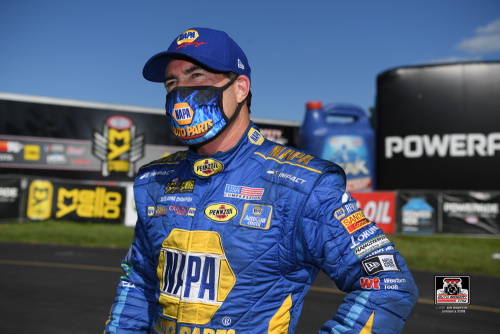 Quotable:
“I can’t tell you how good it felt to be back in my NAPA Hellcat last weekend at the Indy Nationals. Having a race close to home for the crew members is always very cool for me. All of the fans that came out the first week in Indy did a great job showing that they had paid attention to all of the safety policies. They were all wearing the masks, practicing social distancing, and everything they did really got NHRA drag racing started off in the right direction again. Our team’s performance wasn’t there like we’re used to. We didn’t qualify well and that put us in a bad position to race the No. 1 qualifier first round, and even though we were second-quickest of the round, it doesn’t matter when you’re facing a tough teammate like Tommy Johnson Jr. We’re going to focus on qualifying better this weekend and getting back to where the NAPA team is used to, and that’s finishing the weekend with a Wally.” 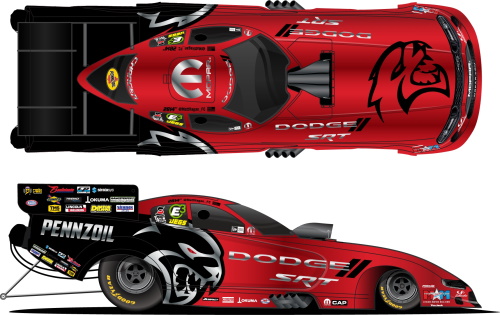 Quotable:
“My car this weekend is beautiful and those colors really pop and I think it’s going to look great at 330 mph, so don’t blink. Dodge always comes out with some awesome schemes, the coolest and fastest cars. I love that they really give me an opportunity to engage with the fans and the stuff they sell on the showroom floor. I’m excited for fans to see this Mopar Dodge Charger SRT Hellcat Redeye because I love it. It’s an amazing paint scheme. My Hellcat Redeye Funny Car might be faster, but when you have a production car that you can grab off the showroom floor and take it out there, that’s pretty awesome. It’s pure power. It’s probably the closest you can get to what we’re drag racing; having that raw power in the palms of your hands and underneath you. I can’t wait to get right back in the winner’s circle again this weekend and I’d love nothing more than to do it with this sleek-looking Redeye.” 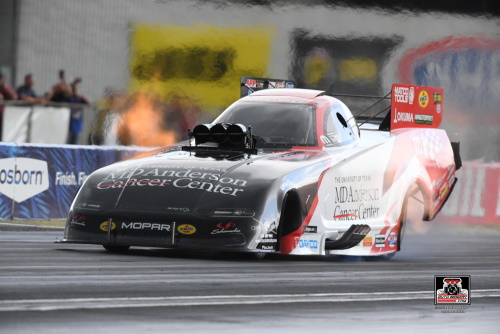 Quotable:
“I can’t wait to get back out at the track this weekend and try and get that victory. We came up just a little short on Sunday, but it was an outstanding weekend for our MD Anderson team, and to pick up right where we left off from Phoenix after a long, extended break is very encouraging. I think things will just get smoother and smoother this weekend now that we’re back in the rhythm of things. If it’s anything like last weekend, we should shine and we’d love nothing more than to erase that two-point deficit between us and Jack Beckman who’s in the lead. We want to come out as the point leader. We had a tremendous weekend last weekend, and it was nice to see the fans out there and to see everybody doing their part in trying to be safe. The fans were very considerate with staying back a few feet from the pits and making sure they were masked up. It was a great weekend overall, and I can’t wait to do it again.” 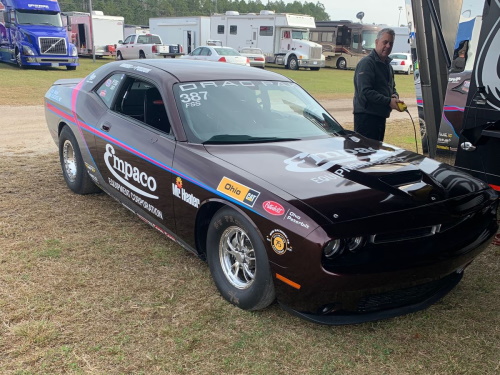 Quotable:
“After almost a four-month hiatus, I’m really looking forward to competing in the NHRA Summernationals in Indianapolis. The last time I was down the track was in early March, and then the coronavirus shut our season down. It’s great that we can get back out there this weekend, and it’s great that NHRA was able to adjust the testing protocol on Friday, so we can get our car back on the track. We’re looking forward to the Empaco Equipment Don Schumacher Racing Dodge Drag Pak being ultra-competitive this weekend, and giving us a shot to get our first Wally on Sunday. Really looking forward to seeing the fans, and even though we’re social distancing, we’ll have autographs ready and we’d love for fans to stop by the Factory Stock pits and grab a handout.” 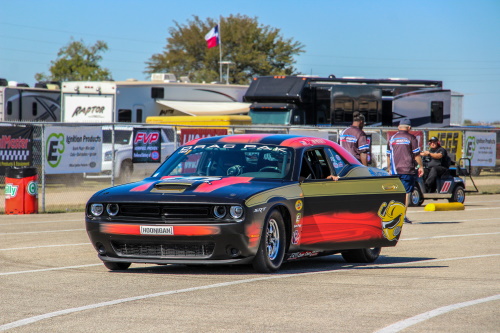 Quotable:
“Coming back to racing has brought some sense of normalcy back and getting back in the Drag Pak is one of my favorite places to be on earth. We were very much looking forward to debuting a new Mopar 2020 Dodge Challenger Drag Pak this year, but even though we’re not, we’re still going to be out entering, qualifying and competing and chasing down a Wally with Mopar and making as much power as we can, while we can, in the circumstances that we can. I think the strength really shows in how dedicated Mopar is to this sport and the grassroots racer. No matter what is happening in the world, they still care and still value the racer, the brand, the image, and the power. We will do our best to prepare for when that fourth-generation Challenger Drag Pak does come out so we can have a ton of confidence and be dominant again. I feel this 2020 season is going to be a nice cap on what is a great Drag Pak era before we start a new one.”