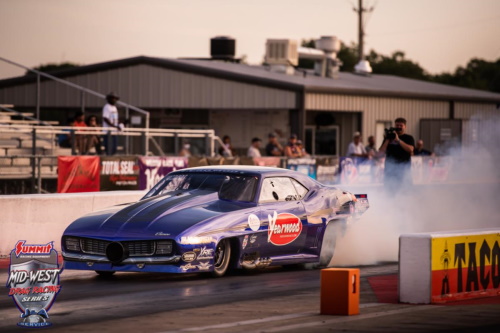 FERRIS, TX (July 18, 2020) – When it was all over, crew chief Bob Gardner unexpectedly jumped behind the wheel of Clint Satterfield’s 100-percent-NHRA-legal ’69 Camaro Pro Mod, fired up the ProCharger-equipped XRE Hemi, and motored from victory lane back to the pits at Xtreme Raceway Park in Ferris, TX. In the wee hours of July 12, the dynamic duo out of Springfield, MO, had just defeated nitrous stalwart Jim Sackuvich in the Pro Mod final for Satterfield’s career-first win in the recently rebranded Summit Racing Equipment Mid-West Drag Racing Series presented by J&A Service (MWDRS). 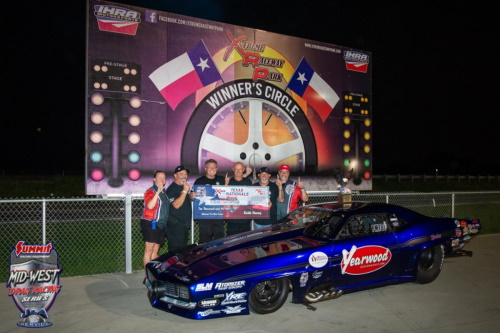 “I just said, ‘Just don’t do a burnout, that’s my job,'” Satterfield said with a laugh after solidifying his 2020 MWDRS points lead. “Bob deserves it. He works every bit as hard as I do to make this thing go and when you’re winning everything’s fun. But you know, even when we were losing and getting beat up every weekend we were still having fun. I mean, we’re exceptionally blessed. We get to play with race cars.” 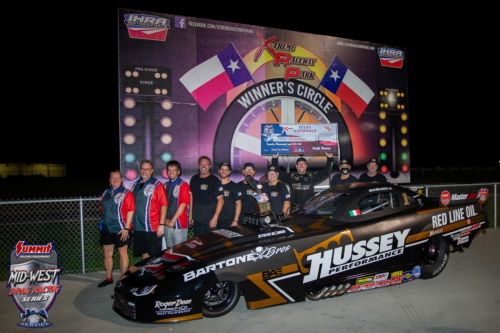 Also visiting victory lane at the tidy eighth-miler just south of Dallas was number-one qualifier Sean Bellemeur, who ran the table in the first-ever MWDRS edition of Top Alcohol Funny Car with low elapsed time and top speed on his way to earning an unprecedented $20,000 purse.

“I saw the win light, but Ferris being a relatively short track I was really kind of focusing on getting the chutes out and getting stopped,” the affable Californian said. “But we do have radios in the car and my car chief, Troy Green, he got on the radio and all he kept saying was, ‘$20K baby, $20K!’ I’ll never forget that as long as I live. That’s when I started screaming into the radio, ‘Alright, $20K, let’s go get paid!’ And you know, it was a great moment, very exciting.” 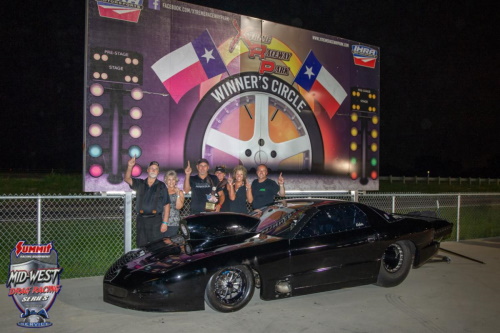 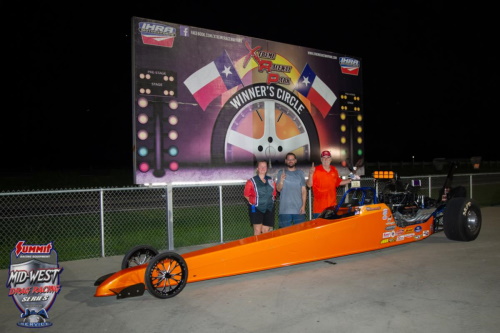 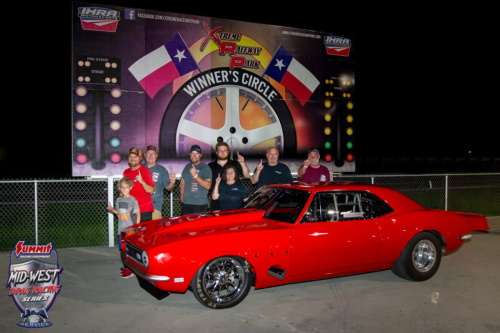 Starting from the number-two slot, Justin Curry raced to the MWDRS X275 win at XRP, beating fellow Texan J.D. Campbell in the final round. 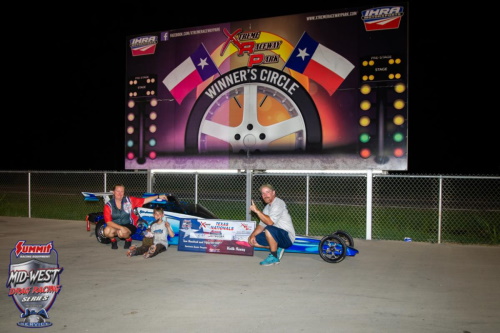 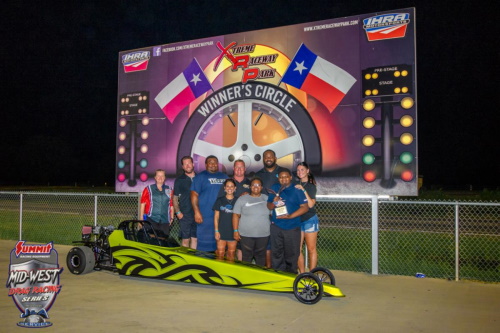 “We couldn’t be happier with how our first race under the Mid-West Drag Racing Series banner went,” MWDRS Events Director Ellen Eschenbacher stated. “Thanks to Summit Racing Equipment and J&A Service, as well as all of our other great marketing partners, we were able to really step up and put on a great show for a really impressive crowd on hand. Clyde and his track crew, along with all our Mid-West Series staff, did a wonderful job under some really hot and humid conditions all weekend long.”

Satterfield started from the number-two position in the 15-car Pro Mod field, just one-hundredth of a second behind a 3.74 at 201.79 by Sackuvich in the top spot. In eliminations he ran through Kurt Riffel, Bob Gulitti and Tommy Cunningham, while Sackuvich enjoyed the first-round bye, then beat Kevin Hargett and ran unopposed in the semis after Ronnie Hobbs crashed following a quarter-finals win over Scott Oksas.

Running in the right lane, Sackuvich gained a slight holeshot for the final, but both cars lost traction by half track, where Satterfield was able to recover quicker and post a winning 4.01 pass at 190.60 mph, while his opponent slowed to 5.11 at just over 90 mph.

“It feels great to finally win one, but the credit really has to go to my Bob (Gardner) for the tune and to Mark Menscer for the shocks and suspension,” Satterfield insisted. “This package that Mark has put underneath this car, when I pedaled it just instantly hooked and took off again. It felt incredible.”

On the alky flopper side, the significance of competing in the first race with a new organization was not lost on Bellemeur.
“You know, with the hype leading up to the race, of course with the money being involved as well, but just the fact that we, as an entire class, had something new to look forward to, that was really exciting,” he said. “Especially with having the uncertain times right now, who knows what’s going to happen moving forward? So just the fact that we’ve got the wheels turning on something new, it’s really cool, really exciting not just for our team but for everybody in our class.”

Crew chief Steve Boggs gave Bellemeur a 3.64-at-211.67 tune-up in team owner Tony Bartone’s Hussey Performance Camaro to sit atop an eight-car qualified TA/FC field. During qualifying, Bill Bernard was forced to withdraw with chassis troubles and Jonathan Johnson was uninjured in a top-end crash after his chutes didn’t deploy and his car hit both walls in the shutdown lanes.

“You know, Doug’s a California guy just like me and I’ve known the Gordon family for a long time, but we’re both fierce competitors on the track. Doug’s a great driver and that’s a tough team to beat,” Bellemeur said. “But when it was all over Doug and I met down at the other end and I think we knocked the paint off our helmets in giving each other a big hug. What a fun night it was; what an exciting thing for our class as a whole.”

The Mid-West Drag Racing Series–featuring Pro Modified and Top Alcohol Funny Car–will resume action Aug. 14-15, with a return to World Wide Technology Raceway at Gateway, near St. Louis. In September the Tulsa-based series will stage a double points event for all classes at 131 Motorsports Park in Martin, MI, followed by the MWDRS World Finals at Osage Casino Tulsa Raceway Park in October.

The Summit Racing Equipment Mid-West Pro Mod Series is an all-eighth-mile, no-profit organization funded entirely through marketing partnerships and passed along to benefit MWPMS host tracks (typically about $10,000). The Mid-West Pro Mod Series also provides trackside sponsor banners to be displayed at each event, on-site PA sponsor announcements, and links to each company on the MWPMS website (www.MidWestProModSeries.com), plus an extensive social-media presence, texts and e-mail blasts, and commercials during all events. Complete class rules are posted on the MWPMS website.