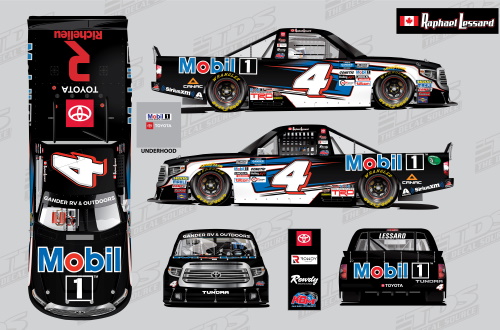 Saint-Joseph-de-Beauce (Quebec, Canada (July 18, 2020) – Raphaël Lessard Racing and Richelieu Hardware are proud to announce the signing of a partnership for the upcoming NASCAR Gander RV & Outdoors Truck series (NGROTS) doubleheader event at Kansas Speedway on July 24 and 25. Raphaël Lessard will proudly display on the bedtop of his Toyota Tundra #4 the colours of this Quebec-based group that manufactures, imports, and distributes specialized hardware and complementary products for the furniture, construction and woodworking industries.

This commitment by Richelieu Hardware is the result of the joint efforts with Raphaël Lessard Racing to support the young driver’s development program. “When we were approached to be part of Raphaël Lessard’s team, we saw the opportunity to encourage and promote the young driver’s exceptional talent in the NASCAR truck series, as well as partner with a motivated individual showing a “winning” attitude and spirit. We wish him many victories, as well as achieving and along the way the recognition he seeks and deserves in the racing world,” said Richard Lord, President and CEO of Richelieu Hardware.

For Raphaël Lessard and his team, this new partnership is an additional motivation, especially in these difficult times. “The arrival at this time of a new partner such as Richelieu Hardware is really encouraging for the team and we want to represent them as well as possible. There are many races left in the season and we are improving every time out,” said the driver of the #4 Toyota Tundra.

Since the age of 11, this young racer has been concentrating all his efforts on achieving his one goal: to race at NASCAR’s highest level. His full-time participation in the 2020 season of the NGROTS is a major steppingstone in the pursuit of his career goal. Unfortunately, the current world health situation has complicated racing activities and his on-going development program, despite the best efforts of his team and of the NASCAR community. Given this situation, Raphaël Lessard continues to work all-out on his physical and mental preparation that is part of his program with the leading Kyle Busch Motorsports (KBM) team and Toyota Racing Development (TRD).

Raphaël Lessard’s results over the first seven races of the season present a mixed picture. The KBM team always gives him a potential top-5 or even winning Toyota Tundra truck despite the elimination of pre-race testing and qualifying. In fact, the young driver usually runs the same pace as the leaders early in each race, even on tracks that are new to him. However, the draw process for setting the starting grid automatically relegates him between the 11th and 20th position, according to his car owner’s points this season. He is thus forced to drive through the field towards the lead pack, which he has done repeatedly almost every time out so far this season despite encountering traffic and a few incidents along the way that push him out the lead pack.

“I am proud of our performance in Kentucky. The race was stopped before the start of the third (final) segment, so we were unable to show how good the truck was after the great work done by the guys and my spotter earlier in the race. I am sure we would have finished in the top-3, and a win was within reach as the truck was that competitive. We worked hard over the first two segments to make it that good. I was able to learn the right lines to follow at this new track for me right from the start and to move up the field. In the second segment we fine-tuned the suspension and tire pressures and I adjusted my driving accordingly. Overtaking became more efficient, and the team improved the suspension settings to make the truck quicker in turn 1. Thanks to this work, I improved by 0.5 seconds per lap. We are ready – Bring’em on!” concluded the 19-year-old. 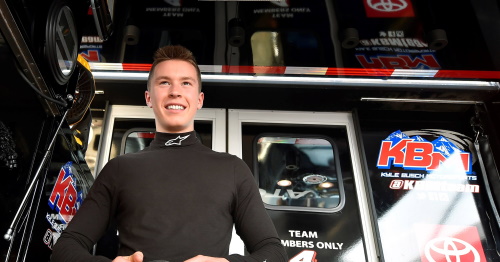 Raphaël Lessard will be on track this weekend at the Texas Motor Speedway (July 18, Fort Worth, Texas, USA). Follow the action on RDS (8 pm – ET), FOX Sports 1, MRN and Sirius/XM NASCAR 90.

Richelieu is a leading North American distributor, importer and manufacturer of specialty hardware and complementary products. Its products are targeted to an extensive customer base of kitchen and bathroom cabinet, storage and closet, home furnishing and office furniture manufacturers, residential and commercial woodworkers, door and window, and hardware retailers including renovation superstores. Richelieu offers customers a broad mix of products sourced from manufacturers worldwide. Its product selection consists of over 130,000 different items targeted to a base of more than 90,000 customers who are served by 82 centers in North America – 40 distribution centers in Canada, 40 in the United States and 2 manufacturing plants in Canada.

Since debuting in 2010, Kyle Busch Motorsports (KBM) has quickly established itself as one of the most successful teams in all of NASCAR. Owned by 2015 Cup Series champion Kyle Busch and fueled by his passion for winning, his organization holds the Gander Outdoors Truck Series records for most team wins (78) and most team wins in a single season (14 in 2014). In addition to collecting a series record six Owner’s Championships, the organization has produced two championship-winning drivers; Erik Jones (2015) and Christopher Bell (2017).

F.R.L. Express Inc. is a general transportation company founded in 2004 by François Lessard. Its main field of activity over the last 15 years is general transport in closed trailers over short and long distances in Canada and the United States. FRL currently have about 50 employees in addition to about ten tow carriers. FRL owners are proud of the progress made in recent years thanks to the FRL team members and wishes to continue on this positive note. “Our employees, customer service and satisfaction are our priorities. We are all proud to be partners in the success and achievements of our son Raphaël Lessard,” state the proud parents.

Born on July 5, 2001, in Saint-Joseph-de-Beauce, Quebec, Canada, Raphaël Lessard is one of the most promising prospects in North American oval racing. Raphaël made his debut in stock-cars in 2013, on local tracks in the Quebec City area. His exceptional talent quickly allowed him to climb the ladder and attract the attention of David Gilliland, a former NASCAR Monster Energy Series driver and now a team owner, in 2015. An agreement then allowed Lessard to participate in the last four races of the season in the PASS North Tour Series.