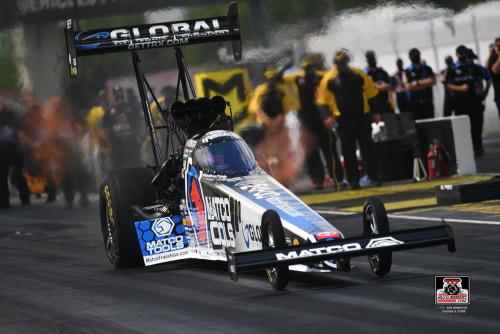 The Competition: No. 13 Pat Dakin

Quotable:
“After qualifying, I’d say that our dragster did good this weekend. I’m really proud of my guys and also the Global car with Tony. We qualified four and five and that’s not bad given how hot it was. We wished the conditions were a little bit better for the second run because we were leaning on it to be better and improve our qualifying position. We pushed a little too much, but we’re ready for race day tomorrow. It’s a tough first-round matchup with Pat Dakin and it’s going to be interesting. We’re in a good position. We have lane choice and that’s what steps up your race day, qualifying well. I’m just very pleased where this Matco Tools/Global Electronic Technology/Toyota/Hangsterfer’s team is headed.” 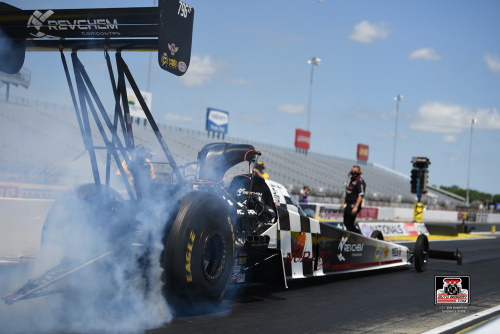 Quotable:
“It was very hot out today and we raced in conditions we rarely see. We’ve had two weeks to get this right and we failed. I’ll get with my partners to see if we can move forward. My hats off to everyone at DSR. It’s a fantastic group. I know the car is badass. I do. The canopy is great to drive. We just couldn’t get down the track, and I say ‘we’ because it takes a team to do this. It’s disheartening. I need to thank everyone who has supported us the past two weeks, Nordic Boats, Revchem Composites, Fatheadz, and Mopar and Bill Estes for giving me that awesome Jeep to drive all week. I hope we can do this again soon.” 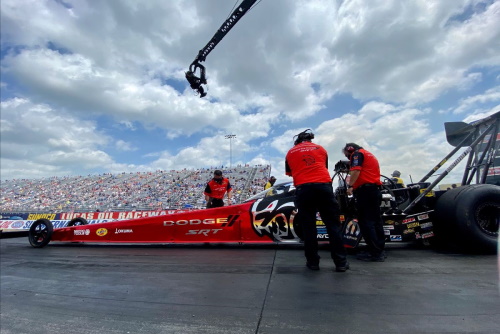 The Competition: No. 15 Lex Joon

Quotable:
“What I love about racing are the constant challenges that are thrown at you. (Crew chiefs) Todd (Okuhara) and Neal (Strausbaugh), have been putting in the extra efforts on Cory’s (McClenathan) dragster, and I had to qualify in Factory Stock (Showdown) with the Dodge Drag Pak for our first race this weekend in that class. Everything about this DSR operation is elevated this weekend with us running 10 cars. It’s great to see more fans here today, and this has to be one of the most humid races we’ve ever run. It feels like Florida more than Indy. We’re looking forward to race day, another early start in the morning, and we’re planning on building on last weekend and going more rounds.” 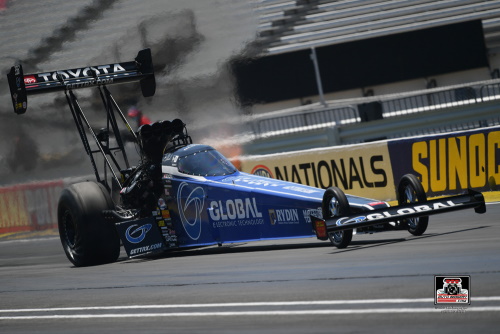 The Competition: No. 12 Terry McMillen

Quotable:
“It was just a great day. We made two really outstanding runs down the track. We ended up in the fifth spot and as hot as it is out, and the few runs we have with this car, (crew chiefs) Brian (Corradi) and Mark (Oswald) did a great job. Working with Antron (Brown) and it’s been a fun, fun weekend. It will be different tomorrow with the early start. Conditions will be cooler and different, but all-in-all, we have a really good race day car.” 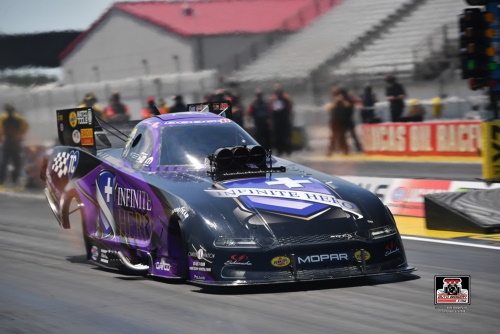 The Competition: No. 11 Chad Green

Quotable:
“If you’re going to go one-for-two in qualifying, we did it the right way. We unloaded with a good run and then we took a shot and missed it, but that’s okay. We know how to back up from that tomorrow. Last weekend when we missed it on the first run, you go up for the last qualifying session biting your nails and it’s too much stress before race day. Once again, we have a great car and it looks like there will be great competition out there tomorrow. The cars I fear most all say DSR and the (Bob) Tasca car with DSR parts. We have to beat a lot of good cars and if we can do that, they’ll hand us the trophy.” 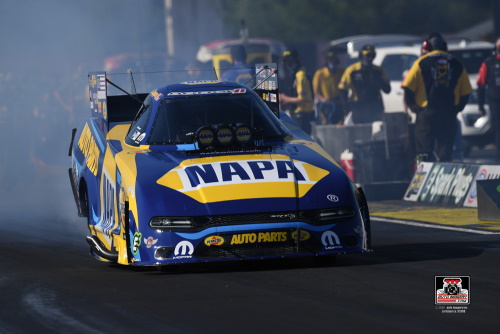 The Competition: No. 13 Matt Hagan

Quotable:
“Obviously, it’s a tale of two weekends. We were so disappointed in ourselves for not qualifying better last weekend and putting ourselves in the position of having to run the No. 1 qualifier who was our teammate Tommy Johnson. Today, we finished the first session as the No. 2 qualifier. We tried to push it in Q2, we wanted to go for the pole, we thought we could run a mid-3.90 and that was the time to try it. Unfortunately, we didn’t think the position we were in was going to lands us with a round one matchup with our teammate Matt Hagan. That’s a tough car right now, they’re coming off a win and running great. We start earlier in the morning so the first round will give us the best conditions we’ll see all day. It’s going to be triple digits with the heat index, and usually, the NAPA team is really good in those conditions. First-round is going to be really tough, like a final round, but I’m confident in my team and we’ll go up there and do our best.” 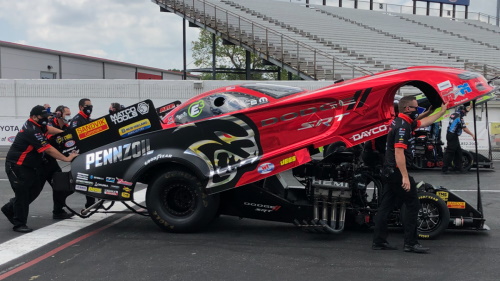 The Competition: No. 4 Ron Capps

Quotable:
“With just two qualifying shots, it’s far more nerve-wracking when you get up there to the water box. I’m sure plenty of drivers felt that stress level last weekend like we did today. (Crew chief) Dickie Venables did what we needed to do to get in the show and we get to race tomorrow. A hot, greasy race track is always tricky to navigate. We have this awesome brand-new paint scheme with the chrome red Hellcat Redeye and it’s a beautiful car. It looks fast and we have to make it fast and if we do that, we’ll end up in the winner’s circle again.” 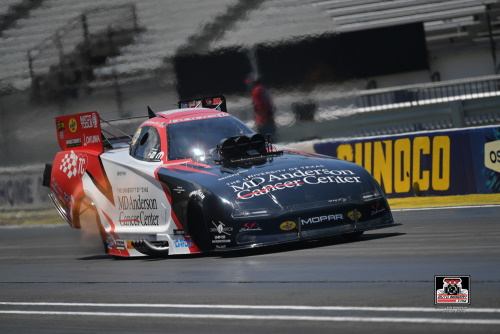 The Competition: No. 15 Bob Bode

Quotable:
“This two-run qualifying deal puts a lot of pressure on the teams. It’s interesting to see everybody have trouble on the first run and that puts a lot more pressure on that Q2 run to get in the show. To come out and go from fifteenth to No. 1 and end up second is great. Hats off to (crew chiefs) John (Collins) and Rip (Reynolds) and this team. We have a good race car, just trickier track conditions than we saw last weekend. It will probably be trickier tomorrow with the heat, but that 4.01 in the last session was solid and that sets us up for a good race day.” 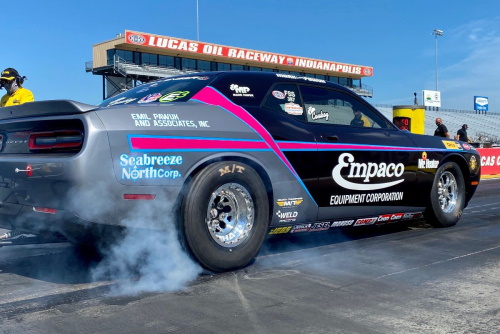 The Competition: No. 5 Arthur Kohn

Quotable:
“It’s great to be back behind the wheel of my Dodge Challenger Drag Pak. It’s been a very hot and humid few days in Indy, but we were able to get the car hooked up to the track and qualify No. 12. We’re looking forward to tomorrow and it’s so great to be in competition after being off for four months. We’re going to do the best we can to get this Drag Pak to go some rounds tomorrow.” 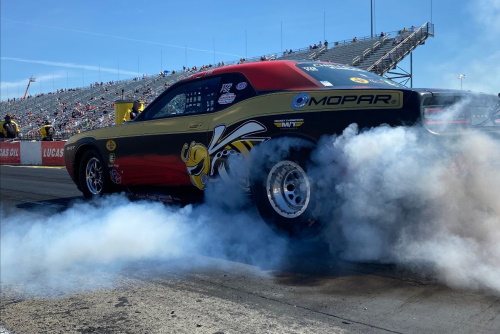 The Competition: No. 1 Chris Holbrook

Quotable:
“Just like race cars do, sometimes they have a couple of issues. Ours happened to be in the belt power strain, and luckily, we tested yesterday and thought we almost had it cured. We broke a belt on Q1, and it created a very high-pressure situation of leaving just one qualifying attempt to get in the field and I’m very proud of (crew chief) Kevin Helms, Terry Snyder, and this entire Mopar crew for getting this car down the track. We made a moderate Q2 run to get in the show, which made for some scary times, living on the edge, but we thrive on that. Mark’s (Pawuk) car is running well, and we’re going to pick it up from there. I have a really heavy matchup, No. 1 versus 16, and (Chris) Holbrook is not one to take lightly. We came here to compete, and you’re going to see some good competition tomorrow.”