WEST FARGO, ND (July 19, 2020) – Darrell Lanigan had seen enough of the Brandon Sheppard show. After four wins brought B-Shepp into contention for Lanigan’s win streak record and got him closer to the top of the all-time wins list, the Bluegrass Bandit stepped up and shut it down.

Leading the final 31 laps at Red River Valley Speedway, Lanigan offered up one of the most dominating displays of 2020 in his first breakthrough win of the year. Blowing by Ricky Weiss on lap 19 and storming by back markers left and right, the Union, Ky. native ran off into the West Fargo night with a monstrous 5.831-second victory as he lapped all the way up to ninth-place. 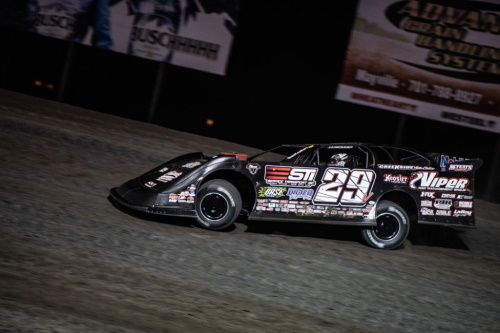 For Lanigan and his Viper Motorsports No. 29V Clements Race Engines powered Barry Wright Icon Race Car, Saturday’s triumph in North Dakota was the culmination of a resurgence that’s been building for almost two months.

“This has been a long time coming,” Lanigan noted in his first World of Outlaws win since September 21, 2019 at Port Royal Speedway. “I can’t thank all my guys enough. We’ve all been working so hard these last few months. This is cool. I’m excited for the rest of the year!”

Assuming the outside pole from the Morton Buildings feature redraw, Lanigan lined up next to Ricky Weiss of Headingley, Man., who had a perfect night going after setting Fast Time and winning his Team Drydene heat race. Keeping the momentum rolling, Weiss started hot in the 50-lap feature as he maneuvered the low line and built more than 1.2-second lead over Lanigan in the opening stages. 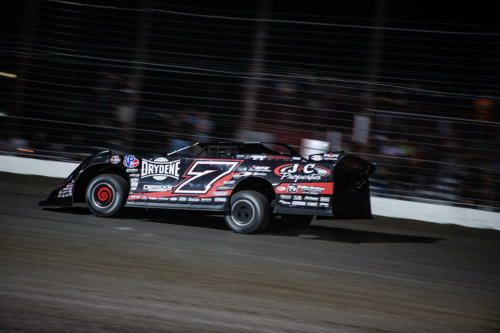 Weiss, who lives only 3+ hours across the border, had a perfect night going after Fast Time and heat win. (Jacy Norgaard Photo)

When lap traffic became a factor, however, the game changed. Biding his time trying to work the outside groove on, Lanigan’s lane paid dividends as he powered around the outside of Weiss on lap 20 and set sail on a masterful lap traffic route.

“I knew once we got up there and got it worked in that we could get going and we’d be good,” Lanigan said of his outside preference. “We finally got it rolled in there about when I passed Ricky and they actually started throwing stuff around there in the middle and I could run right through there later on.”

Pacing the rest of the nonstop $10,000-to-win feature, a smiling Lanigan climbed out in victory lane and stood in a cloud of confetti for the 74th time in his career; a win which puts him only three behind Josh Richards (77) in the chase for the all-time wins crown with the World of Outlaws Morton Buildings Late Model Series. It’s a record that Lanigan is still thinking about.

“I want to get back on top of that all-time wins list,” a determined Lanigan stated. 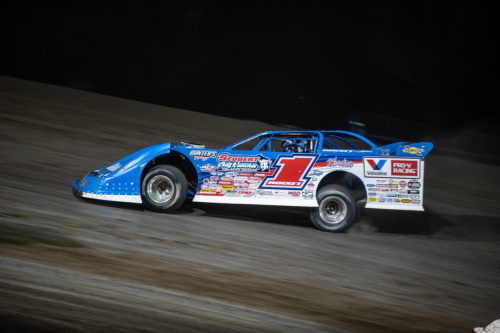 While the No. 29V was checked out and gone, the battle for second brewed between Weiss and a charging Brandon Sheppard. Striking for the runner-up spot with two laps remaining, “The Rocket Shepp” capitalized on lap traffic and snuck around Weiss for the second spot on the 48th circuit. It wasn’t the fifth-straight victory he and the Rocket1 Racing crew desired, but it was yet another solid night that helps pad their points lead in pursuit of a third World of Outlaws Morton Buildings Late Model Series championship together.

“I didn’t really know where he was running, but I probably could’ve moved up sooner,” Sheppard noted afterwards. “I don’t know if we had anything for Darrell, those guys were pretty solid tonight. Maybe a caution or two earlier could’ve gave us something, but still another great finish. All in all, another good night for us. This turned out to be a really fun race track. Hopefully we can come back here again next year.

Rounding out the podium in third-place was Ricky Weiss aboard his Drydene Performance Products No. 7 Team Zero Race Car. Falling just short of a clean sweep at Red River Valley, the Canadian still pieced together a consistent night and restored some confidence to a team that sits second in the point standings in only their second year on the tour.

“Another consistent night for us,” said Weiss. “I’ll take it. Hopefully we can get that win tomorrow. We’ve got a really great car right now.”

Chase Junghans of Manhattan, Kans. nearly got his second podium finish of the year, but settled for a fourth-place finish for Rocket Chassis No. 18. Ashton Winger of Hampton, Ga. continued his noticeable streak of front-running performances with his fourth top five of the year in the Franklin Enterprises No. 12. 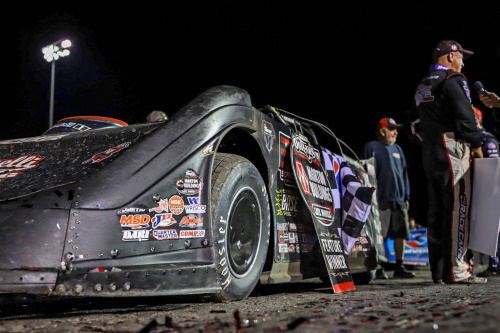 After running third in the opening laps, Cade Dillard of Robeline, La. dropped back to finish sixth aboard his MB Customs No. 97 entry. Dennis Erb Jr. of Carpentersville, Ill. slipped back to a seventh-place finish after storming to second early on. Dave Mass of East Bethel, Minn. was the highest finishing non-Outlaw and picked up the Bonus Bucks award with his eighth-place result. Scott Bloomquist of Mooresburg, Tenn. advanced from 11th to end up ninth in his Drydene No. 0. Closing out the top ten was 10x World of Outlaws Sprint Car champion, Donny Schatz, who made a rare WoO Late Models appearance in his home state.

Tomorrow, Sunday, July 19, the World of Outlaws Morton Buildings Late Model Series conclude the Northern Swing with a trip to Grand Forks, N.D. to race at River Cities Speedway for the 13th time in series history. Tickets will be available for purchase at the gate. Hot laps are scheduled to start at 6:00pm. If you can’t make it, DIRTVision will have all the action LIVE. 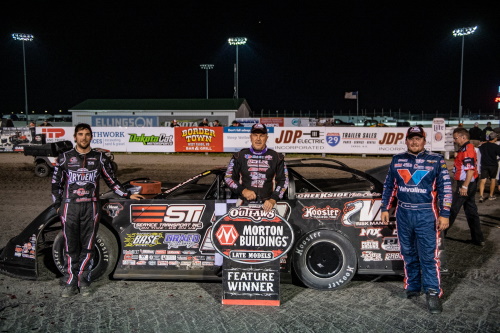