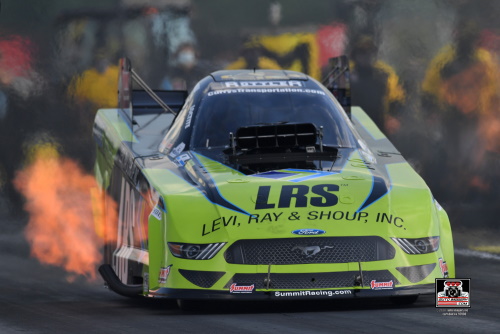 Brownsburg, Ind. (July 19, 2020) – One week ago, Tim Wilkerson and the Levi, Ray & Shoup Ford Mustang nitro Funny Car team logged a semifinals finish at the NHRA Nationals in Indy as a statement that they came to play. This weekend, they further anchored their early bid for the championship with one of the quickest racecars on the property at the Summernationals, the second consecutive event at Lucas Oil Raceway at Indianapolis.

Qualified in the No. 3 position, Wilkerson opted to be first pair out in his round-one meeting with Dale Creasy Jr. The ambitious stance paid off as the veteran pilot steadily drove the LRS Ford Mustang to 3.946-second pass at 320.28 mph to defeat his opponent’s 4.708 and send a chill down the spines of those strapped in behind him in their own Funny Cars. The LRS Ford was second-quickest and third-fastest for the round.

Saturday qualifying had been a toasty affair; the air had been heavy with water droplets that indicated an absurdly challenging dewpoint, and the sun was beating mercilessly on the racing surface. Sunday, though, turned up cooler and with the threat of summer storms.

After his first-round victory, Wilkerson and his devoted crew hustled to prepare for the quarterfinals. They pulled up to the staging lanes and cinched the driver into his racecar, but as they pulled up towards the waterbox, a Top Fuel dragster in the final pair dropped a cylinder and oiled the track. Wilk could only sit and watch the clouds move in as the scrubbers went to work on the racetrack to remove the offending liquid before a new layer of rubber was laid down.

“If I’d have been outside of my car, I could have done a couple of things differently, but you can second-guess yourself until you’re blue in the face,” he lamented. “We got up there and it was 119 [degrees Fahrenheit], and by the time we ran, it was 104. The weather got away from us, and there was no fixing it. Our LRS Ford did exactly what I thought it would do, though. It was just a little too slow leaving, stuck the tire, and didn’t move.”

“It was a really good race. No doubt about that,” said Wilkerson. “We had a good car last weekend, too. So, we’ll just not worry about it right now, get all our junk we beat up the last two races in a pile, tune it up, and then go on to the next one. I think we’ll be alright wherever we go. It seems like our LRS Mustang is very cooperative, and that’s the most important part of the whole thing.”

The next nitro event on the schedule for NHRA’s 2020 season of the Mello Yello Drag Racing Series is the NHRA Indy Nationals at Lucas Oil Raceway at Indianapolis, August 8-9. The schedule is subject to change. Go to NHRA.com/schedule/2020 to view the current schedule.

*Summernationals final round to be decided the the SEP 3-6 U.S. Nationals  due to weather