INDIANAPOLIS, IN (July 19, 2020) –What a difference one day made for Terry McMillen and the AMALIEⓇ Motor Oil Top Fuel team. After two tough runs in qualifying at the NHRA SummerNationals in Indianapolis, McMillen’s team rolled into race day as the No. 12 qualifier and facing a first round match-up with the winningest Top Fuel racer ever, Tony Schumacher. The AMALIEⓇ Motor Oil XTERMIGATORⓇ Top Fuel dragster was up to the task and not only advanced from the first round raced to a semifinal finish and a jump in the Mello Yello point standings. McMillen moved up to No. 9 in the points and is just six points out of seventh place.

“I think everything on that car was gone through with a fine tooth comb last night,” said McMillen, from his lounge at the end of the day. (Crew chief) Rob (Wendland) had the chance to look as some other things. We found a couple different spots that we needed to tickle differently. We did that and from then on it has been fast.”

The opening run today for McMillen and the AMALIEⓇ Motor Oil XTERMIGATORⓇ Top Fuel dragster was one for the ages. McMillen never trailed in the race, grabbing a string line advantage and posting low ET for the event. His winning elapsed time of 3.765 seconds at 320.66 mph propelled him into a second round match-up with three-time Top Fuel champion Antron Brown.

“You can walk back after that run with your chest sticking out a little bit,” Rob Wendland, McMillen’s crew chief. “(Hall of Fame crew chief and Wendland mentor) Austin Coil would let me look at runs. He told me what he liked about me was I looked at all the bad runs not the good ones. I knew I needed to know why it did something. If you figure that out that is a good mentality for tuning. Seeing your plan come together is very gratifying. We have been working to get to that run for a long time. It was showing us something but it was really hard to figure out. I kind of thought we were being too big of wimps with it and it was the right call,” Rob

In the second round McMillen again brought a strong race car to the starting line. Both drivers launched aggressively but it was McMillen and his Amalie Top Fuel dragster getting to the stripe first. Another strong run of 3.796 seconds which was again the quickest run of the quarterfinals set him up against T.J. Zizzo.

“The environment we are racing in is totally different,” said McMillen. “We don’t have four qualifying shots where you get to throw a home run shot on Friday night and move all the way to the top of the ladder. Everybody has had to make some adjustments to get the car down the track. You have to make sure you are qualified because race day doesn’t happen if you aren’t in. We came out on race day ready to roll and man, what a weekend.”

In the semifinal with a SummerNationals final round appearance on the line McMillen came up just a tick short. McMillen left the starting line first and was right beside Zizzo the entire length of the track but his performance fell off slightly, slowing his dragster to a respectable 3.891 second pass at 310.13 mph but it wasn’t enough for Zizzo’s 3.837 second run at 319.67 mph. While his day was wrapped up one round too soon for his taste McMillen has a ton of confidence moving forward with the rest of the season.

“The way I look at it right now any time we go to the starting line we are a threat. We can outrace any car out there on any given day. E3 here it just didn’t work our way. We dropped a hole early but we still ran a 3.89 which is pretty stout. There is just a little more fine-tuning and we will have it. The team and Rob did an amazing job. It was just the matter of getting the chemistry right with the parts and the team and we just went out there and made it happen. We made some statements today,” added McMillen. 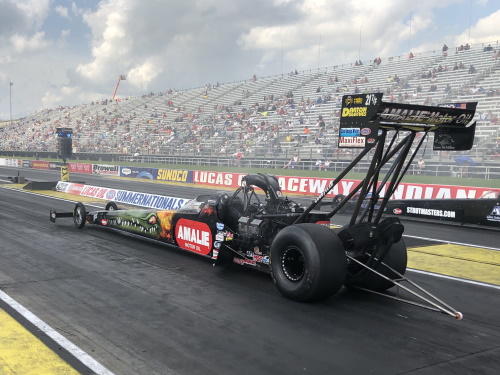