Brownsburg, Ind. (July 19, 2020) –Another national event Funny Car win was within sight as the second All-Dodge Charger SRT Hellcat final round showdown in as many weeks had Don Schumacher Racing (DSR) teammates Matt Hagan and Jack Beckman set to go head-to-head at the Lucas Oil NHRA Summernationals, when the skies opened up above the Indianapolis drag strip and spoiled the day.

Hagan, coming off an event win last week in another all-Mopar final against teammate Tommy Johnson Jr., worked his way through eliminations after qualifying 13th and was headed back into a battle for the Wally trophy with a new red, black, and chrome SRT Hellcat Redeye livery. For his part, after qualifying sixth, Beckman was poised for his 66th career and third final round appearance in four races this season, and was looking to add to the pair of wins he already had under his seatbelt in the Infinite Hero Foundation Dodge Charger SRT Hellcat.

No. 2 qualifier, Johnson Jr. began his day with wins over Bob Bode and Cruz Pedregon for a semifinal round match against Beckman. Johnson, who earned a Wally at Phoenix earlier this year, had the early lead but saw his 4.027 second run overshadowed by Beckman’s 3.969 to move on to the final. Johnson however remains second to Beckman in the Funny Car standings.

The Dodge Charger SRT Hellcat of Ron Capps had a solid qualifying performance that put the DSR driver No.4 on the ladder and gave him lane choice over his first round opponent. Unfortunately, for a second week in a row, that first round pairing was against a DSR teammate and last week’s race winner, Hagan. While Capps’ 3.967-sec./ 324.59-mph run was the third quickest of the round, it wasn’t enough to oust Hagan and his 3.931 sec/321.58 mph effort. 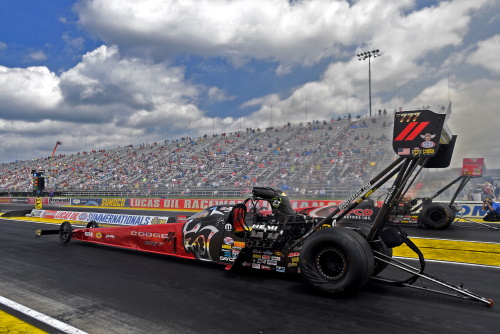 In Top Fuel competition, No. 2 qualifier Leah Pruett and her red-hot Mopar Dodge SRT Hellcat Redeye dragster looked solid throughout the weekend and early elimination rounds with first round victory over Lex Joon and a hole shot to beat Billy Torrence to advance to a semifinal appearance against Justin Ashley. Misfiring cylinders ended her hopes of beating Ashley but still put Pruett in second in the Top Fuel rankings.

Pruett pulled double duty this weekend joining Mark Pawuk for some SAMTech.edu NHRA Factory Stock Showdown action. The pair took their Mopar Dodge Challenger Drag Paks to their first elimination round runs of the year in the first of eight FSS events this season.

Sporting a fresh new livery on his Empaco Equipment Mopar Dodge Challenger Drag Pak, 12th-seeded Pawuk lined up next to No. 5 qualifier Arthur Kohn in the opening round, but his 8.135 second elapsed time run at 169.85 mph wasn’t quite enough to beat his opponent’s 8.057 sec. /170.88 mph pass to move on to the next round.

A similar fate awaited Pruett who, from her 16th place qualifying position on the ladder, drove her Angry-Bee themed Mopar Challenger Drag straight down the lane to post a 8.200 second E.T. at 168.07 mph but wasn’t able to challenge No. 1 qualifier Chris Holbrook’s 7.980 sec./ 174.55 mph pass.

The pair will get back in their drag paks next month at the second FSS event of the season, scheduled to take place at the NHRA Southern Nationals at Atlanta Dragway (Aug 28-30).

Next on the updated 2020 NHRA schedule will be a third consecutive national event to take place at Lucas Oil Raceway in Indianapolis, replacing the previously slated 32nd edition of the Dodge Mile-High NHRA Nationals at Bandimere Speedway near Denver, Colo., on Aug 7-9. The Dodge-sponsored event, which boasts the longest continuous sponsorship in the NHRA and one of the longest in all of motorsports, has been postponed due to pandemic-related issues, but hopes to be rescheduled for a later date this season.

“In a lot of ways these races will have a little asterisk next to them, what’s not going to be different is the trophy. It’s the exact same size as every other Wally we’ve earned. It’s going to mean just as much. We’re going to work just as hard for it. Whether we run tonight, tomorrow or in three weeks it really doesn’t matter to me. We have a car and a team that can adjust. We struggled in qualifying and they worked hard and figured it out. The car came around and we’re in another final round and someone is getting a trophy. I don’t care when they run it, we’re gonna run our tails off.”

“We were on a roll today coming off the win last weekend. We have a beautiful car with the red chrome Hellcat Redeye. It’s definitely one of my favorites in the 12 or 13 years I’ve been with DSR. I’d love nothing more than to put it in the winner’s circle for Dodge and Mopar and then the rain rolled in. You never know what will happen for weather and I’m glad we have lane choice, but Jack’s (Beckman) car is really good. That’s a strong team. All of the DSR cars are. We’re ready to go. No matter if we race tomorrow or in three weeks, I have all the confidence in Dickie Venables and this team.”

“It was another good weekend for this MD Anderson Dodge team and we’re just keeping our momentum going. Another solid qualifying effort and some more round wins. We just didn’t have enough in the semis against (Jack) Beckman, but I’m very happy with how our team is performing. (Matt) Hagan’s car is running great and it’s shaping up as a three-way DSR Funny Car battle for the championship and I’m glad we’re a part of it. It’s fun. We’re getting quite a bit of data for racing here and in hot, humid conditions and that will continue to benefit us during these summer months. We get a few weekends off and the team needs that before we get to go after that Wally trophy here at Indy in three weeks. “

“We had a really great hot rod and were really happy with how we ran in qualifying. Sometimes with luck of the draw you end up racing Matt Hagan and (crew chief) Dickie Venables first round and that is just how it goes. You know when you pull up to the line they are going to swing at it, so we had to swing right back, and we did. It was a great run. The NAPA guys and (my crew chief) Rahn Tobler did a great job getting our car ready. Our run would have beaten just about any other car in that round with us running third-lowest E.T. Unfortunately, it just wasn’t the run we needed today. We have shown as a team that we can run with the best, and I’m really looking forward to getting back here in three weeks.”

“I do feel that we have the best horse on the property between qualifying well and going rounds on Sunday. Unfortunately, we had a couple of holes (cylinders) out early against Justin (Ashley) in the semis and we kicked the belt off. They had issues too, so that makes it a bit tougher. What works best is when the crew chiefs, team and me are on the same page and I felt we were today. I will say this is the best-looking Top Fuel car on the property. I’m excited for the Hellcat Redeye colors to run again, and we’ll keep picking up momentum and building on what we’ve learned the last two weekends and be ready to go in three weeks.”

“No matter what category you’re in, one day of qualifying with just two hits is a challenge. We got our two DragPaks qualified and we had to race the No. 1 qualifier (Chris) Holbrook. We tuned for the changing air and weather conditions. The package that we currently have is making it challenging to turn on win lights. We’re working very hard to change that, but in the interim we’re doing the best job with what we can. The result is that win lights will be hard to find. This is a very different class than Top Fuel where we can see progression from run to run. This particular class, progression happens on the dyno, at the shop, in making laps and with rule changes. We know that we don’t have an upper hand and it speaks a lot for Dodge and Mopar and our team to be fighting this fight and it’s a difficult run. We do see the light at the end of the tunnel and we know we can achieve what we have in the past with these Drag Paks.”

“It’s great to be back behind the wheel of our Empaco Challenger DragPak this weekend here at Indy. We qualified in a very tough field. We left well, but unfortunately we’re struggling to keep up. We’re going to keep working hard to find a way to create more power and see what we can do to be more competitive. It was awesome to see fans in the stands with everything going on with Covid. It’s nice to be out at the track and I can’t wait to make more laps at Atlanta and Indy in late August.”