HEBRON, Ohio (July 20, 2020) – Anthony Bertozzi, one of NHRA’s most decorated sportsman drag racers, passed another milestone Monday when he drove to the Top Dragster title during the rain-delayed final rounds at the JEGS SPORTSnationals. Bertozzi is now the most successful driver in the history of the event with five titles. 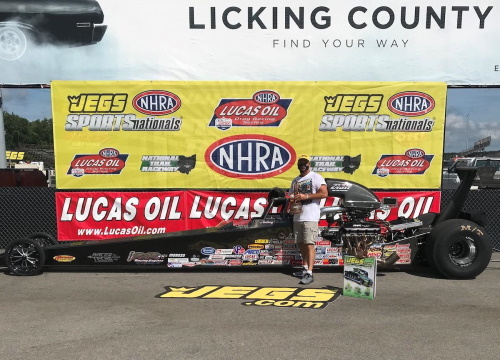 Bertozzi earned his 24th NHRA national event title when he defeated Team JEGS driver Mike Coughlin in the final round. Like Bertozzi, Coughlin also has experienced a tremendous amount of success in SPORTSnationals races with four previous victories. In one of the best side-by-side races of the weekend, both drivers were nearly perfect off the starting line, but the win light shone in Bertozzi’s lane after Coughlin broke out with a 6.16 on his 6.18-second prediction. Despite the loss, it was hard for Coughlin to call the weekend anything other than a success.

“We had a darn good time but we just came up a little short in the final,” said Coughlin, a five-time national event winner at National Trail Raceway. “I just took a little more than I wanted at the finish line but when you race a guy like Anthony, he’s one of the best, so you have to be on your game. It was close but I’m not disappointed one bit. 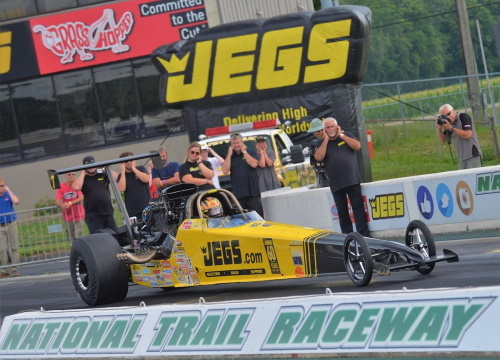 “This was my first national event of the year and my car was awesome. It was a good start to the season and if I had a chance to go back and re-run the final, I don’t think I’d change a thing.

“As a whole, JEGS Speedweek was great. This is the best turnout they’ve had in many years and the new management has done a great job with National Trail Raceway. They understand what it takes to succeed, and I was happy to see them have such a successful event.”

Meyer and Cox earned their titles in the North Central Regional event that was the first part of JEGS Speedweek. The reigning NHRA Top Alcohol Dragster world champion, Meyer was the low qualifier and reached the final where she defeated Mike Bucher with a run of 5.260 seconds. Cox also was the top qualifier in his Chevy Camaro-bodied Top Alcohol Funny Car and defeated two-time and reigning class champion Sean Bellemeur in the trophy round with a 5.468-second elapsed time.

Voges earned the fourth national event title of his career, and his first since 2007, when he stopped Greg Kamplain in the final of Comp Eliminator. Driving his ’32 Bantam roadster, Voges was first off the starting line in his final against low qualifier Greg Kamplain and held on for the win with a 7.613, his quickest run of the weekend. 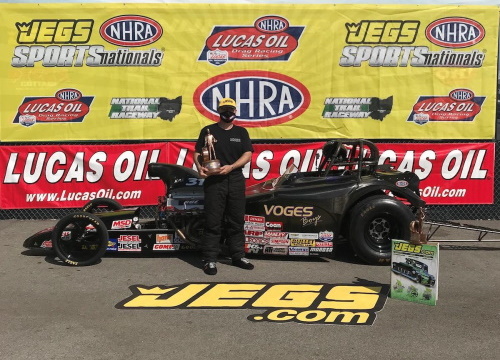 Dona is now a three-time winner in national event competition after claiming the Super Stock title over Todd Frantz. Dona, racing in his eighth national event final, was able to cruise to the victory after Frantz fouled at the start. The final was a rematch of the 2013 NHRA U.S. Nationals, which was won by Frantz, a two-time JEGS SPORTSnationals champion. 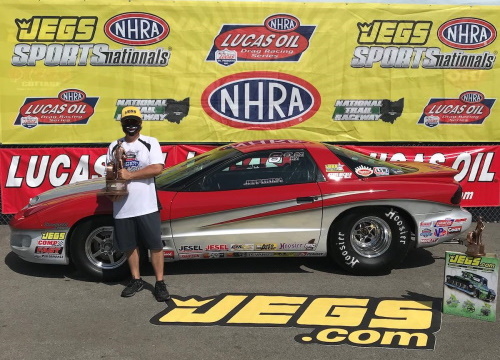 The Stock Eliminator class featured a first-time winner after Campolito outlasted a field of 140 entries before parking his ’96 Caprice in the National Trail Raceway winner’s circle. Campolito posted a dial-in prediction of 11.73 seconds and matched it perfectly in the final to beat opponent Bryan Merkle, who posted a 10.76 on a 10.73 dial-in. 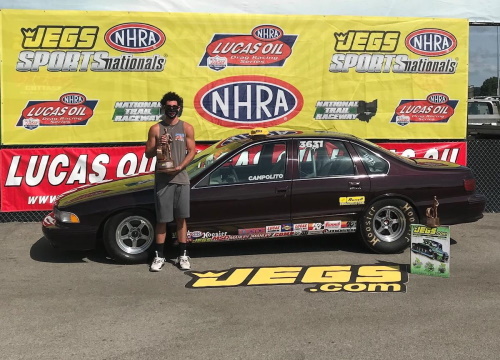 In 2014, Oakley won the Top Dragster title at the JEGS Northern SPORTSnationals and returned six years later to add another title after winning the Super Comp crown here. Facing world champion John Labbous Jr. in the final, Oakley gained a slight lead at the start and held on for a razor-thin victory with an 8.928 to Labbous’ 8.932. 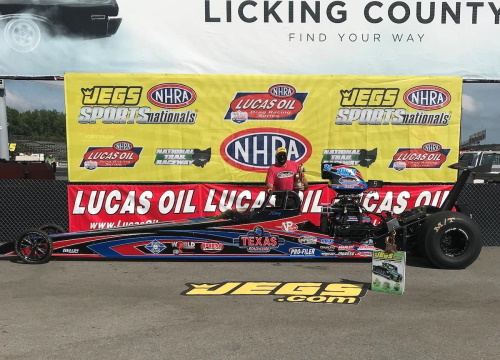 Nuest collected his second title in Super Gas following a final-round win against Sarah Becker. Driving his unique ’82 Dodge Rampage, Nuest matched the Super Gas index with a 9.906 to Becker’s 9.866-second breakout. Nuest’s only other national event win came in St. Louis in 2017. 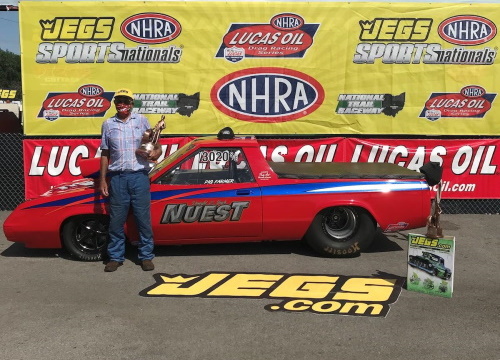 Smith lost last year’s Division 3 Super Street title via a tiebreaker but he’s now a SPORTSnationals champion after driving his ’82 Mustang to a perfect 10.90-second run in the final to stop Rocky Van Note, who had an early advantage, but broke out at the finish line. Smith’s only other national event final was a runner-up at the 2018 JEGS SPORTSnationals. 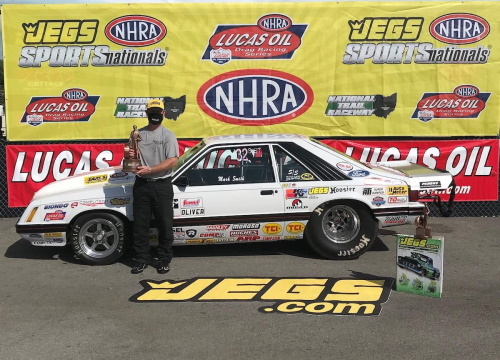 In Top Sportsman, Benoit claimed his second title when he topped Chris Osborn in the final round. Benoit gained an early lead and then drove his ’15 Corvette to a 6.57 on his 6.56 dial-in for the win. Osborn matched his dial with a 6.68 but couldn’t catch Benoit. 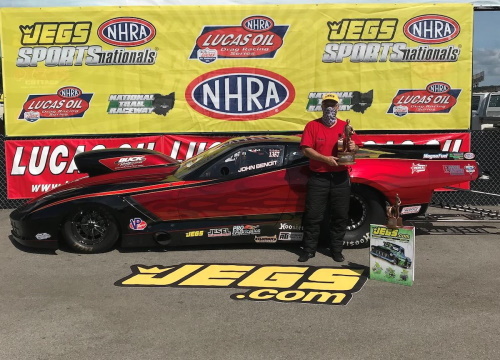 A pair of local racers met to decide the Sportsman Motorcycle title with Sauer, of Reynoldsburg, Ohio, riding to a victory against Zanesville’s Anthony Moore, who fouled at the start.