SARVER, PA (July 22, 2020) – Donny Schatz left Lernerville Speedway in September with frustration and a points gap he was unable to make up in time to deny Brad Sweet the 2019 title.

Ten months later, the 10-time Series champion left the Sarver, PA track Tuesday night with a trophy, a big check and the points lead over Sweet. 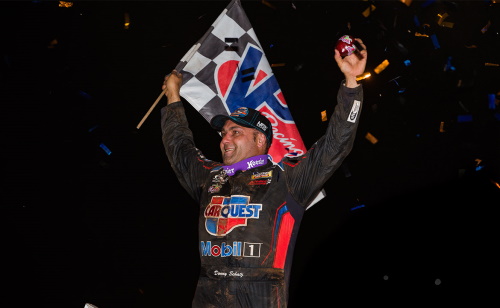 Redemption best describes the outcome, but astonishing, thrilling and spectacular defines his path to it.

Coming to the white flag, Schatz was running third behind Kyle Larson in second and Sweet in the lead. Five seconds later, he was the leader. A charge around the outside of Larson off Turn 4 and a slide job underneath Sweet going into Turn 1 propelled Schatz to his seventh Don Martin Memorial Silver Cup victory – his third win of 2020 – and the $25,000 top prize.

“It’s awesome to win the Silver Cup,” said Schatz, of Fargo, ND, in Victory Lane. “Third win of the year. Normally we’d like to have more, but we’re not going to get greedy. We’re going to keep racing the way we are and keep going.”

Schatz, Sweet and Larson positioned themselves for a good run early on by winning their Drydene Heat Races. However, Sweet put himself in the best position for the 40-lap Feature by winning the DIRTVision Fast Pass Dash and claiming the pole.

Sweet led the first six laps before Schatz, from sixth, ran him down and took the lead in Turn 1. Like a rehearsed dance move, the two slid side by side in unison through Turns 3 &4 with Schatz up high and Sweet low. Schatz had the better momentum off the corner and charge ahead of Sweet to run away with the lead.

While Schatz held command out front for the next 20 laps, Sweet found grip around the bottom and closed on the Advance Auto Parts #15 with 10 laps to go. Once he was close enough to see Schatz wheeling his Tony Stewart/Curb-Agajanian Racing ride, the two never left each other’s sight.

Sweet reclaimed the lead on Lap 28 and attempted to pull away from Schatz. He was unsuccessful as four laps later Schatz torpedoed his car underneath the NAPA Auto Parts #49 going into Turn 3. The two then drag raced side by side to the line with Schatz officially leading Lap 33. However, Sweet charged back ahead the next corner.

Their fierce racing brought Kyle Larson into the picture. Larson had been struggling on restarts, losing a spot or two each time. It wasn’t until he was able to run consecutive green flag laps that his Finley Farms #57 began to pick off cars and run down the leaders. He passed Schatz for second with four laps to go and began his hunt for Sweet. 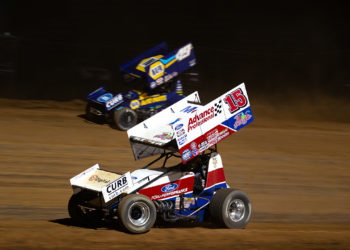 The three titans of the Sprint Car world were a car length apart from each other with two laps to go, leaving no certainty of who would leave the victor. Schatz, the furthest back, was at his time limit to make a move for the win and wasted no seconds to perfect his final charge at victory.

He ripped the top of Turns 3 and 4 to power around the outside of Larson coming to the white flag and then carried that momentum into a slide job underneath Sweet going into Turn 1 to reclaim the lead for the final time.

“It’s fun to race like that,” Schatz said. “Those guys are good. That’s what you guys pay to see. My crew did a great job. I think what won us that race is figuring out how to run the racetrack early in the race. I got hanging there at the end and had to move around. I got to traffic, and I wasn’t good on the bottom. The 49 could get down there. The 57 could go there. But that’s what ultimately won us the race. Those guys were choking down around there and we could carry speed through (Turns) three and four.”

Larson had his own last lap charge, diving underneath Sweet for second in Turn 4 and closed to Schatz’s bumper at the finish line. His last four finishes with the Series now include three wins and a runner-up finish.

“It was an exciting race there,” said Larson, of Elk Grove, CA. “The track changed a ton. It was hard to keep up with it… It was a fun race. Fun to have the three of us battling for the win there coming down late. Just came up a little bit short.”

While Sweet had to settle for a third-place finish, it marked the end to his bad luck streak of three DNFs in a row.

“Probably should have protected,” said Sweet, of Grass Valley, CA. “I don’t know if I would have still held them off. I kind of felt like I was hanging on a little the last few laps there. Just couldn’t quite get the momentum built back up.”

Along with the top-three, Jason Sides had an impressive night. After starting 21st and having to visit the work area twice, he worked his way up to a seventh-place finished and earned the KSE Racing Hard Charger award for the night.

With his win at Lernerville, Schatz is now only three wins away from a milestone 300 career World of Outlaws NOS Energy Drink Sprint Car Series wins and has reclaimed the points lead for the first time since he won the season opening race at Volusia Speedway Park. He currently holds a four-point lead over Sweet in second and a 30-point lead over third-place Logan Schuchart, who finished ninth.

This time, he’s leaving Lernerville with a smile.

The World of Outlaws NOS Energy Drink Sprint Car Series returns to Lincoln Speedway for the Gettysburg Clash presented by Drydene on Thurs., July 23. Get tickets by clicking here. 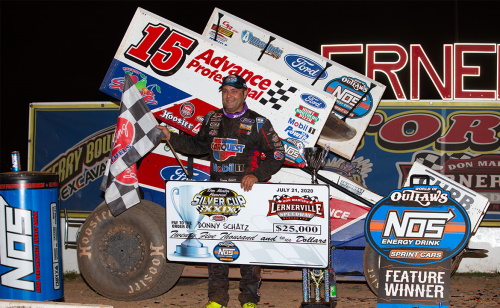