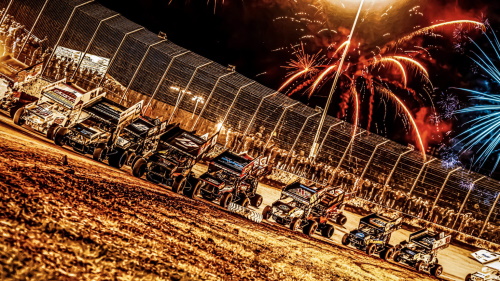 CONCORD, NC (July 23, 2020) — The World of Outlaws NOS Energy Sprint Car Series and partner tracks have worked closely with state and local agencies to bring some summer sizzle to the schedule by adding events across 10 different states to every weekend, eventually rejoining the originally scheduled fall races.

It all kicks off TONIGHT with the World of Outlaws battling the PA Posse in the Gettysburg Clash presented by Drydene at Lincoln Speedway followed Friday and Saturday by the Champion Oil Summer Nationals at Williams Grove Speedway.

August is as big as ever with the Series’ return on Saturday, Aug. 1, to Wayne County Speedway in Orrville, OH, for the first time since 1985 followed on Sunday, Aug. 2, at Indiana’s Plymouth Speedway. Tickets to both events are available at WorldofOutlaws.com. Local mass gathering regulations have forced an event that was to run July 31 at Attica Raceway Park to be canceled. Fans with tickets to the Attica event will receive a credit to their MyDirtTickets.com account and will have to call 844-DIRT-TIX to use that credit toward the Aug. 1 race at Wayne County or the 2021 Brad Doty Classic.

Two huge weekends follow beginning with the Aug. 7-8 Ironman Weekend at Federated Auto Parts Raceway at I-55 with fully open grandstands. The World of Outlaws NOS Energy Drink Sprint Cars “Return to Racing” included I-55 in May with Brad Sweet and Kyle Larson winning a couple of thrillers.

The next week, Aug. 13-15, is “The ONE & Only” at Knoxville Raceway featuring more than $400,000 in prize money, including the $50,000-to-win Brownells Capitani Classic presented by Great Southern Bank. Three World of Outlaws NOS Energy Drink Sprint Car Series races will run in place of the NOS Energy Drink Knoxville Nationals presented by Casey’s General Store. Limited three-day ticket packages are available in advance at WorldofOutlaws.com.

August wraps up on Saturday, Aug. 29, with a new event at U.S. 36 Raceway in Cameron, MO, followed on Sunday, Aug. 30, with a rescheduled event from earlier in the season at I-80 Speedway in Greenwood, NE. Tickets for both events will be available at WorldofOutlaws.com. Fans with previously purchased tickets to the race at I-80 can use those tickets for the Aug. 30 event.

September launches with the previously announced World of Outlaws return to Huset’s Speedway in Brandon, SD, during Labor Day Weekend, Saturday and Sunday, Sept. 5-6. Tickets are available at HusetsSpeedway.com.

The Series will remain in the Midwest and head to I-70 Motorsports Park in Odessa, MO, for what will now be two separate events on Friday and Saturday, Sept. 11-12. Fans with tickets for the originally scheduled single-day event will have their tickets rolled over to the Saturday race, and can purchase tickets to the Friday event at WorldofOutlaws.com.

The last remaining open weekend before rejoining the existing schedule will include two events that were postponed earlier this season. First will be Oklahoma’s Lawton Speedway on Friday, Sept. 18, followed on Saturday, Sept. 19, by the $20,000-to-win Texas Outlaw Nationals at Devil’s Bowl Speedway in Mesquite, TX. Unfortunately, with severe mass gathering restrictions in place in Paige, TX, the postponed event at Cotton Bowl Speedway will have to be canceled. While fans can purchase tickets to the Lawton and Devil’s Bowl races at WorldofOutlaws.com, those with tickets to Cotton Bowl will receive a credit for the face value of their ticket in their MyDirtTickets.com account. If a refund is preferred, CLICK HERE to request a face value refund.

All events, including The ONE & Only at Knoxville, will be broadcast on DIRTVision to Fast Pass subscribers.

For all the latest updates and information, visit WorldofOutlaws.com and follow on social media.