ABBOTTSTOWN, PA (July 24, 2020) – When Sheldon Haudenschild pulled his NOS Energy Drink #17 car into Victory Lane at Lincoln Speedway Thursday night, he got more than a trophy and shower of confetti. He got redemption.

The Wooster, OH driver missed transferring to the Feature at Lincoln in 2019. This year, he entered the Gettysburg Clash presented by Drydene on a streak of 16 top-10s in a row – nine of them being top-five finishes – and carried that momentum to his first World of Outlaws NOS Energy Drink Sprint Car Series win of 2020 and first at Lincoln Speedway. 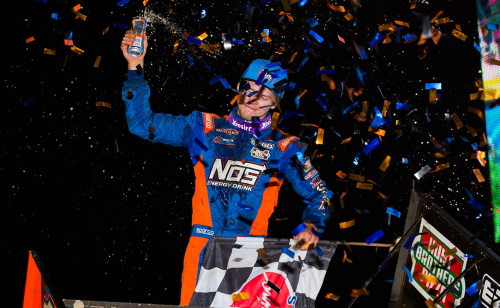 “It definitely feels good, man,” Haudenschild said about the redeeming win. “We were good all night. It definitely feels good to get a win for my team. It’s kind of settled the pain to just be really consistent and gaining points. That’s been a positive. Definitely want to win. These (Stenhouse Jr.-Marshall Racing) guys deserve to win. That’s what we want to do.”

His strong run started with a second-place finish in his Drydene Heat Race and then a win in the DIRTVision Fast Pass Dash, which he won by 2.4 seconds.

However, Jacob Allen looked to put an end to Haudenschild’s hunt for the win by charging from third to the lead on the first lap of the 35-lap Feature.

Allen, of Hanover, PA – just minutes away from the speedway – looked poised to claim his first career win in the early stage of the race. He gapped Haudenschild by over a second in the opening laps before catching traffic on Lap 7.

Haudenschild closed in, but Allen was able to keep his Drydene #1A ahead of the NOS Energy Drink car, even while darting high and low to maneuver around the slower cars. Allen ran the top and Haudenschild couldn’t find the grip to pass him low. However, Allen switched to the bottom while racing through traffic, giving Haudenschild his preferred top lane.

On Lap 14, Haudenschild flipped the switch and rocketed around the outside of Allen through Turns 3 and 4 to officially take the lead on Lap 15. There was then nothing Allen could do. Haudenschild ripped around the high side of the track like a man desperately trying to lose the hoard of hungry drivers behind him. Although, in clean air, the closest car to him was at least three seconds behind.

Cautions eliminated his massive lead twice, but even on a green-white-checkered finish, Haudenschild was still able to gap the field by a second on the restart.

“You never know where these guys are at,” Haudenschild said. “You kind of have to race like they’re on you the whole time.”

Allen was the one left to fend off the hoard of drivers behind him. First came David Gravel, who was unable to make the pass. And then came his Shark Racing teammate Logan Schuchart. The two Drydene sponsored cars swapped slide jobs each corner for a lap and a half before Schuchart got the upper hand and took second. 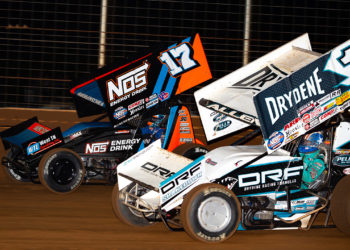 While Allen had to settle for a third-place finish, after leading the first 14 laps, he was still energized about his performance.

“It was fun,” Allen said. “I feel really good. I know I haven’t won an Outlaw race, but this year I feel so good physically and mentally… Sheldon rips. Logan rips. I gave it all I had. The wins are going to come.”

The podium finish is his first since earning a third-place finish at Devil’s Bowl Speedway in April of 2019. It’s also his third top-five finish this year, besting his performance last year where he only got two top-fives.

Logan Schuchart’s runner-up finish at Lincoln Speedway – also his home track – has helped him further cut into the championship points gap. He’s now 20 points behind points leader Donny Schatz and 14 points behind Brad Sweet, who is in second.

“I remember racing here locally, seven, eight years ago, and it’s been a struggle to get here. A long journey but we’re gaining on it,” Schuchart said about the Shark Racing team. “It’s nice to get a podium finish.”

With the consistency Haudenschild and his team have shown this year, he said he’s confident they’ll pick up more trophies and shower in more confetti.

“I keep telling these guys, ‘We’ll be consistent and win races,’” Haudenschild said. “It’s hard to tell your guys that and stay motivated with not winning a race until late July but we keep working… I have one of the best teams out there. No doubt.”

The World of Outlaws NOS Energy Drink Sprint Car Series returns to Williams Grove Speedway for the first of two nights of the Champion Racing Oil Summer Nationals on Fri., July 24. Get tickets by clicking here. 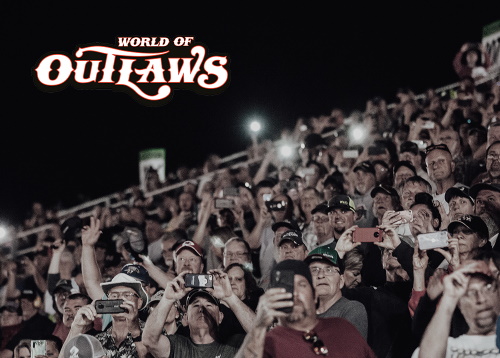