In the Jr. Dragster classes, Mallory Logan threw down a perfect 7.900 in the last pair of the second session to earn the provisional No. 1 spot in Coolshirt Pro Jr. Dragster. Maryland’s Zach Shirkey used his .004 reaction time to top the Gilbert Motorsports Top Jr. Dragster field. 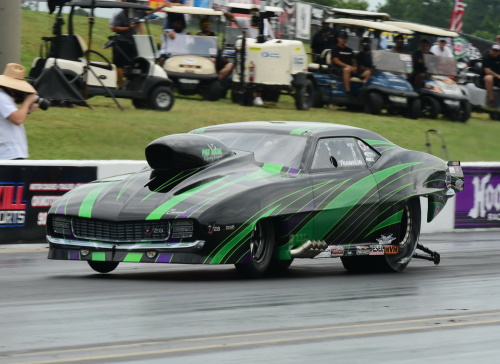 PRO NITROUS
Two-time Pro Nitrous world champion Tommy Franklin always enjoys performing well at Virginia Motorsports Park, as it’s not only the Fredericksburg, Virginia, native’s home track, but he also owns and operates the track with his wife, Judy. It was important to him to lay down a number like his 3.703 at 202.94 in his Musi-powered “Jungle Rat” ’69 Camaro, especially after winning the first two races of the season.

“I just think it makes it special that we don’t get our teeth kicked in when we’re here,” Franklin joked. “You come here and you want to do good in front of your home crowd. We never get time to test down here, so it’s not like there’s an advantage. But it is nice to do well in front of our friends and family that come down here to see us.” 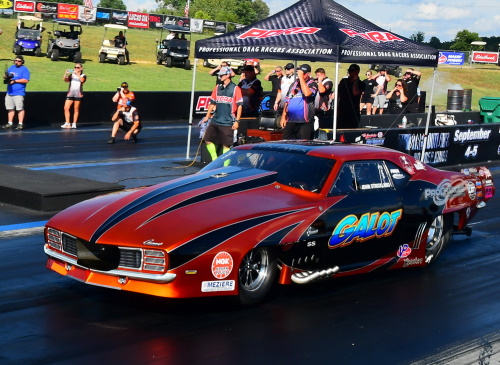 PRO BOOST
Points leader John Strickland wasn’t necessarily shooting for the No. 1 spot when he rolled to the starting line for the third and final qualifying session. It was simply a byproduct of his goal to change qualifying positions to get off the same side of the eliminations ladder as his teammate, defending Pro Boost world champion Kevin Rivenbark. Strickland’s 3.686 at 200.29 in his ProCharger-boosted GALOT Motorsports ’69 Camaro moved him just past Rivenbark, who ended up No. 2.

“The [Proline] guys have worked hard at making the car go fast. It just feels good,” Strickland said. “I was kind of surprised because we were lagging back. This last [qualifying session], I said I either have to fall way back or move way ahead because me and Kevin were on the same side of the ladder. We had to get off the same side even if I end up being last. Steve [Petty, tuner] says, ‘You’re moving up.’ It didn’t feel like a .68, but it was still a good, straight smooth pass.”

Rivenbark in his identically prepared GALOT Motorsports ’69 Camaro used a 3.696 at 201.64 to qualify second. Fellow Proline/ProCharger driver Johnny Camp followed behind in third with his 3.706 at 200.71. 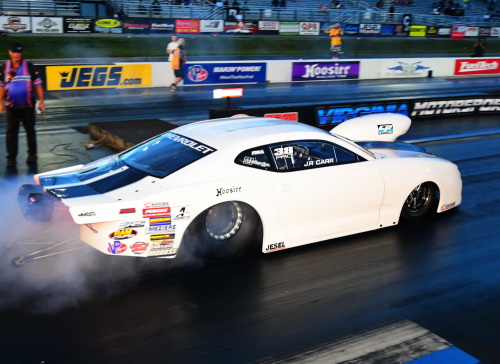 EXTREME PRO STOCK
A month after JR Carr’s first-ever No. 1 qualifier award and event win at the Carolina Showdown at Darlington, the Washington-based Extreme Pro Stock veteran found himself qualified No. 1 again on the strength of a 4.067 at 177.74. Tuned by Frank Gugliotta, Carr led all three sessions in his ’20 Camaro with a 4.09 and another 4.06.

“It feels really good to back up what we did a few weeks ago at Darlington,” Carr said. “Again, we have a bracket car. Every little change we made, it picked up just a tick. We’re really, really happy with our setup.”

Second-generation Mountain Motor Pro Stock driver Johnny Pluchino qualified a career-best No. 2 with a 4.078 at 176.88 in the Strutmasters.com ’13 Mustang. John DeFlorian Jr., back for his first race of the season, posted a 4.082 at 176.24 to qualify third. 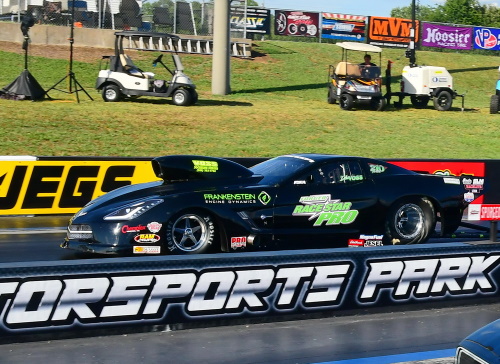 PRO OUTLAW 632
Since failing to qualify at the season-opening East Coast Nationals at GALOT Motorsports Park, 2017 Pro Outlaw 632 world champion Dillon Voss has been on a mission. He won the Carolina Showdown at Darlington in June, then added another accomplishment Friday when he drove his family’s nitrous-assisted Voss Racing Engines ’17 Corvette to a 4.239 at 169.57 to qualify No. 1.

“When we left GALOT, we kind of left everything there,” Voss said. “We knew what was wrong with the car, so we were able to fix our issue and capitalize on that at Darlington. We’ve got really good momentum now. We moved from last in points to fourth, and this weekend we hope to move to No. 1. We’re chasing this year’s championship like we chased ’17 pretty hard. Hopefully we can double up on the championship trophies this year.”

A similarly close battle for No. 1 took place in Top Sportsman 32, where Don Klooster and Donny Urban both posted 4.044 E.T.s in their nitrous-assisted entries. It was Klooster’s faster 175.96 speed that put him in the top spot going into Saturday’s final session.

TOP DRAGSTER
Ohio’s Bryan Keller steered his supercharged KB Trailer Sales dragster to a 3.783 at 198.52 to qualify No. 1 in Elite Top Dragster. He’s followed by the centrifugal supercharger-boosted dragsters of Michael White with his 3.825 at 190.78 and Chase Beverly with a 3.863 at 186.38.