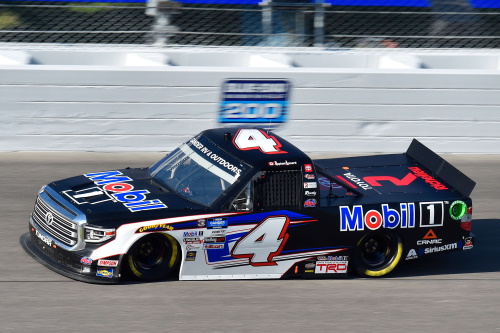 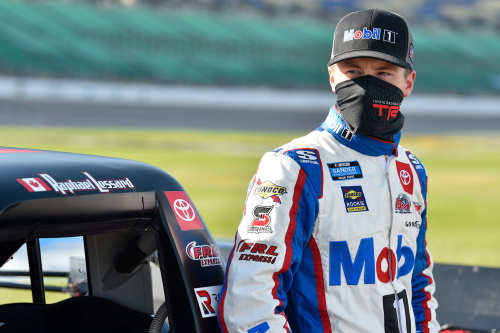 “Well, it was not the night we wanted at all. We were very, very loose. Just way too loose, especially on long runs. I felt like on short runs I could keep up with them, but as we run, it would just get super free on me. We will get better for tomorrow. We will work on it. We’ll talk with the team and my crew chief Mike Hillman. We will just try to get it tomorrow. It is going to be a different temperature tomorrow. I think the truck will handle a little bit differently. I’m just ready to get back at it tomorrow.”

Raphaël Lessard rebounded from a late-race tire issue that caused his No. 4 Mobil 1 | Richelieu Hardware Tundra to spin late in the race to equal his season-best result with an 11th-place finish in the e.p.t 200 at Kansas Speedway. 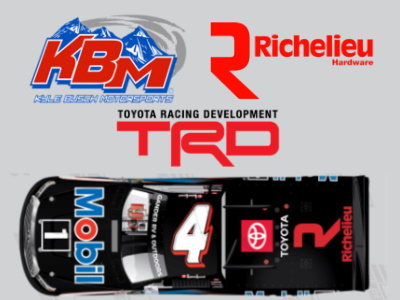 “Well, the race is over. It was not exactly the race we wanted, but we were better than yesterday. Our truck was way better to compete with those guys up front. We were just missing the opportunity. Every time we were coming through the field and making moves in the top-10, I felt like we would have a restart and do it all over again. Someone made contact with us at the end and we got a flat tire with 20 laps to go. We came back for an 11th place finish. You know what, we are getting better and better! I’m getting more comfortable. My crew chief Mike (Hillman Jr.) made some good adjustments all race long. I felt like I could feel those adjustments and feel the truck getting better and better, so that was a really positive thing for the day. We will keep on working. I look forward to going to Michigan and being even better there.”

After 10 events, Lessard ranks 15th in the NGROTS championship standings. The rookie of the year candidate sits 177 tallies behind points leader Austin Hill.

Lessard will be back behind the wheel of the No. 4 Tundra when the NGROTS resumes action on Friday, August 7, 2020, at Michigan International Speedway. Live coverage will be on RDS, FS1, Motor Racing Network and SiriusXM at 6 p.m. ET.