DAVENPORT, IOWA (July 29, 2020) – For the second time in as many races, the Davenport Speedway 1/4-mile delivered an absolute thriller with the World of Outlaws Morton Buildings Late Model Series in town. 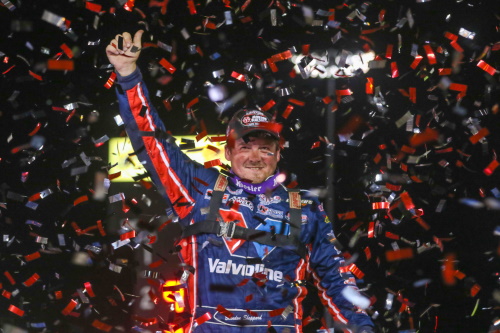 Six official lead changes highlighted the action-packed show which brought fans to their feet as they witnessed Sheppard go toe-to-toe and swap the lead multiple times with Cade Dillard down the stretch. A side-by-side battle for the lead not good enough? Well Jimmy Owens made it a three-way war throughout the closing half as three of the nation’s best fought wheel-t0-wheel and raced under a blanket for the win.

In the end, lady luck and lap traffic played a factor in the finish as Sheppard snuck by Dillard with four laps remaining and survived one final frantic sprint to the checkered flag to score his 66th career World of Outlaws Late Model Series win in stunning fashion. 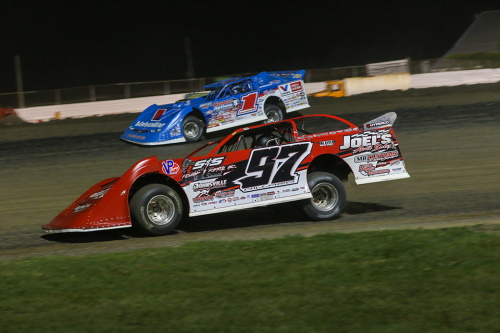 Along with Owens, Dillard (97) and Sheppard (1) gave the fans their money’s worth in Tuesday’s phenomenal feature. (Brendon Bauman Photos)

“It was crazy; I just don’t even know how to describe it,” an elated Sheppard said afterwards. “Cade and Jimmy are two of the best guys in the whole country to race with. You know they’ll run you clean and they know I’m gonna race them clean. That was just a blast to be a part of. I’m gonna have to go back and watch that whole thing on DIRTVision.”

Setting a New Track Record (13.979) and winning his Team Drydene heat race, “The O-Show” entered the Morton Buildings Feature Redraw as the favorite alongside fellow heat winners Chad Simpson, “The Rocket Shepp,” and “Thriller.” With Dillard and Simpson lining the front row and Owens and Sheppard behind them, the stage was set for a clash of titans from the beginning.

After Simpson – a World of Outlaws winner on the Davenport 1/2-mile in 2018 – controlled the opening five circuits, Dillard worked his way to the lead on lap six as he mastered the low line around the 1/4-mile. While the Robeline, La. native held the point, the action boiled behind him as Owens attacked Sheppard for second, and momentarily took it, before B-Shepp found a new level in the No. 1.

Acing the bottom as Dillard blasted the top, Sheppard methodically picked at the inside groove and capitalized on lap 19 by driving by Dillard down the backstretch to take command. A pair of lap 24 cautions halted the pace before a lap 28 stoppage proved to be the final restart with Sheppard in control over a stout row two of Dillard and Owens. 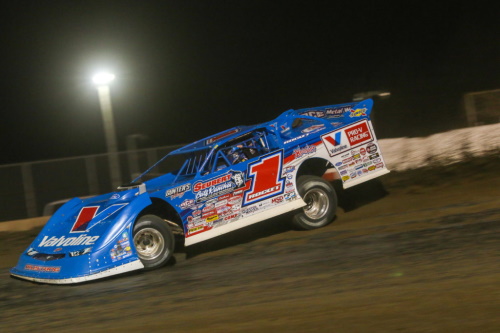 Tuesday’s triumph was the 66th career World of Outlaws win for Sheppard at a mere 27-years old. (Brendon Bauman Photos)

“The line just changes so much here,” Sheppard noted on the track. “I thought for sure we were gonna run around the top almost all race long, but I went down to the bottom just because I was alone down there and it ended up taking us to the lead. I mean what do you do, take the lead on the bottom and move to the top? It just didn’t seem like the right thing to do. So we bided our time down there on the bottom, even though I didn’t really want to. But the last time I was here and I was leading when a caution came out Ricky Thornton Jr. drove right by me on the restart, so I decided to go up top after those cautions.”

Sheppard’s switch to the high side opened the door for Dillard to occupy his lane on the bottom, which gave fans an intense side-by-side battle for the lead. Running neck-and-neck down the stretch, Dillard and Sheppard ensued to trade the lead it seemed almost every lap. In reality, Sheppard controlled laps 19-35, then Dillard took command off laps 36-37, Sheppard stole it back on lap 38, and then Dillard again snatched it away on lap 39.

Closing back in with lap traffic in play, Sheppard and Owens – who was right in the thick of things with both drivers all race long – caught Dillard as the five-to-go signal was given. While Dillard dealt with traffic on the bottom, Sheppard ripped around the top and was able to squeeze by both the lapper and Dillard on lap 46 to reassume control of the lead. From there, it was a mad dash to the finish with Dillard and Owens frantically pursuing the Rocket1 Racing No. 1. In the end, neither Dillard nor Owens could muster up one final challenge for Sheppard, who banked his 11th World of Outlaws win of the year.

“I think we were on a little different tire than Cade was and we were just able to hold our momentum up top which is what really allowed us to win that race,” Sheppard noted. “I don’t know that we had the best car. We were in the right place at the right time. I think a few more laps and he probably would’ve passed me. It was getting ready to get hairy. But hey, sometimes you’ve got to have luck on your side and it was on ours this time.” 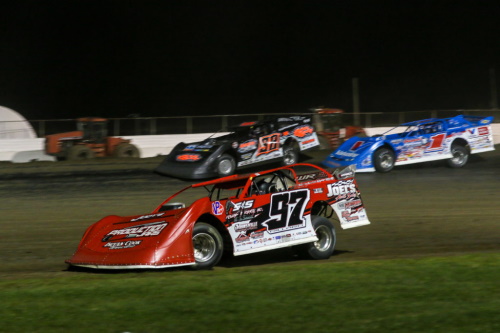 Coming home in second, Dillard only fell behind of Sheppard by .521 seconds at the checkered flag. It wasn’t the third career victory the Louisiana native hoped for, but his second-place bid did mark his 11th top five of the season and propelled him closer to Lanigan in the battle for third in the championship standings.

“I couldn’t run around the top like Brandon and Jimmy could, so I just tried to stay down in the mud and keep our softer tire going around the end of the race,” Dillard said on his move to the bottom. “I’ll say it once again, it’s really just an honor to be up here consistently with people like Brandon Sheppard and Jimmy Owens, they’re definitely the best in the business. We’ll keep working on this MB Customs ride and hopefully can outrun them eventually.”

Although he never led a lap, Jimmy Owens of Newport, Tenn. was a constant threat for the lead in Tuesday’s trip to Davenport. Hounding both Sheppard and Dillard, “The Newport Nightmare” trailed them both down the stretch and made a few moves into the second spot, but ultimately slipped to third for his second-straight podium finish.

“It was a great race,” Owens noted afterwards. Those guys got the jump on me and got out front and I struggled a bit early on the bottom and those guys were just better up there. Once I moved up I felt really good, but by then Cade and Brandon were both in front of me. You just had to hope one of them would mess up, but they’re two talented guys that aren’t gonna slip.” 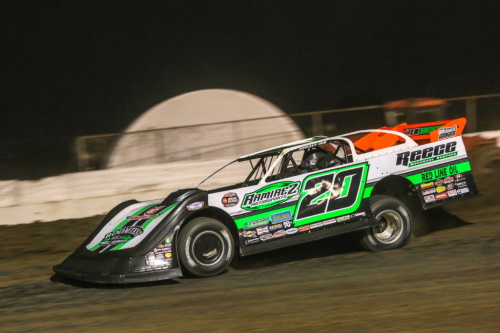 Owens nabbed his second-straight podium finish with the World of Outlaws leading into a big weekend at Kokomo. (Brendon Bauman Photos)

Behind Sheppard, Dillard and Owens was “The Iceman” Jimmy Mars of Menomonie, Wisc. with a fourth-place bid for the MB Customs No. 28M house car. Chris Simpson of Oxford, Iowa held the fort down for the local bunch as the highest-finishing Iowan in the fifth spot.

Jeremiah Hurst of Dubuque, Iowa ran all the way from 23rd-to-sixth to take Hard Charger honors in impressive fashion. “The Smooth Operator” Bobby Pierce finished in seventh aboard his family-owned No. 32 entry. Darrell Lanigan of Union, Ky. guided his newly-designed No. 29V Viper Motorsports ride to an eighth-place finish. Dennis Erb Jr. of Carpentersville, Ill. advanced from 16th-to-ninth in the No. 28 Rocket Chassis machine. Chase Junghans of Manhattan, Kans. picked up his 20th top ten effort of the 2020 season with a 10th-place drive in the No. 18 Rocket.

Up next for the World of Outlaws Morton Buildings Late Model Series is a two-day trip to Indiana’s Kokomo Speedway this Friday and Saturday, July 31 – August 1, for the inaugural Hoosier Dirt Shootout. A FALS Presentation, this $25,000-to-win, $1,500-to-start event features a format identical to the popular Prairie Dirt Classic. Advanced tickets are available for purchase HERE. 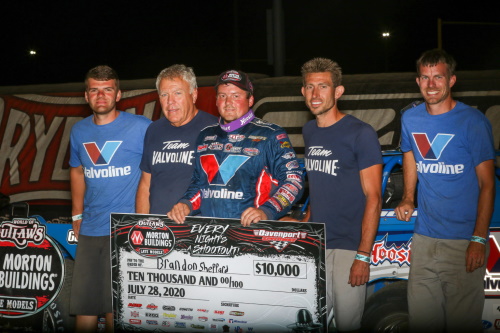