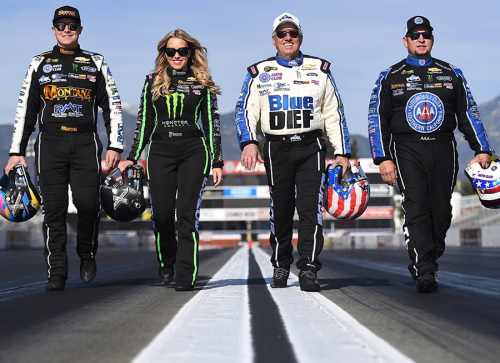 YORBA LINDA, Calif. (July 31, 2020) – After four months of postponement and ever-changing scenarios, NHRA went forward with a revised Mello Yello Drag Racing Series schedule that restarted with two-consecutive races at the storied Lucas Oil Raceway at Indianapolis in Indiana. Sixteen-time Funny Car world champion and NHRA legend John Force sidelined his four-car team for the restart of the Mello Yello Drag Racing Series season. The driver of the PEAK BlueDEF Chevrolet Camaro SS announced today that John Force Racing will remain parked for the 2020 season in order to come back at championship caliber.

“When I first got into racing, I always had a love for cars, I loved the comradery of the team, I loved the competition. As I evolved, I realized what it took to become a winner. It took money and that’s when I started chasing corporate America. I had no personal wealth, I had to find sponsors to get me the crew chiefs I needed to win,” said Force, owner and CEO of John Force Racing. “As the winning happened, I found a new love. The fans. The fans are what kept me motivated and made me never ever think anything would come to an end. Even in the hardest of times, I call them crossroads, I got through it with the help of the fans and my sponsors. I went from a one car team to a multi-car team, to having machine shops, chassis shops and paint shops and the technology to win.

“Suddenly, the virus hit, and it changed the world. Robert Hight, President of the company, and I got back from Gainesville and we started working on a plan, we had to reset John Force Racing. Everyone was having to adapt. We had to make cuts everywhere. We ran numbers over and over. In our contracts with sponsors we have guarantees. They get social media, certain number of races, certain number of race days, activation at races and other commitments. No matter how I looked at it I couldn’t deliver on those commitments. It just wasn’t fair to them,” continued Force. “The impact of not being able to deliver on these commitments makes sitting out the rest of the 2020 season the right thing to do. No matter how I looked at it, no matter how much I personally invested, I couldn’t make it.

“At that point, I made the decision to ‘live to fight another day.’ We can’t fight now, we can’t race right now, but with what I have, with the help of my sponsors and my own personal money, I can maintain. I have to protect my family, my employees, my teams and my sponsors. What I built was a team that could win. All I have to do is get to next year. It will look different, but I have all my department leads and my sponsors, Auto Club, Chevrolet, PEAK, Monster, Frank Tiegs owner of Flav-R-Pac and Montana Brand, Cornwell Tools, Parker Store, Baldwin Filters, they’re all supportive,” said Force.

“What I’m saying is that I’m going to prepare to come back next year stronger than ever. Watching all the people that went racing, NHRA, the track, Safety Safari, TV, the media, all the winners, all the teams, thank you for racing and keeping the sport alive. I am really heartbroken I’m not out there. If I had stayed and raced, I couldn’t come back. If I step back now, I can. I want to be with all of you again and I want to be competitive. We will continue to support all our sponsors, doing their promotions as planned and stay relevant on social media for the fans; we are going to continue to build race cars, as we always have, build engines, mount bodies, parts and do everything we can because we are open for business in Indy and California,” concluded Force.