On Friday night at Kokomo Speedway, it was no different; as both drivers scored convincing Showdown Feature wins and punched their tickets into tomorrow’s $25,000-to-win Hoosier Dirt Shootout.

In all, 18 drivers are locked-in to the 75-lap feature with six of those superstars set to participate in the Morton Buildings redraw with a chance at the pole position. Included in tomorrow’s redraw is Sheppard & Owens along with Shane Clanton, Ricky Thornton Jr., Cade Dillard, and Chase Junghans.

Come time for the 25-lap Showdown Features, the narrative quickly flipped from pole-sitters Clanton and Lanigan to the dominance of Owens and Sheppard. 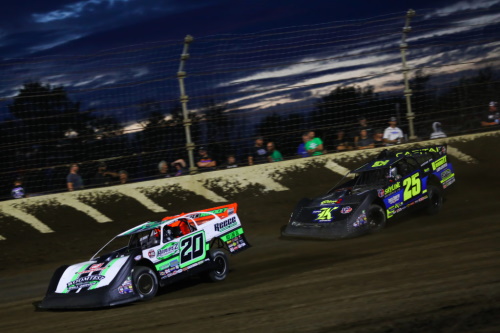 Darting straight to the cushion at the drop of the green flag, Owens pointed his Ramirez Motorsports No. 20 Rocket Chassis around the outside of Clanton’s Skyline Motorsports No. 25 and assumed control of a lead he would never relinquish in Showdown #1. Never seriously challenged, even after two stoppages, “The Newport Nightmare” took off for a .856-second victory at the checkered flag.

“The car was just really great again,” Owens noted in victory lane. “I think we had an issue right when we crossed the finish line because I saw something fly out. It’s great if we’re gonna tear something up to do it at the checkered flag. I’m happy to be locked-in to the redraw this mean we can watch the track tomorrow night and make the right changes we need to this Ramirez Motorsports ride. Hopefully we get a good redraw pill, but most importantly we’re in the show.”

Owens assured his spot in the Morton Buildings Redraw alongside fellow podium finishers Clanton and Louisiana’s Cade Dillard in the MB Customs No. 97. Taking transfers and earning a spot in Saturday’s Hoosier Dirt Shootout feature was also “The High Side Hustler” Jason Feger in fourth, “The Killer” Kyle Bronson in fifth, “The Smooth Operator” Bobby Pierce in sixth,”Black Sunshine” Scott Bloomquist in seventh, and the iconic Billy Moyer in eighth. 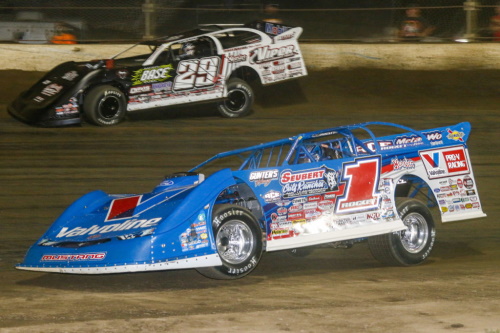 Sheppard (1) glides under Lanigan (29V) in the opening stages of his Showdown Feature win at Kokomo. (Tyler Carr Photo)

In the second Showdown, Lanigan paced the opening two circuits aboard his Viper Motorsports No. 29V Barry Wright Icon Race Car before Sheppard sneakily struck and stole the lead on the bottom. Rolling the low line in the Rocket1 Racing No. 1, B-Shepp meticulously worked the inside of the Kokomo 1/4-mile, and like Owens, checked out for a 1.675-second victory.

“I didn’t want to get up there and use my stuff up, I know I can get around a cushion pretty good,” Sheppard said on his decision avoiding the treacherous outside groove. “I got a great feel for this car down low, through the middle, and I had to move up a few times in traffic. There’s so much competition out here on the road with the World of Outlaws, plus the regional guys and Lucas Oil drivers come over to race with us. You don’t wanna start any farther back than you need to. I’m happy to be starting up front tomorrow.”

Tickets to Saturday’s finale at Kokomo will go on-sale at the track at 12:00pm ET. For those unable to make it, you can watch every lap LIVE on DIRTVision.