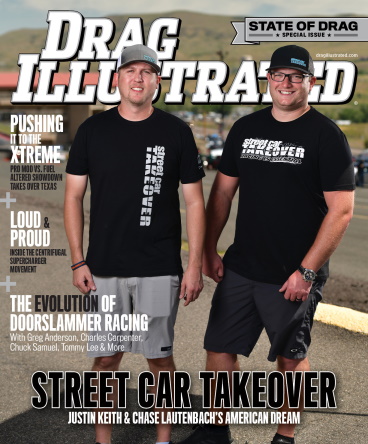 KIRKSVILLE, Mo. (August 1, 2020) – Following their passion has turned into a lifelong dream for Justin Keith and Chase Lautenbach, as their Street Car Takeover continues to flourish, taking another step forward in 2020 despite some trying times in the world.

That success, as well as SCT managing to hold massive, successful events in the midst of a public health crisis, landed the duo on the cover of Drag Illustrated’s annual “State of Drag” issue. When they launched Street Car Takeover in 2013, they never imagined enjoying the current success — or appearing on the cover of a major motorsports magazine.

“It’s a huge honor to be chosen for the cover of Drag Illustrated, especially one outlining the state of drag racing,” Lautenbach said. “Bringing two guys from the Midwest together with just an idea to go race with our friends has turned into this wild ride. It’s been such a humbling experience.”

Drag Illustrated issue No. 158 takes a look at the state of drag racing on a number of fronts, and Keith’s and Lautenbach’s Street Car Takeover is among that. After powering through a challenging start-up phases, they now host huge gatherings at some of the country’s biggest tracks, drawing incredible participation at places like Indy, Denver and Dallas in 2020.

“What Justin, Chase and the Street Car Takeover events are doing for drag racing cannot possibly be overstated. Organized drag racing, in a lot of ways, can be extremely intimidating. The drag strip isn’t an easy place to be the newbie,” Drag Illustrated Founder and Editorial Director Wes Buck said. “What Street Car Takeover has done, in my eyes, is create an environment free of that pressure and intimidation. It’s geared almost entirely toward racers and enthusiasts who are early in their drag racing hobby, and it’s welcoming to makes, models and people from all walks of the racing life.

“It’s my hope that the young man or woman heading out to the local drag strip to participate in SCT’s ‘King of the Bakery’ roll race will — someday — end up competing in PDRA Top Dragster or NHRA Super Stock or simply buying a dedicated bracket car to race locally. I’m truly thankful for Justin, Chase and their team for the service they are providing the sport of drag racing.”

It’s turned into a dream job for Keith and Lautenbach, who have persevered amidst the COVID-19 pandemic. In fact, their brand may be stronger than ever for pushing through during the pandemic, keeping them in the spotlight as hundreds of racers have flocked to each race this year.

“Man, we couldn’t believe it that we appeared on the cover and we can’t thank Drag Illustrated enough,” Keith said. “It’s such an awesome feeling being on the front cover of the best drag racing magazine out there. We love this sport and we want to continue to help grow it.”

SCT’s remarkable success was one of many topics during the “State of Drag” issue, which also features a story on the evolution of doorslammer racing, talking to standouts Greg Anderson, Charles Carpenter, Doug Winters, Mark Woodruff, and crew chiefs Tommy Lee and Chuck Samuel about the incredible advances in all the doorslammer categories.

The DI team also looks at the rise of the centrifugal supercharger, the standout run of success at Xtreme Raceway Park in Texas and much, much more in an issue that took on special importance in 2020.

“The State of Drag Issue has never been more important. There’s a lot of uncertainty in our sport and in the world in general, and we felt it was important to let people know that there are still big things happening in drag racing,” Drag Illustrated Editor-In-Chief Nate Van Wagnen said. “Promoters are continuing to sell out events, racers are still racing and companies are still doing business and innovating. In a time when so many headlines include ‘cancelled’ or ‘postponed,’ it’s nice to read some good news.”

Readers can view the full issue for free at digital.dragillustrated.com.