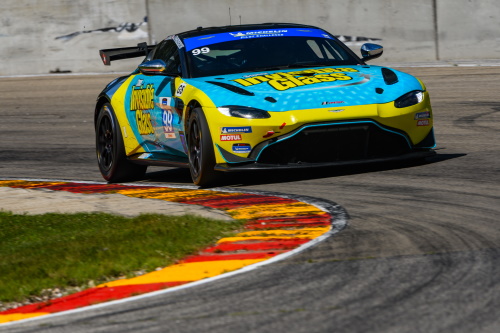 With outstanding weather, passionate and numerous race fans, and an incredible track, a return to Wisconsin’s home of speed always creates high hopes. But on Saturday, the team’s aspirations were quickly packed away after an incident early on forced the No. 99 Invisible Glass/Stoner Car Care Aston Martin Vantage GT4 to retire early.

The team developed a rhythm with only two weeks between last month’s Sebring event and this weekend’s race – after a six month postponement between Daytona in January and the Sebring event due to the global COVID-19 crisis.

The team was heartened by the Aston Martin’s performance at Sebring, where it showed increasing pace and performance throughout the weekend. Drivers Rob Ecklin Jr. (Lancaster, Pa.) and Ramin Abdolvahabi (Palm Beach Gardens, Fla.) traded in their customary Stoner Car Care livery and took on “America’s National Park of Speed” behind the wheel of the iconic No. 99 Invisible Glass/Stoner Car Care Aston Martin Vantage GT4. 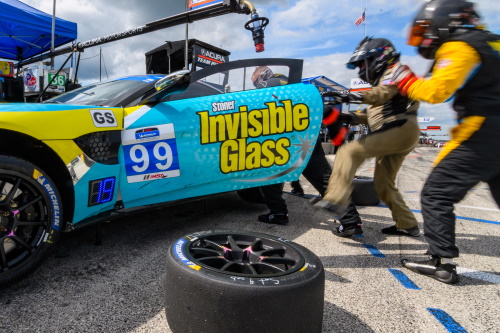 After the opening sessions generated a series of mechanical gremlins that limited the team’s practice laps, the crew worked diligently through their checklists to identify the Aston Martin’s maladies.

On just the second lap of the scheduled two-hour race, he was was hit from behind, damaging the car’s exhaust system beyond repair and placed the Aston Martin 19th in the final race standings. The frustration was evident for Ecklin, who knows that the top 10 result the team seeks just requires a trouble-free weekend.

“Ramin got a nice race start and was just settling in,” said Ecklin. “He was on his normal line going through Canada corner but the Audi behind him was passing another car, got in a little too hot and hit the Aston Martin in the right rear. The team did a great job to fix the rear of the car, but the exhaust pipe was bent closed so our boost pressure was affected. It also hit one of the radiators and did some further damage, so we had to retire. 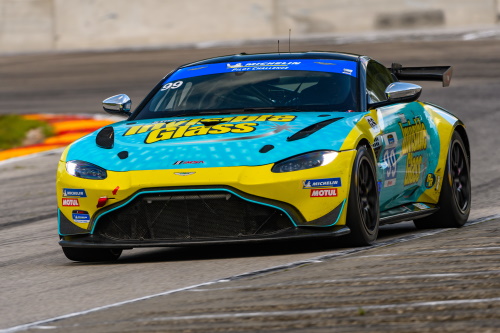 “We made some changes to the car after qualifying that I was really anxious to try, to see how the car handled,” said Ecklin Jr. “We struggled a bit this weekend and we think we got most of it corrected going into the race, and we were quite anxious to see how the car ran. But it didn’t work out that way.”

“But the car is fast, and you can see that in the other Aston Martin (the No. 60 Aston Martin qualified on pole and finished second). They put down some really good times, so we know the speed is there. We just need a complete weekend to get back into the groove, to go through practice, qualifying and racing with good lap times. The last two races were a bit disjointed for us as we’ve worked through these issues, but we know we’re close. The team has done a great job behind the scenes, so we’ll take what we learned here and get after it again.”

Next up for the Stoner Car Care Racing team will be the Michelin GT Challenge at VIR August 21 to 23. The race will be broadcast live in the U.S. on NBC Sports Gold’s TrackPass, while international viewers can watch via IMSA.tv. IMSA Radio will also be available at IMSA.com.