Elkhart Lake, Wisc. (August 2, 2020) – Making her IMSA debut at Road America, Taylor Hagler had high hopes heading into the race weekend. Despite suffering a mechanical issue during the two-hour race, Hagler and her L.A. Honda World teammate, Ryan Eversley took a top-ten finish at the fast Wisconsin circuit on Saturday.

Starting the day with qualifying, Hagler put the No. 77 Honda Civic Type R TCR on the sixth row for the start of the race as she returned to race action. 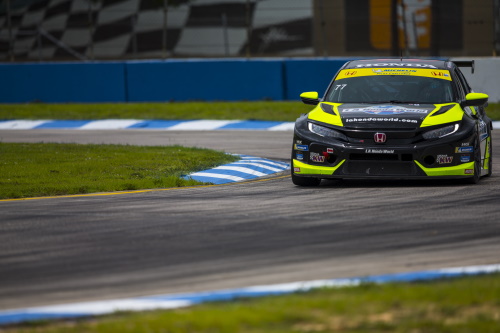 With a large 33-car field taking the green flag, the Honda development driver positioned herself to make the most of the start, maneuvering through a hectic opening segment to establish a race pace and work her way forward.

Unfortunately that progress was halted on lap 14, as the No. 77 Honda suffered a wiring harness issue causing the car to lose boost. Hagler was forced to come into pit lane for the team to diagnose and mend the issue. Diligent work by the crew allowed Hagler to return to competition. Despite being three laps down, Hagler was determined to maintain her focus and look ahead to collect points towards the championship.

Returning to the course after her second stop, Hagler was dished a second helping of bad luck when the left front hood pin broke on the No. 77 machine, causing it to lift up and damage the front end. The damage was too severe to continue, forcing an early retirement on Lap 20 for Hagler – ending the day in 10th. 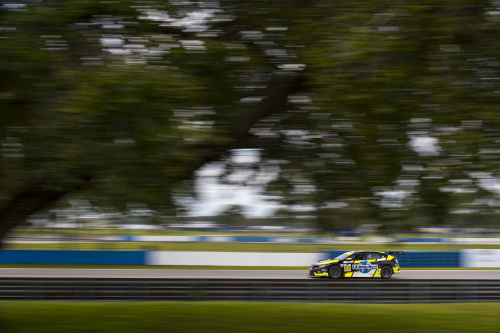 “It is always nice to come to Road America because it’s so scenic and fast,” said Hagler. “The first ten laps were really good and I settled into a rhythm and was racing with the second pack in TCR. My main focus was to take care of the equipment and try to work my way up into the top 10 before handing the car over to Ryan (Eversley). Unfortunately, we had to pit early because of a wiring issue and lost some laps finding and fixing the issue. We had a hood pin break after we got back on track and that ended our day. I’m so happy to be back at the track and I’m looking forward to VIR in three weeks.”

Hagler will return to the No. 77 L.A. Honda World Honda Civic Type R TCR at VIRginia International Raceway August 21-23rd for the Virginia Is for Racing Lovers Grand Prix.