Elkhart Lake, Wisc. (August 3, 2020) – It was a wet and wild race to the finish at Road America for the IMSA SportsCar Weekend on Sunday. Meyer Shank Racing drivers Matt McMurry and Mario Farnbacher had an outstanding run from dry to wet conditions to place the No. 86 Acura NSX GT3 second on Sunday.

Starting from the fourth row next to his sister car, McMurry took the green flag in the No. 86 Acura NSX GT3. The reigning Road America LMP2 race winner made his first official Road America race start onboard a GT car. The strength of the Honda-powered platform gave McMurry the foundation for a strong first stint.

With the GTD field spreading out equally through the first round of pit stops, McMurry handed the car off to Farnbacher on Lap 20. A flawless pit stop by the Meyer Shank Racing crew gave the No. 86 Acura a fresh set of Michelin Tires and full load of fuel while also leap frogging the team’s sister car as well as a second class car in pit lane. 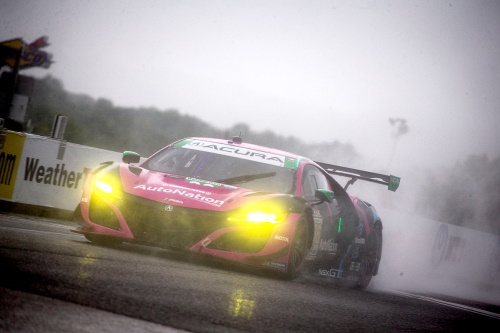 As one of the first few cars to utilize the GTD pit window, Farnbacher tried to capitalize on several cars returning on track with cold tires and was able to make up two positions to move into sixth once settled into race pace.

With rain threatening the race in the distance, the skies opened up with just 45-minutes to go. Chaos ensued on track with the rear half of the 4.048-mile circuit completely dry while the front half of the track was engulfed in heavy rain and hail.

A last minute call made by Mike Shank to bring Farnbacher into pit lane to swap his tires for a set of Michelin rains proved to be a critical call from pit lane.

The clock was put on hold at the two-hour mark while the field was red flagged for lightning and brought into pit lane.

Upon the restart there was just eight minutes to go and Farnbacher was ready to optimize the strong performance of the Acura NSX GT3 in wet conditions. Within the first lap after the restart, Farnbacher went from fifth to second and rapidly closed in on the lead car. 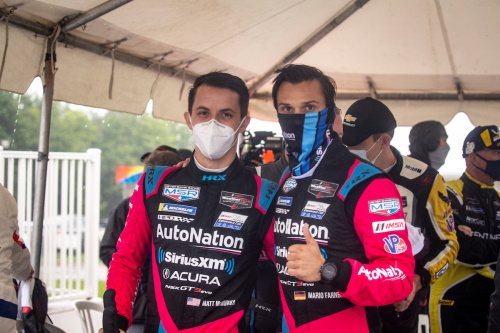 Farnbacher made a head turning pass around the outside of a wet Canada corner to take over the lead with just one lap to go. Farnbacher created a large gap and was on the fast track to victory circle, but standing water in “the kink” caught him and several other competitors off guard, costing him one position.

The second place finish was a strong follow up to the team’s run to third place at Daytona International Speedway one month ago and has solidified Meyer Shank Racing fourth in the provisional IMSA GTD championship standings.

“Once everything got sorted out after the start, it was just me and Misha (Goikhberg) right behind each other,” said McMurry of his opening stint. “We couldn’t really catch up to the cars in front. I handed the car off to Mario (Farnbacher) and apparently it handles really well in the wet! He went from fifth to first in about half a lap, that was super impressive. He did an awesome job but he got unlucky at the end, hitting a big puddle in the Kink that it sounds as though everyone hit. We got out of it pretty easy: a lot of other cars had it worse. We’re still happy with the finish, we’ll move up in the points.” 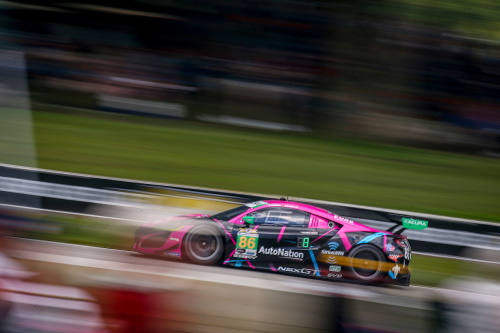 “Matt had a good stint, keeping the car clean,” said Farnbacher. “We’d gained a bit of understeer since practice but we were able to manage it during the race. My first stint was mega and the team had a great pit stop which allowed us to overtake our sister car in the pits. I was able to push right away but the car has some braking issues so I just tried to survive. We came in early for rain tires and I think that was the key point, so thanks to Mike (Shank) and the guys for putting me into the right strategy – that was the reason we finished on the podium. We should have won it, but that’s racing sometimes. These are good points, on to the next one.”

The next round of IMSA action will be at VIRginia International Raceway on August 21-23.