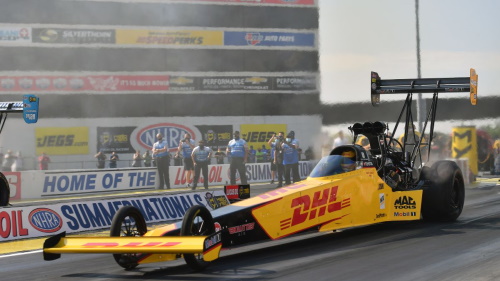 Heading into the fifth race of the NHRA Mello Yello Drag Racing season Shawn Langdon and his DHL/Kalitta Air Top Fuel team can feel some momentum building. For the third consecutive race the team will be racing in Indianapolis and the familiarity of the facility does give Langdon some motivation as well as stability. The NHRA Nationals will kick off with one day of qualifying on Saturday followed by eliminations on Sunday format which will air live on FOX.

“I know NHRA is doing everything they can to keep the season going,” said Langdon. “We should be in Denver this weekend and we are hoping to get there later this season. Everyone is working to keep the fans and teams safe so we just race when and where they tell us to race. It is great to be back at in the track in Indy and it sort of feels like we are racing for the track championship coming back for the third week but there is a Top Fuel championship on the line instead.”

The 2013 NHRA Top Fuel world champion is currently No. 7 in the Mello Yello Top Fuel point standings. The battle in the middle of the standings is tight with only 54 points (less than three rounds of racing) separating Langdon from the No. 3 spot. His teammate Doug Kalitta continues to have a commanding lead but Langdon knows he wants to get up closer to the Mac Tools dragster.

“Doug has been on a tear this season,” said Langdon. “We are both running great dragsters and you have to look at the support we all get from Mobil1, Toyota Racing Development and NGK Spark Plugs on the performance side. Kalitta Motorsports has done a great job of getting all three teams on the same page and really working well together. I have enjoyed the move back to dragster and I think our performance is going to start stepping up this weekend.”

The team will be continuing to highlight a number of sponsors for added exposure heading into their third race on FOX. Look for enhanced branding for long-time sponsor SealMaster on the front side of the DHL dragster. Additionally, there will be TRD branding below Toyota logo on cockpit side with Revchem Composites branding on side window. The rear wing will be adorned with Toyota and Mobil1 branding.

The prior two seasons saw Langdon wheeling a Nitro Funny Car, racing to two victories in 2019 and a Top Ten finish. His career has been defined by the dragster whether it was in the early days coming up through the junior dragster ranks to sportsman classes or his first years in Top Fuel. The second generation racer has always enjoyed the acceleration and power that comes from hitting the throttle on an 11,000 horsepower Top Fuel dragster.

“A lot of people ask about the switch to Funny Car and now back to Top Fuel,” said Langdon. “The biggest change going to Funny Car was the handling of the race car going down the track. That took some time to get used to and get that under control. Coming back to Top Fuel I have had to get used to the immediate acceleration. There is nothing like the launch of a Top Fuel dragster. I am back to being very comfortable and I think you’ll see the results of the rest of the season.”

The race coming up in Indianapolis could also be Langdon’s last chance to get some laps on the track that will host the biggest drag race in the country the U.S. Nationals Labor Day weekend. After this weekend there is a short break and the month wraps up with the NHRA Southern Nationals in Commerce, Georgia, August 29-30. Getting a second U.S. Nationals win if definitely on Langdon’s to-do list this season.

“This track in Indy is special. These races we are running now don’t compare to the U.S. Nationals. That race has its own vibe. No matter what is going on, winning the U.S. Nationals is a big deal. No one know how this season will play out so we want to get as many round wins as possible and win as many races as possible. We want have some success this weekend and move on from there,” added Langdon.

Quotable: Shawn Langdon on getting back to action: “I am ready to get back to the track. It is cool that I don’t have to go to an airport but the travel is also something that helps get you into a race mindset. Once you get to the track you focus on the task at hand no matter where you are racing. It will be good to see my DHL guys and get back behind the wheel.” 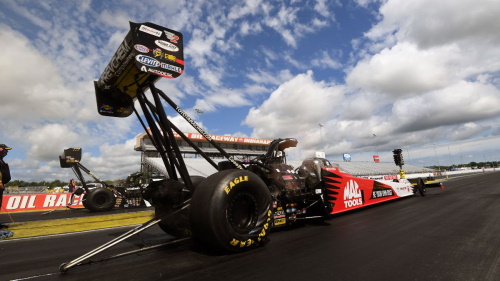 For Top Fuel point leader Doug Kalitta this weekend’s race could not get here fast enough. Since the start of the 2020 NHRA Mello Yello Drag Racing season Kalitta has had the best race car, the Mac Tools Top Fuel dragster, in any of the categories across the series. He has raced to three final rounds including a season opening win at the Winternationals. Two weeks ago he stumbled dropping a quarterfinal race to Justin Ashley snapping his final round streak at four races total extending all the way back to the Auto Club Finals in November of 2019.

“My crew chief Rob Flynn and the boys have this Mac Tools dragster running awesome,” said Kalitta. “We went blue last week with new sponsor Osborn and we didn’t get as far into the race as we would have liked. Those guys were great to have at the track and I know we connected them with some of our other partners. You love having new sponsors come to the races and we got a lot of quality time with them.”

For Kalitta this season is one more in a long list of successful endeavors. Earlier this year he picked up his 700th round win and he is two wins away from 50 career Top Fuel victories. As the point leader the veteran driver knows he has a bulls-eye on his back every time he comes to the starting line.

“I love the competition. I have to thank Connie for giving me this opportunity but there is nothing better than getting a win light or running low E.T.,” said Kalitta. “I have been with Mac Tools a long time as well as many other sponsors like Toyota and Mobil1. We have a great team and I am looking forward to getting back to Indy and going more rounds this weekend. We’ll be back in the red Mac Tools dragster with some new TRD, Revchem Composite and Mobil1 logos on this race car.”

Since the season opening win in California Kalitta has held the Top Fuel point lead. Heading into the NHRA Nationals in Indianapolis this weekend he holds a 95 point lead over second place. The dominance and consistency of the Mac Tools Top Fuel dragster has provided Kalitta the confidence to stay at the top of his game.

“We had a second round loss two weeks ago and those are tough. We know every race we have a car that can win or at least get to the finals. We are getting good runs in qualifying and then making them count on Sunday. I have said it before Rob Flynn is doing a great job. This race car performs as well or better than any car I have raced. We finished last year strong and picked right up this year,” added Kalitta.

Quotable: Doug Kalitta on getting back to Indy: “This will be our third race in a row in Indy and we have the U.S. Nationals on Labor Day weekend. I am glad NHRA is doing everything they can to keep us racing. This is a great track with a lot of history. I am glad to see more fans at the races and we just want everyone to have a good time and be safe.” 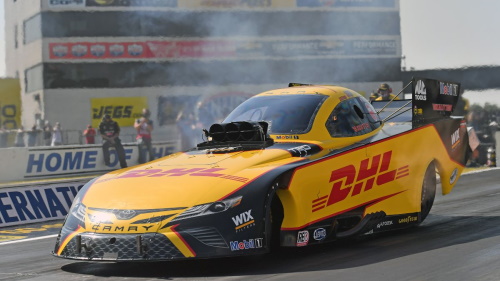 For J.R. Todd, the two-time U.S. Nationals winner, getting back to the track in Indianapolis is always a special event. It is a track where he raced junior dragsters growing up and then captured the biggest single day win in drag racing not just once but twice. The second win paved the way for his first NHRA Mello Yello Funny Car world championship in 2018. This weekend Todd and his DHL Toyota Camry Funny Car team will be rolling on the property for the third installment off the NHRA Nationals in Indianapolis as the pandemic affected NHRA season marches on.

“I love racing at Indy,” said Todd. “Lots of history here for me personally and for the sport of NHRA. This will be our third shot at getting another win and I like our chances. We are making good runs on Saturday and we just need to string a few more round wins together on Sunday.”

For Todd the chance to go rounds on Sunday could lead to another move up the Mello Yello Funny Car point standings. He is tied for sixth place and is just 63 points out of fourth. A strong race this weekend could help the former Funny Car champ reel in the top three Funny Cars.

“This season is really interesting since there are a lot if unknowns,” said Todd. “I am hopeful we will get a lot more races in but we just don’t know. I know our team and the NHRA are doing everything we can to be ready to race. I live close to the track so I don’t mind racing in Indy but I know there are fans in other parts of the country that would love to see this DHL Toyota Camry in person.”

While the teams are racing again in Indy the interest in the sport continues to grow. The Fox broadcast numbers have been encouraging showing a jump of over 300,000 viewers from the first NHRA Nationals held in Indy to the second national event that was unfortunately shortened by rain. The coverage and exposure on Fox is one of many aspects of getting back to racing that encourages Todd.

“We want to be successful on the track but also on TV. Seeing the Fox numbers going up is great for our team and our sponsors like DHL, Toyota, Wix Filters, Mobil1 and NGK Spark Plugs. You want to go rounds on Sunday so you can get those top end interviews to thank all the people that help you out. This DHL team has been working really hard to get better every race. I think we will see even better results as the season goes on starting this weekend,” added Todd.

Quotable: J.R. Todd on getting back to Indy: “This DHL team just wants to race. We’ll race in Indy or Atlanta or Dallas. We just want to keep the season going. I know a lot of people are working really hard to make this happen and I want to thank them for their efforts. Everyone is having to make adjustments and we just want to keep making runs and turning on win lights.”