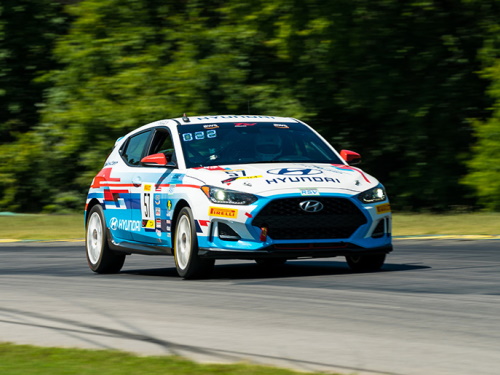 SONOMA, Calif. (August 5, 2020) – After a triple podium performance at the most recent TC America round at the Virginia International Raceway (VIR), Tyler Gonzalez heads west to California. Set to take on the Sonoma Raceway, Gonzalez and his Copeland Motorsports team are riding a wave of momentum after a triple podium performance, including a victory on Sunday, as he sets his sights on the overall championship points lead in TCA.

“The guys worked their butts off at VIR to do an engine change overnight, and I was relieved that everything went well. I was able to reward them with three podiums and a win,” explained Tyler Gonzalez. “Now with a few weeks off, Copeland Motorsports has had some extra time to massage and go through the, car and I am feeling confident heading out West.”

Sitting second in the TCA Driver Championship, Tyler is nine markers back from the championship leader but has scored two race wins on the season, more than any other TCA competitor. With the difference being at the second round at the Circuit of the Americas (COTA) back in March, Gonzalez outscored, or matched point totals compared to his rivals at VIR.

On track August 6-9, Tyler Gonzalez will hit the track on Thursday for an unofficial Promoters Test Day as he looks to get his Hyundai Veloster up to speed. Friday will be the home of qualifying and the first wheel-to-wheel action while race two and three of the weekend will take place on Saturday and Sunday.

For more information and/or partnership opportunities on Tyler Gonzalez, please contact Alberto Gonzalez at 407.466.9083 or via e-mail to superiorcoatingsystems@yahoo.com.