NEW RICHMOND, WISC. (August 7, 2020) – Brandon Overton said he’s having fun right now, probably the most fun he’s ever had in his career; which is something that should have the rest of the dirt late model racing world worried.

Overlooked far too often in 2020, “Big Sexy” has been the metaphorical third wheel to the the flashy national headlines sparked by World of Outlaws’ champion Brandon Sheppard and Lucas Oil points leader Jimmy Owens. Building his own remarkable campaign in the shadows, Overton has quietly pieced together a pristine portfolio this season which now includes a dominating victory in the USA Nationals preliminary. 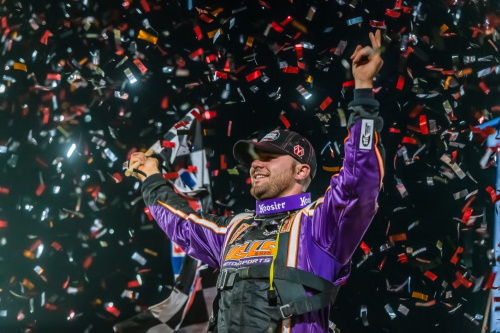 Leading from flag-to-flag, the Evans, Ga. 29-year old controlled all 30 laps of Thursday’s Morton Buildings feature at Cedar Lake Speedway for his eighth career World of Outlaws Late Model Series victory. Overton officially booked his 16th triumph of the year aboard the Wells Motorsports No. 76 Longhorn Chassis with the wire-to-wire win. 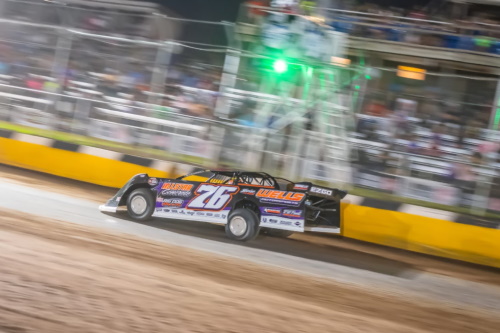 “Hell, I like it that way,” Overton said on Sheppard & Owens owning the spotlight. “Those guys are seriously good though, we’re just happy to be here and racing against them. To beat those guys and really this whole field, it’s pretty cool.”

Coming over a stout 46-car field, Overton’s opener wasn’t just a win, but a sweep of the preliminary program. He was fastest in Group A Qualifying at 13.666 seconds, won his Team Drydene Heat Race from the pole, pulled the 1 in the Morton Buildings redraw, and led all 30 laps of the $6,000-to-win feature.

“I’m having fun right now, and when I’m having fun I always run a whole lot better,” Overton said on his newfound confidence. “Hats off to David Wells, Eric, everyone for believing in me. This is a dream come true to drive for these guys. They’re giving us all of the pieces to the puzzle and I just have to put it together. It’s cool to get back out on the road and race with these guys.”

With Overton large and in charge (winning by 1.908-seconds), the action behind him heated up as Jimmy Owens, Tyler Erb, Billy Moyer and Mike Marlar jockeyed for the top five slots all race long. “The O-Show” and “Terbo” were the main thrill-providers going at each other door-to-door during a handful of restarts with the runner-up spot on the line. Erb squeaked his BEST Performance Motorsports No. 1T ahead of Owens’ Ramirez Motorsports ride for a few laps past halfway, but couldn’t make it stick as the Newport, Tenn. native rallied to take the spot back and ultimately secure a second-place bid. 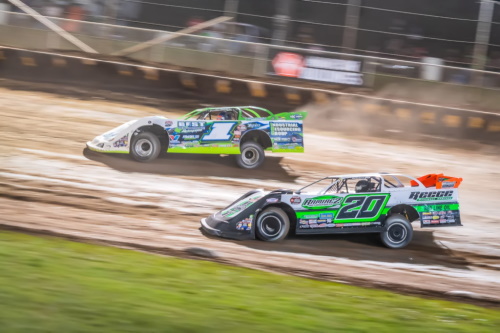 For Owens, his second-place result in the Rocket Chassis No. 20 keeps his streak alive with four-straight World of Outlaws podium finishes over the last month. The 2014 $50,000 winner at Cedar Lake, Owens is one of seven former USA Nationals champions chasing a second wooden eagle trophy this weekend.

“This track was excellent tonight – you could run high, you could run low, you didn’t really know where to be because it had so many great spots,” Owens stated on the track conditions. “The car wasn’t near as good as we wanted it to be, but I’m glad to bring it home with a second-place finish. We’ll try to get better tomorrow and go for the big win on Saturday.”

Making his fourth appearance of 2020 with the World of Outlaws Late Models, Tyler Erb of New Waverly, Tex. snagged his first podium finish and first top five result of the year with the Outlaws on Thursday night. Returning to Cedar Lake with a chip on his shoulder, “Terbo” still remember last year’s USA Nationals when he put the BEST Performance No. 1T on the pole position of the 100-lapper, but a lap one error cost him a shot at the $50,000. A memory that motivates him this weekend.”

“Jimmy and I had a really great race there,” Erb thought afterwards. “Brandon definitely had the best car tonight though. It just means we have to go to work and make this thing better tomorrow.” 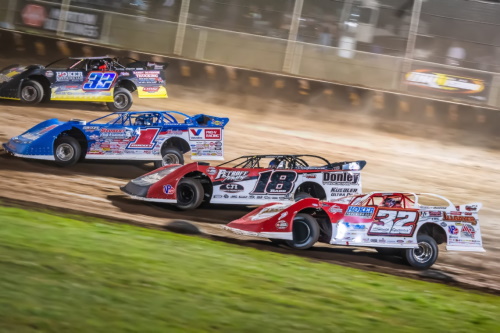 The action was hot & heavy all throughout the field in Thursday’s opener at Cedar Lake. (Jacy Norgaard Photo)

Closing out the top five in Thursday’s 30-lapper was “Mr. Smooth” Billy Moyer in fourth, who continues his absurd run of Cedar Lake Speedway success which dates back to his five USA Nationals titles in the 80’s and 90’s; and then Mike Marlar, the 2018 World of Outlaws champion, in the fifth spot aboard his Desk Equipment No. 157 Rocket Chassis.

Current World of Outlaws point leader Brandon Sheppard missed the top five for a second-straight race by finishing in ninth aboard the Rocket1 Racing house car. Also for the second straight race, Scott Bloomquist took home hard charger honors with a +14 performance in taking his Team Drydene No. 0 from 24th-to-10th in the 30-lap feature.

The 33rd annual USA Nationals resumes tomorrow on Friday, August 7 with the second of three nights at Cedar Lake Speedway in New Richmond, Wisconsin. The $50,000-to-win program officially gets underway with two rounds of heat races utilizing passing points to line up the top eight drivers in the Morton Buildings Dash, which will decide the starting order of Saturday’s 100-lap feature. Hot Laps are slated to hit the track at 6:30pm CT on Friday night. Tickets are available for purchase at the gates. DIRTVision will have tonight’s live coverage on pay-per-view for $24.99. 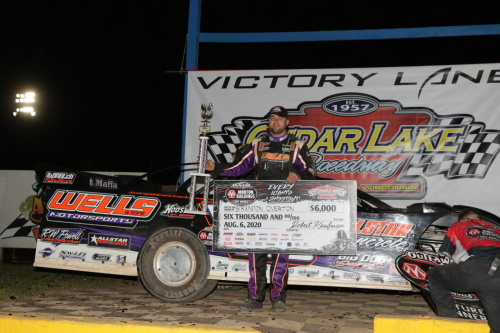