SONOMA, Calif. (August 7, 2020) – There continues to be no slowing down Michael Cooper in the Pirelli GT4 Sprint Championship. The Blackdog Speed Shop pilot won his third consecutive race in the series and fourth of the season in the No. 10 Blackdog McLaren 570S GT4 on Friday at Sonoma Raceway.

Cooper, the GT4 Championship leader, won for second straight year at Sonoma and sixth time in his career across three categories. It also was the sixth win for Blackdog Speed Shop at the northern California track. The No. 10 Blackdog McLaren also set the fastest lap Friday afternoon, meaning that Cooper will start on pole position for Saturday morning’s second race of the weekend. 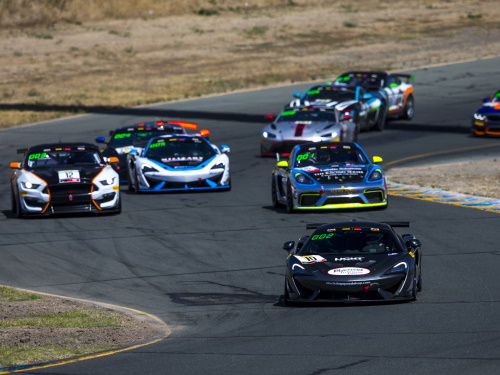 The only thing that threatened Cooper’s momentum was a false start when the 50-minute race originally went green. Cooper has gotten the No. 10 McLaren around the outside of the pole-sitter at Turn One but had to fall back to two-by-two for the second attempt at a restart.

It took three corners for Cooper to officially take the lead after the restart. He ran behind Spencer Pumpelly’s Porsche out of the but used a nifty move to go from outside of the Porsche to the inside of the next corner and nudged ahead for good. He led by 2.5 seconds at the halfway point, led by more than four seconds at one point and took the checkered flag by 2.613 seconds.

Blackdog Speed Shop returns to the track at 9:25 a.m. PT Saturday and with Sunday’s weekend wrap-up set for 3:15 p.m. PT Sunday. All races will stream live on gt4-america.com.

MICHAEL COOPER, NO. 10 BLACKDOG SPEED SHOP McLAREN 570S GT4: “Another great job by everyone at Blackdog Speed Shop and McLaren. Everything is working really well for us. It was a little unfortunate that we had to do the start twice. Spencer saw my hand the first time and knew what he needed to do on the restart. He ran up to Turn One a little bit quicker and got ahead of me but luckily I was able to cross over and make it stick. Our McLaren is good on cold tires. From there it was really tough… sliding around all the time. But I was able to pick up a tenth or so each lap on those guys, and those added up at the end.
“I feel like I’ve owned this place since I started coming here in 2012. I’ve won in almost everything I’ve raced here, and I know the track like the back of my hand. I can be beaten any day, but it’s pretty damn hard to beat me at Sonoma.”