SONOMA, Calif. (August 8, 2020) – The roll of the proverbial dice went in favor of Michael Cooper and Blackdog Speed Shop again Saturday as they combined for another Pirelli GT4 America Sprint victory at Sonoma Raceway.

Cooper, in the No. 10 Blackdog Speed Shop, led from pole position to win for the second time in as many days, for the fourth straight series event and seventh time in his career at Sonoma.

He and Blackdog Speed Shop – also now a seven-time winner at the circuit – grew their Driver and Team championship lead unofficially to 26 points ahead of Sunday’s weekend finale. 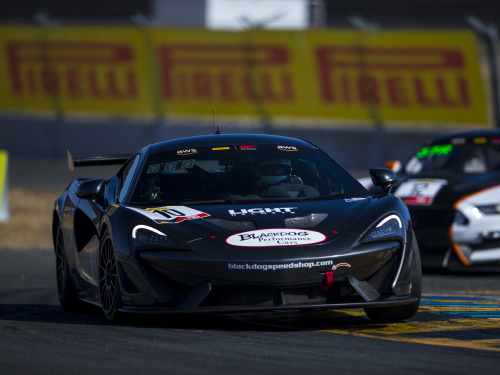 Blackdog Speed Shop also won for the 34th time in SRO GT4/World Challenge GTS competition. The last two at Sonoma have come with Blackdog teammate Tony Gaples at the track as he continues to target a return to racing at Road America following two rounds of eye surgery.

Cooper’s margin of victory Saturday was 1.070 seconds, a far cry from what appeared to be smooth sailing in Friday’s victory. He rarely led by more than a second during the 50-minute sprint, and the top three finishers were separated by just 1.766 seconds.

The No. 10 McLaren opted to begin the race on new Pirelli tires, and the grip paid off in the opening laps for Cooper. He was able to get out in front in a very close and competitive start but had to work hard the entirety of the race to stay there.

Cooper did enough to set the fastest race lap early and claim pole position for Sunday’s 3:15 p.m. PT race, which will stream live on gt4-america.com.

MICHAEL COOPER, NO. 10 BLACKDOG SPEED SHOP McLAREN 570S GT4: “That was really, really tough. I think in reality we had the third-fastest car today. We were fortunate from yesterday to start from pole and be out front to give those guys behind our dirty air. But I was at 100 percent the entire race. The gap would fluctuate a couple of tenths either way over the course of a bunch of laps. It was tight for sure.
“It’s great to have Tony at the track. It’s a big morale boost for everyone on the team. He’s really pumped up with these wins the last two days. Big thanks to him, Blackdog Speed Shop and McLaren for everything so far this weekend. Let’s go for one more tomorrow.”