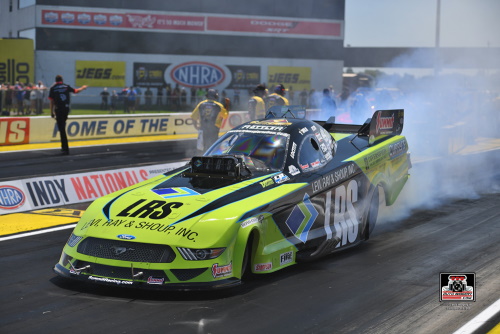 Brownsburg, Ind. (August 8, 2020) – Tim Wilkerson and the Levi, Ray & Shoup Ford Mustang didn’t quite find the sweet spot on Saturday at Lucas Oil Raceway, but the seasoned veteran plans to take the lessons he learned on his two qualifying passes and turn them into results on Sunday.

Wilkerson drove the LRS Ford to a 4.735-second pass at 170.99 mph in the first session that was more of a test than anything to get the feel for how willing his Funny Car would be to go fast on the hot racetrack.

“I tried to push it, and it said, ‘nah,’ ” said Wilkerson, who was No. 12 at the end of the first session. “I haven’t smoked the tires in the middle of the racetrack for so long, and I thought, well, I’m going to try to see if I can make the thing go faster. It wouldn’t let me.”

In the second round of qualifying, he came back up to the starting line with a car that he wasn’t trying to push to go fast – he just wanted a good run that would move him up in the qualifying order.

“I just got out of the groove, I think,” he said of the pass that netted tire smoke and a 4.515 at 189.95. “I really thought it would go down the track that time, but I was looking at the video, and that right lane drags you in real bad. I didn’t do a good job of dragging it back. It kind of washed out when it left, and I drove it right to where it spun the tires. I’m a little unhappy about that, but we’ll have something for them tomorrow.

“We need to be faster earlier and slower in the middle,” he concluded. “I might have forgotten how to do that, but I have something up my sleeve.”

Wilk qualified in the No. 14 position and will race Ron Capps in round one of eliminations.

Eliminations for the NHRA Indy Nationals will begin at 10:00 a.m. ET on Sunday, August 9, 2020, at Lucas Oil Raceway at Indianapolis.