ELKHART LAKE, WI (August 8, 2020) – Mike Skeen emerged as the winner following a dramatic TA2® Powered by AEM race Saturday afternoon at Road America. The American racer claimed his third victory of the 2020 season following a multi-car incident in the high-speed kink that red-flagged the event with 16 minutes still on the clock. With at least 20 minutes of cleanup required, the race activity was halted. 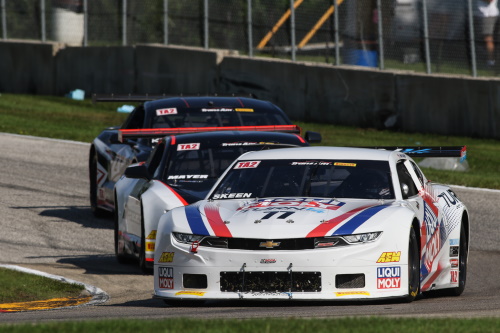 Despite having lost the position on the unscored final lap, Skeen led all 13 scored laps in the No. 77 Liqui Moly Chevrolet Camaro, and extended his lead in the season championship after four races. Sam Mayer finished second, with Rafa Matos netting the final podium position in a race that included multiple incidents at the high-speed Wisconsin fan favorite track.

“We had good battles early on, and the Stevens-Miller Racing Liqui Moly Chevrolet Camaro was just great, said Skeen. ”We had to fend off the lead with challenges a lot with restarts, more than we want for sure. When we had longer runs, the car was running away from them. It’s a shame that it’s all torn up now, but we will rebuild and come back again.”

Local-favorite Mayer started fifth and drove to a second place result despite being part of a multi-car collision on Lap 14 that saw his No. 96 M1 Racecars Camaro suffer extensive damage. The runner-up finish is the second in as many TA2® Powered by AEM race outings for Mayer, having done the same at Daytona International Speedway in 2019.

“I am feeling ok, I am just a little emotional after that race,” said Mayer. “I am disappointed in how that race ended. The race was a lot of fun. I am happy that I was able to come out ok. I am happy to be here and race with these guys. Hopefully we can come back soon, if our schedule permits, to come back for the win.”

Rafa Matos wound up third in the No. 7 Silver Hare Racing Camaro, taking his third podium of the season. Late for the grid, Matos took the green flag from the back of the field. Running third on a restart at the start of Lap 14, Matos took second in Turn 1 and got past Skeen later on the lap.

However, with numerous cars crashing in the kink to bring out the red flag, the race was brought to an immediate stop, with scoring reverting to the last completed lap by the field per Trans Am racing regulations. 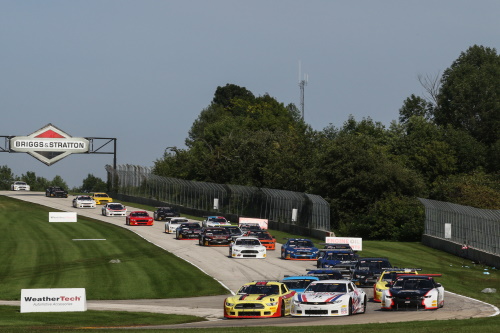 Tyler Kicera, a star of the Trans Am by Pirelli Esports Championship, took fourth in the No. 4 Carbotech Brakes Ford Mustang in his season debut, while Brad McAllister won the Cool Shirt Cool Move of the Race Award after placing fifth in the No. 24 Portland Implant Dentistry.com Mustang as the Trans Am West Coast Championship driver made his National Trans Am debut.

Rain and lightning earlier in the day resulted in more than a two-hour delay for the race.

The opening laps set the tone for the contest. Pole-sitter Cameron Lawrence was involved in an incident following the green flag and the No. 8 3-Dimensional Services Camaro failed to complete a lap, while Thomas Merrill pitted early in the No. 81 Diehl-Merrill Racing/HP Tuners Ford Mustang and returned to racing only to be involved in the last-lap incident in the kink.

The race went to caution on the fifth and 12th laps for separate incidents before the Lap 13 restart, which became the final result-scoring lap.

Bob Lima was the Masters winner, placing 12th in the No. 63 Lima Company Camaro.

The next scheduled race for the Trans Am Series presented by Pirelli is at the historic Watkins Glen International on September 11-13.