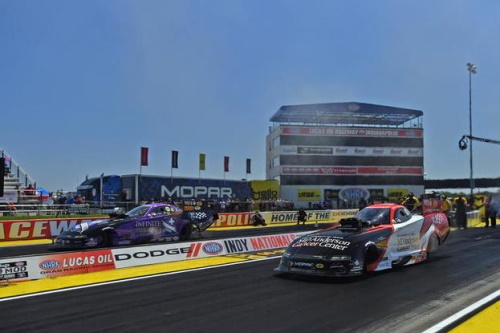 On his first pass of the weekend, Johnson posted a 3.976-seconds run at 318.54-mph, a time that held up through both Saturday qualifying sessions, to earn his second No.1 qualifier honor of the restarted season. He’ll face Alexis DeJoria as his first round opponent in eliminations.

“We have a really solid race car here at Indy,” said Johnson, who sits second in the Funny Car points battle behind DSR teammate Jack Beckman after a win at the Arizona Nationals early in the year, along with a runner-up and semifinal finish at the first two Indianapolis races in July. “Three races here and we’ve been No. 1, 2 and No. 1 again. That gives you a ton of confidence going into race day knowing you have such a good car. Now if we can just turn these No. 1 qualifying positions into a win. We’ve gone rounds at these first two Indy races, the only thing left on the plate is a win.”

Hagan, who is once again showing off a demon-red, black and chrome livery on his Mopar Dodge Charger SRT Hellcat Redeye, qualified second and hopes to drive his way to a third consecutive final elimination round appearance and a second win to help him move up from his third place position in the championship standings.

In the last national event, Hagan advanced to a final round elimination against Beckman that was postponed due to rain until the U.S. Nationals next month. The two are paired up again on Sunday, this time for a first round match-up after Beckman hazed the tires on both his run to qualify 15th.

Capps rounds out the trio of qualified Dodge Charger entries as the third-seeded Funny Car and will have lane choice over No. 14 qualifier Tim Wilkerson.

In Top Fuel qualifying, Leah Pruett followed up her No. 2 qualifier performance from the previous event with the third quickest run of the day to earn two bonus points. She did it aboard her DSR dragster which, for a second event, featured a fierce-looking Redeye livery, similar to Hagan’s, to promote the July reveal of the 2021 Dodge Charger SRT Hellcat Redeye, the most powerful and fastest mass-produced sedan in the world. Pruett sits second in the Top Fuel championship standings and hopes to add a few more points by making her way through a few rounds of eliminations, starting with No. 14 qualifier, Shawn Langdon.

Qualifying highlights will be broadcast on FOX Sports 1 (FS1) on Sunday, Aug. 9, from 11 a.m. -1 p.m. ET. Elimination rounds at the Dodge NHRA Indy Nationals presented by Pennzoil begin at 10 a.m. (ET) on Sunday, Aug. 9, while television coverage will air on the FOX national network from 1-4 p.m. (ET) and will include LIVE final round action.

“This is what’s exciting about one day of qualifying and only two runs. When you give teams four runs, the cream typically rises to the top. With just two runs, some of the big teams stumble during qualifying and then you see some real interesting first round matchups. We made it far enough that I think we can make a couple of adjustments and be in great shape for tomorrow. Would we rather have qualified higher and got bonus points, of course. We didn’t intentionally qualify 15th, but we still have a car that can win tomorrow.”

“It’s obviously a tough round tomorrow with (Jack) Beckman and it seems that we’ve been racing our teammates a lot in the first round lately. With just two qualifiers, it’s tricky. We were in that position last week trying to get in the show on Q2 and that makes it tough. It’ll be a good race. We were supposed to race Beckman in the finals here a few weeks ago before it rained. Tomorrow at 10 am it will be cool and fast and it’s anybody’s ball game.”

“We have a really solid race car here at Indy. Three races here and we’ve been No. 1, 2 and No. 1 again. That gives you a ton of confidence going into race day knowing you have such a good car. Now if we can just turn these No. 1 qualifying positions into a win, and we’ve gone rounds at these first two Indy races, the only thing left on the plate is a win.”

“We couldn’t wait to get back here for the Dodge Indy Nationals presented by Pennzoil because the last few weekends here we just haven’t had much luck. Off the trailer, (crew chief Rahn) Tobler and the guys did a great job. We unleashed with a 3.98 and ended up third. We went back there for the second run and tried to improve a little bit. The ladder was already looking a little nutty where you had some really good cars that hadn’t run well in qualifying and that’s just a product of two qualifying runs. We just have to focus on making those two runs as good as possible, so you don’t end up running a strong car like one of our DSR teammates in the first round. We qualified well and race a really good car in Tim Wilkerson. It’s going to be hot, humid, and all that fun, exciting stuff this NAPA team loves, but Wilkerson is also very good in those types of conditions.”

“Continuing on with the momentum from the last Indy race, our fierce Redeye Top Fuel dragster is in good shape, and in a good position for a very strong Sunday. We qualified No. 3, made two consistent runs, and we’re chipping away at getting more power and keeping it hooked up. We’ve got a healthy-running car right now, and we’re definitely in our groove zone. We’ve got a tough competitor first round with Shawn Langdon, and as I’ve said before, it’s one round at a time on race day. We’ll start early in the morning, and I’m most definitely looking forward to it. It’s the Dodge Nationals and we’re in the Dodge Redeye, and we’re going to charge our way through the field tomorrow.”