Lindenhurst, New York (August 9, 2020) – After a very successful debut weekend in the Blue Marble Radical Cup at Road America last month, Group-A and Steve Jenks were looking to step it up a notch. The duo accomplished just that, raising the ante with 3 podiums in round two at Barber Motorsports Park.

Friday would see a tremendous amount of track time offered to all of the Blue Marble Radical Cup Series drivers with over 3 hours of track on deck on Friday alone. This was the first trip to Barber Motorsports Park for both the team and driver. The Group-A Racing machine rolled out of the trailer strong with Steve Jenks finishing in the top 3 in every session in which he participated. The team would sit out the end of the day with rain moving in. 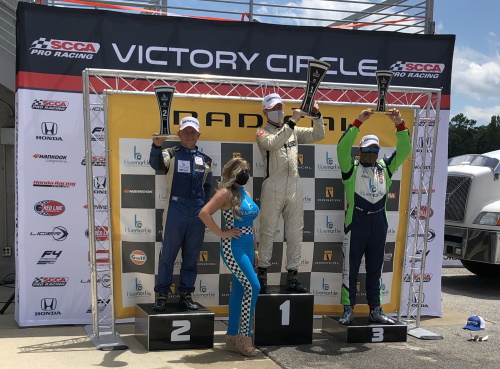 The strong pace on Friday left everybody feeling very optimistic going into qualifying Saturday morning and the first of three 40 minute races of the weekend. Sadly, qualifying did not go quite to plan, with a start-stop session and struggle to get a clear lap saw Steve Jenks ending the session a disappointing 7th. The driver kept his head up going into race one knowing he had a very strong car underneath him to move his way forward. Jenks would do just that, instantly jumping up two spots to 5thon the opening lap. He continued to set fastest lap of the race as he cut his way through the field. Barber Motorsports Park is notorious for being difficult to pass, but Steve Jenks was proving that wrong in his Group-A Racing Radical 1500 SR3, catching cars at a rapid rate and quickly passing them as well. Steve continued this all race long running from his 7th starting spot up to 2nd! Unfortunately, he just ran out of time to make his move on the eventual race winner. This result brought both the driver and team’s first podium result in just their second event ever in the series.

Race two would see Jenks starting farther up in 3rd making work a bit easier than race one. A bottled up start saw Jenks lose two spots falling to 5th, but gained one back before the end of the opening lap. The entire race saw the top 4 cars running nose-to-tail the entire event, running identical lap times to one another and nobody giving an inch. Around mid race, Steve Jenks was able to take advantage of some lap traffic to make a maneuver which would move him up to 3rd. Still it would remain a four car battle all inches apart from each other. Steve made a close look on competitor George Kurtz for second on the final lap coming to the checkered side-by-side, with Steve coming home in 3rd. Another great result starting a podium streak for the Colorado driver and Group-A Racing team.

Race three saw an early yellow creating a strategy decision to be made, with the mid race mandatory pit stop. When the race went back to green, points leader Indy Al Miller came into the pits instantly, while Jenks would follow in the next laps and most of the other competitors pitting at the end of the allocated pit window. Jenks was a bit unlucky with lap traffic on his outlap, causing him to get leap frogged by a few competitors in the pit sequence. Steve started to run down his competitors and moved up to fourth when points leader Indy Al Miller would go off which ended his race. The yellow would come out for that, and the lengthy clean up sadly caused the race to never go back to green. In post race review, it was determined that one of the competitors on the podium passed under yellow giving him a penalty, and another jumped his pit stop with him leaving prematurely. The penalty to both would then see Group-A Racing Steve Jenks move up to 2nd in the final result!

The three podium weekend result has everybody in the team feeling upbeat, especially being the team and driver’s only second ever Radical Cup event. Naturally, they will be looking for nothing less than wins at the next round of Laguna Seca in September. The great start sees Steve Jenks 3rd in driver points only a few out of the lead. It also sees the Group-A second in team points despite them being the only single car team! 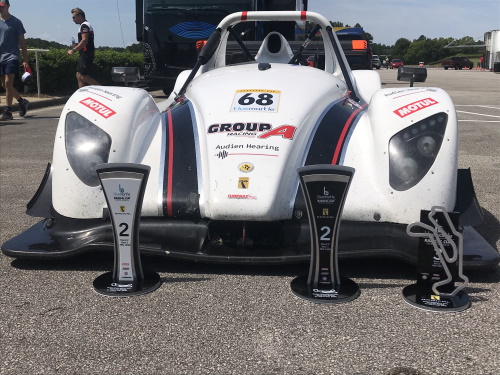 “This weekend has been absolutely spectacular for us” said team owner Jonathan Scarallo. “Lenny and Cory did an awesome job with everything. Steve has made so much progress with these cars in just one event and these results are a dream for our new program with these cars. It’s a true testament to Steve as a driver and the crew in place for us to be such a competitive operation against all these multi car teams that have been running in this series for numerous years!”

“Preparation was the key to Barber” comment Steve Jenks. “We had a good test at Club Motorsports to dial in the racecar and Jonathan and I did multiple simulator sessions prior to the event. We rolled off the trailer ready to go and were able to go fast from the first session and fine tune the rest of the event. I’m learning the race craft with these cars as the races are highly competitive and fun. Barber was a good step forward for us and I am looking forward to the next event with Group A at Leguna Seca.”