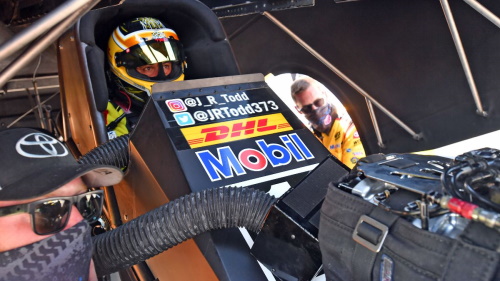 The DHL Toyota Camry Funny Car and driver J.R. Todd took full advantage of a fast race car today at the third NHRA National event in a row outside of Indianapolis. In the final round of qualifying Todd posted the second quickest time of the session and the 2018 Funny Car champion took that momentum into race day as the No. 5 qualifier.

In the first round Todd took out upstart Funny Car driver Mike McIntire with a blistering 3.962 second run at 322.65 mph. The support of team sponsors Mobil1, NGK Spark Plugs and Toyota Racing Development all came together over the weekend to propel Todd to victory. The two-time U.S. Nationals winner never trailed in the race and took his win light into the quarterfinals with lane choice over veteran Cruz Pedregon.

Another three second run advanced Todd to the semifinals. The third round race pitted Todd versus Paul Lee and another tough match-up. Lee smoked the tires at the hit of the throttle and Todd took advantage of the mishap. His 4.329 second pass was enough to advance him to his fourteenth Funny Car final round.

Todd was giving up lane choice to Ron Capps in the final round and the DHL Toyota was loaded up for a strong finish to race day. As the tree flashed Todd hit the throttle and his DHL Camry jumped off the starting line and into immediate tire smoke. There was no chance for Todd to recover and he was forced to watch Capps race to the victory.

“It was nice to go to the final round today but you go that far you want to win the race,” said Todd. “All in all a good day and a good weekend for this DHL Toyota Camry team. Hopefully we’ll get some good momentum going into the U.S. Nationals.”

Quotable:
J.R. Todd on preparing for the U.S. Nationals: “We have had three races in a row in Indy and the next one Labor Day weekend is the big one. I have no doubt that the U.S. Nationals will feel different.” 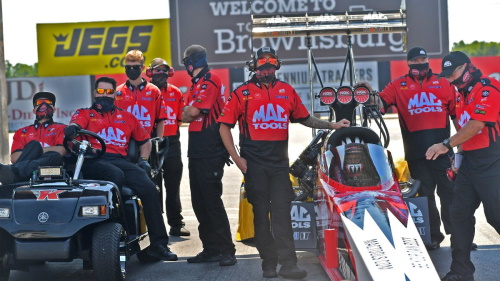 Doug Kalitta Continues to Lead Points and Races to Another Semifinal

Doug Kalitta and the Mac Tools Top Fuel team will leave Indianapolis with the Mello Yello point lead for the fifth race in a row of the 2020 NHRA season. Yesterday the team battled through two frustrating qualifying sessions and rolled into race day as the No. 12 qualifier. The veteran team was not deterred and focused their attention on the first round match-up with Cory McClenathan.

“We started out 12th and we kind of missed it in qualifying,” said Kalitta. “The cooler conditions definitely helped us in the first and second round.”

Race day showed a whole new Mac Tools team as Kalitta and his Rob Flynn tuned Top Fuel dragster roared to a first round win with a stout 3.767 second run. It was a flawless run to start the day and add another round win to Kalitta’s season stat total. Kalitta never trailed in the race and took the win light as well as lane choice to the second round against Clay Millican.

The quarterfinal race was another dominating performance by Kalitta and the Mac Tools team. The support of Toyota Racing Development, Mobil1 and NGK Spark Plugs once again rose up as Kalitta’s scoreboard lit up 3.775 seconds after he launched off the starting line. It was the quickest run of the session and propelled Kalitta to his fourth semifinal of the season.

Racing one of the toughest independent teams on the tour in Terry McMillen Kalitta was striving to race to his fourth final round of the season. In one of the closest races of the day that was decided by inches at the finish line the Mac Tools dragster narrowly missed another win light.

“We got beat in the third round which was disappointing on a day like today,” said Kalitta. “We were doing well the first two rounds. We had a little thrash before the third round with the rear end. Usually a little thrash helps everything. That didn’t work out today. We just got out there and smoked the tires. Terry did the same thing. A little better light I probably could have had him. It was a missed opportunity really.”

Quotable:
Doug Kalitta on heading to U.S. Nationals to defend his title: “There is no doubt we want to be ready for the U.S. Nationals. These three races in Indy have given us a lot of data and we will be looking that over plus the info from the DHL team. We will have two strong race cars for that race.” 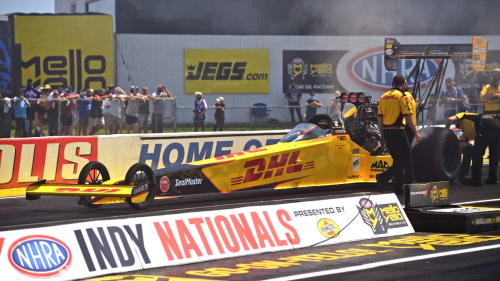 The DHL Kalitta Air Top Fuel dragster made its best showing of the weekend when it counted the most. After two tough qualifying runs Shawn Langdon was entering the third installment of NHRA National events in Indianapolis from an unfamiliar starting spot, No. 14 in the sixteen car field. The team had been steadily improving on their runs on Saturday and was confident they could make an even better run in the first round.

“We were hazing the tires down track on Saturday and that cost us,” said Langdon. “With only two qualifying runs you can get behind the eight ball pretty quick out here. I know Connie and these DHL guys have been figuring somethings out so I am feeling good going into the first round. Anything can happen and you just have to be ready to take advantage of every opportunity.”

In a tough first round match-up with Leah Pruett the DHL dragster was up to the task. Langdon got the jump off the starting line and was on a great run. While he was making his best run of the weekend Pruett was on a solid run as well. At the finish line it was Pruett getting the win light after she made the quickest run of the event. Langdon and his DHL team improved tremendously from qualifying posting a 3.839 second run at 304.19 mph which would have qualified him No. 3 during Saturday’s qualifying sessions.

“That was a great run and I just wish we could have laid that down yesterday,” said Langdon. “This new schedule can sometimes bite you and you just have to roll with it. I know what this team is capable of and we just need to combine a good day of qualifying with a good day of racing on Sunday.”

This was the third consecutive race in Indianapolis. Today’s event was originally scheduled to be held at Bandimere Speedway outside of Denver. At the end of the month Langdon and the DHL team will be back in Indy for the biggest drag race of the season the U.S. Nationals and the track time he is accumulating now will hopefully pay off Labor Day weekend.

“Running three national events in a row in Indianapolis has its plusses and minuses. The race I really want to win this year in Indy is the U.S. Nationals Labor Day weekend. We will get a little more qualifying for that race and there is just a different feeling about the U.S. Nationals. I know we will be ready to go for that race,” added Langdon.

Quotable:
Langdon on Top Fuel competition: “You had better be ready every time you strap into your race car. That isn’t anything new but this year with only two qualifying runs and a lot of really tough and aggressive teams you have to bring your best every run. We are grinding with this DHL team and we are seeing a lot of positive results. We just need to translate that to some round wins.”