INDIANAPOLIS, IN (August 9, 2020) – Today Terry McMillen and the AMALIEⓇ Motor Oil Top Fuel team started a race with a brand new perspective. For the first time in the veteran driver’s career McMillen was the No. 1 qualifier. The AMALIEⓇ Motor Oil XTERMIGATORⓇ Top Fuel dragster was up to the task and his Rob Wendland tuned Top Fuel dragster continued to show it is one of the top race cars on the NHRA Mello Yello Drag Racing Series. McMillen knew he had a great race car but he also knew that winning four rounds of racing would be a tough order no matter where he started in the qualifying ladder. 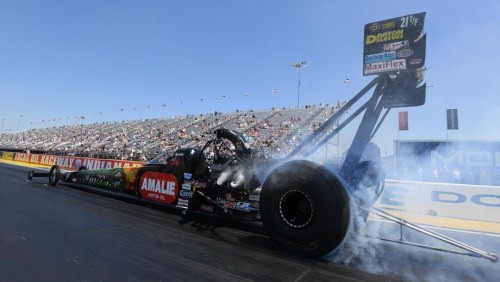 “Honestly, I tried to block the fact I was the No. 1 qualifier out of my head. I didn’t want that on my mind and because you start thinking about that and you get yourself in trouble,” said McMillen. “I just ran it like a normal race day. I didn’t care who was in the other lane. We just looked at every situation and ran our race. Whether we won or lost we were going to run on our terms. The No. 1 spot other than the prestige and finally checking that off our bucket list there was no distraction on race day.”

McMillen’s first round opponent was Lex Joon who continues to build a competitive Top Fuel team. The AMALIEⓇ Motor Oil XTERMIGATORⓇ Top Fuel dragster stepped up and made another strong pass 3.799 seconds to get the win. The win moved McMillen into the second round against fellow championship contender Billy Torrence. In the quarterfinal match-up McMillen took a single for the win after Torrence experienced an issue after his burnout and was shut off by the NHRA starter.

In the semifinals McMillen took out Mello Yello point leader Doug Kalitta in one of the closest races of the day. McMillen got the jump off the starting line and never trailed in the race. Both dragsters began hazing the tires but McMillen was able to hold on and get the win advancing to his first final round since the Dallas FallNationals in 2018.

The final round, McMillen’s ninth of his career, was a showdown with the two-time Top Fuel world champion Steve Torrence. McMillen’s Amalie Motor Oil Top Fuel dragster was looking to pick up its first win since he took the title at the U.S. Nationals almost two years ago. Unfortunately McMillen lost concentration for a millisecond and it was a costly mistake. 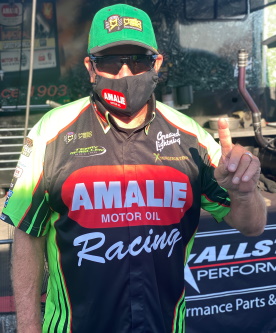 “I just flat lost concentration on the starting line and it cost us,” said McMillen. “This race car is just stout. Ever since we brought it out it has been good. We have been taking it to the shop and reworking a couple things on it and make it better. Every time it goes down the track we learn something new. You can’t complain it is a great car. The driver just cost us.”

Even though McMillen did not pick up his third career win the driver from Elkhart, Indiana has confidence and momentum heading to the biggest race of the year.

“You have to take away that we have a great race car. We have a good team behind that car led by (crew chief) Rob Wendland. That final round I was the weak link. The round before that I was the one that saved it. It is a give and take team effort. Ultimately the biggest positive out of today is we have a wicked good car and the driver just screwed up in the final round in the place you should never screw up. There is no one to blame but me.”

“We are immensely motivated. We had a good car two weeks ago and lost in the semifinals because we put a different blower on it. It was down on blower boost. You look at our team and we are just going rounds and it was the quickest car two weeks ago. It was the number one qualifier at Indy3. That is a statement. On race day it wasn’t necessarily the quickest car but it was probably the most consistent car,” added McMillen.

Photo Credit: NHRA.com/National Dragster for media use only via Terry McMillen Racing