SONOMA, Calif. (August 9, 2020) – Michael Cooper and Blackdog Speed Shop capped a nearly perfect weekend at Sonoma Raceway with another victory in the Pirelli GT4 America Sprint Championship. He drove Blackdog Speed Shop’s No. 10 McLaren 570S GT4 to a 2.780-second win Sunday – his third at the track in as many days. 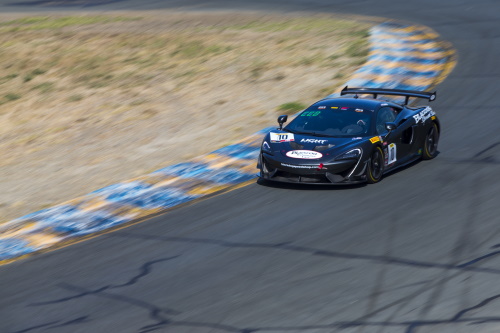 For the second day in a row, Cooper led from the outset and from pole position. He led by nearly two seconds at the halfway point as his two closest pursuers diced between themselves for the better part of four laps. That allowed the McLaren to stretch the lead as Cooper continued his masterful job of managing his tires around a notoriously abrasive Sonoma racing surface.

Cooper and Blackdog Speed Shop unofficially grew their championship leads in the Driver and Team standings to 33 points. The team is on a five-race winning streak and has six wins on the season. The pairing also can each now claim eight victories at the circuit. 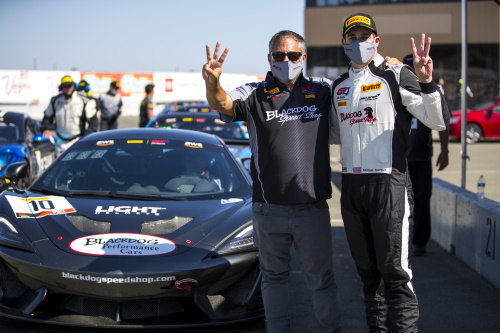 Sunday capped a dominating performance by Cooper and the McLaren during the last three days. In addition to three wins, Cooper also set the fastest race lap each day and took pole position both Saturday and Sunday. He led all 84 race laps on the weekend except one – Friday’s first race when the start was waved off after Cooper grabbed an early lead. Undaunted, he moved to first on the restart after three corners.

The results also made Cooper the first GT-class driver in SRO America/World Challenge to win three consecutive races at the same track and in the same category.

Next up for Blackdog Speed Shop is another three-race weekend at its home track – Road America from Aug. 28-30.

MICHAEL COOPER, NO. 10 BLACKDOG SPEED SHOP McLAREN 570S GT4: “I like a lot of racetracks, but I just seem to be a step ahead at Sonoma. That’s not to discredit anyone else but the results are there. To be honest, the move at the start of Race One on Friday really changed the complexion of our weekend. The Porsche was quicker than us in qualifying, and with how hard it is to pass here we could be talking about three straight second-place finishes. So that move Friday was really critical.
“Winning three straight here and now five in a row since VIR is a great accomplishment. It’s down to the work from everyone at Blackdog Speed Shop and McLaren. We had a goal heading into this weekend of maximizing our points haul. I don’t think we could have ever expected this, though! I’m grateful for the effort and happy with another great weekend at Sonoma.”