KNOXVILLE, IA (August 14, 2020) – Kyle Larson’s historic run has carried over to the biggest Sprint Car event of the year at the “Sprint Car Capital of the World.”

The Elk Grove, CA driver piloted his Silva Motorsports #57 like a fighter jet through traffic to charge from 10th to the lead in 18 laps and win the opening night of “The One and Only” at Knoxville Raceway Thursday night. 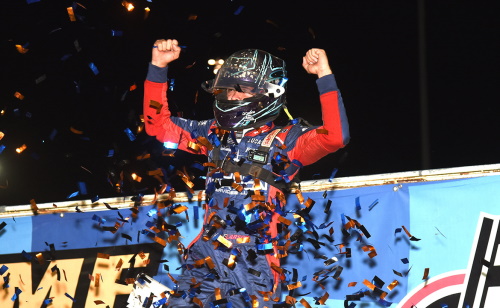 The win is his second World of Outlaws NOS Energy Drink Sprint Car Series victory in row – after claiming his first Ironman title last week – his third Series win at Knoxville in a row, his sixth Series win this year and 14th Series win overall.

“It’s cool to get another win,” Larson said. “Thanks to all of the fans for coming out and watching (on DIRTVision) at home… Thanks to the Outlaws for putting this event on. Just an awesome race there.” 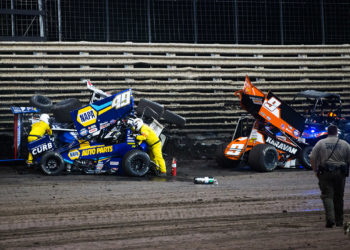 Before he claimed his perch at the top of the mountain in the 25-lap Feature, drama plagued the night for reigning World of Outlaws champion Brad Sweet and 10-time Series champion Donny Schatz. Nine laps into the Feature, Cory Eliason spun in front of Sweet entering Turn 1, causing Sweet to run into him. Then, Schatz piled into them and as their cars slid up toward the wall, Sweet’s teammate James McFadden ran into all of them.

The accident ended the night for all four drivers, giving Sweet his fourth DNF of the season and Schatz his second. The duo held the top two spots in the Series championship points entering the night. Now, with Sweet finishing 24th and Schatz finishing 22nd, they both fell a spot in points as Logan Schuchart propelled himself to the championship lead with a second-place finish.

“It’s a good points night overall,” said Schuchart, of Hanover, PA. “Good for the weekend. We qualified good. We’re good every time we hit the racetrack.”

Schuchart started on the pole for the Feature after being one of the top eight drivers in accumulated points throughout the night and winning the DIRTVision Fast Pass Dash.

After pulling a wheelie to the green flag, Schuchart held off second-place Aaron Reutzel in the first two corners to pull away with the lead. Reutzel kept pace with Schuchart but was never close enough to the Drydene #1S to make a move.

Three early cautions hindered Schuchart’s attempt to run away from the field with Daryn Pittman spinning on his own on Lap 9 and then the incident with Sweet and Schatz a restart later.

When the race resumed, defending Knoxville Raceway track champion Brian Brown rocketed around the top of Turn 1 to go from fourth to second in a corner. Reutzel was then left to fend off last year’s Knoxville Nationals champion David Gravel and Larson, who looked to have 10 more horsepower than everyone else.

Already up to fifth in nine laps, Larson powered his way around the outside of Gravel and Reutzel in one lap. Then, about four laps later he tried to make quick work of Brown by throwing a slide job underneath him but realized the end result would be a collision with Brown and about spun himself out trying to avoid the FVP #21.

It took only four laps for Larson to find a rhythm again and dart by Brown for second. Shortly after, Reutzel also made his way back by Brown for third – where he would end the night.

Larson drove like a man with something to lose. He threw his car into every corner and played a game of chicken with about every car he passed, sliding in front of them with inches to spare, seeing who would lift first. It wasn’t him.

He caught Schuchart with eight laps to go. While the Shark Racing driver ran the top line, Larson ran a lane below him to his advantage. He pulled ahead of Schuchart through Turn 3 and then chopped his nose on the next of Turn 4, making contact with Schuchart’s car and damaging his front nose wing.

Schuchart held on to finish second while Larson pulled away to the $10,000 win.

“As the race went on, I felt like I wasn’t hitting my marks as good,” Schuchart said. “I would have liked to of had a little bit better of a race with Kyle there. I wish his slide job was a little better there, but he’s got a reputation to live up to. That’s where you let other people make the rules and maybe we’ll get him next time.”

Larson knew when he caught Schuchart he had to make his move quick if he wanted to ensure another victory.

“I was able to get by [Brown] and track Logan down and hit the bottom really well in (turns) one and two and got a run on him,” Larson said. “It felt like I needed to take advantage of that before we got to heavier traffic and slid him and felt some contact. So, glad to see him not in the wall or anything like that. Just, hard work there. Heartbeat is up again.”

With a fifth-place qualifying effort, a third-place run in his Drydene Heat Race, a second-place run in the DIRTVision Fast Pass Dash and a third-place finish in the Feature, Reutzel ended the opening night of “The One and Only” with the points lead for the three-day event – Schuchart and Larson are tied for second, nine points back.

He still wasn’t satisfied, though.

“I feel like we keep getting better and better every time we come here,” Reutzel said. “Tonight, if I don’t screw up that restart, I may take the lead before Kyle gets to us and run away, I don’t know. I definitely made some really bad mistakes as a driver and put myself in a bad situation where I couldn’t contend for the win.”

(RELATED: “The One and Only” points standings after night one)

The star-studded field of drivers that raced Thursday night at Knoxville Raceway will return Friday night – for round two of “The One and Only” – to compete for another $10,000 and look to earn more points toward Saturday’s Brownells Capitani Classic presented by Great Southern Bank. Get tickets by clicking here. 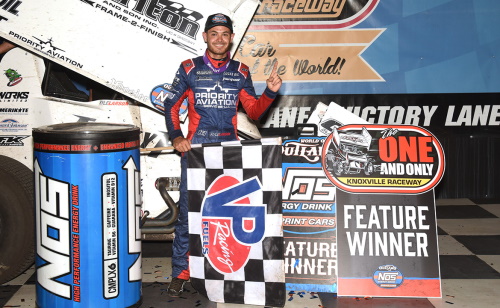