Indianapolis, Ind. (August 14, 2020) – Jack Harvey took the No. 60 AutoNation / SiriusXM Honda to new speeds on “Fast Friday” as the turbochargers were turned up for the annual day of speed in preparation for Qualifying for the 104th Running of the Indianapolis 500.

Fine tuning the car, Meyer Shank Racing’s main focus was to set up a solid car for Saturday’s qualifying run. After making several improvements from Wednesday through Friday, both the team and Harvey feel confident heading into what will be Harvey’s fourth Indianapolis 500 qualifying run.

Harvey closed out the day with a top speed of 231.600 mph which put him 12th quickest overall. Harvey also had several solid no tow runs, putting him 8th in the overall order with a fastest no tow speed of 230.970 mph. 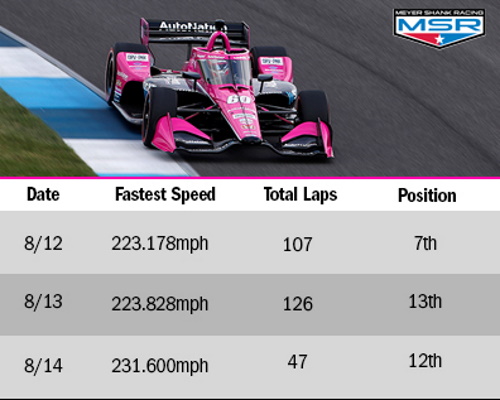