His sweat drenched face showed. His tired body language showed it. And his smile showed it as he waved the checkered flag in Victory Lane for the second time this season at Knoxville Raceway.

Gravel led from green to checkers in the 25-lap Feature during the second night of “The One and Only” but had to survive challenging conditions and a late race charge for Kyle Larson to claim his fourth World of Outlaws NOS Energy Drink Sprint Car Series win of the season. 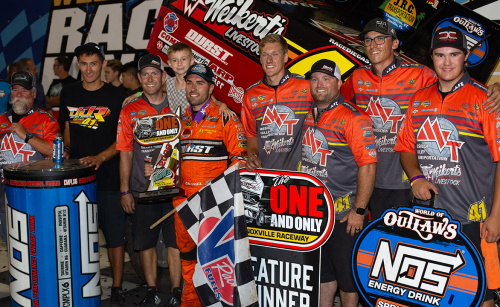 “It was very very daring there in (turns) three and four,” said Gravel, of Watertown, CT. “Dirty air makes it worse. One and two was fairly easy to run the bottom. But it made you step up your game and stay up on the wheel. I know guys would be charging pretty hard. I was able to get by some (lap) guys and didn’t get held up too bad. Definitely got to clean up a few corners to make sure we win these longer races.”

A fifth-place run Thursday night at the historic half-mile was suitable but not sufficient enough for Gravel and the JJR team. They stepped up their game on Friday, returning to the winning caliber level that brought them a Nationals victory about a year ago.

Gravel qualified third Friday night and then rocketed from eighth to third in his Drydene Heat Race. That resulted in him being the top points earner for the night and the first to draw for the DIRTVision Fast Pass Dash. With the support of Lady Luck, Gravel drew the #1 pile for the Dash and went on to dominate the six-lap event.

At the drop of the green flag for the Feature, Gravel mastered the relationship between torque and acceleration to launch ahead of the 25-car field. By the time he reached the flag stand to compete the first lap, his Mesilla Valley Transportation #41 car was already half a straightaway ahead of second-place Rico Abreu.

As Gravel pulled away, Abreu became his best friend. The California driver made life hell for Larson, who moved into third on the first lap and was forced to work overtime to get by Abreu. The two Californians waged war for second place in the first eight laps, testing who could throw a better slide job each corner. And while they did, Gravel continued his escape.

With 16 laps to go, Larson was able to get a run underneath Abreu down the front stretch and dart ahead of him into Turn 1. Abreu attempted to dive underneath Larson entering the corner but was left minimal room to do so and had to abort his move. That allowed Larson to drive away and reigning Series champion Brad Sweet to make the pass on him for third, as well.

By the time Larson finally secured the runner up spot, Gravel already had about a two second lead. With challenging track conditions for Gravel and heavy lap traffic ahead of him, a late race charge from Larson looked inevitable. 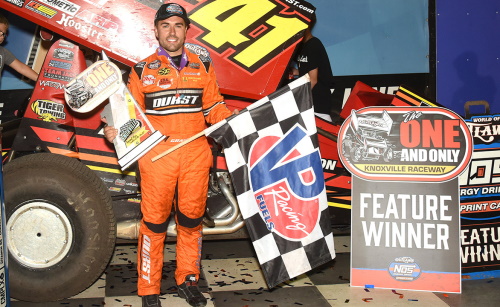 Gravel was able to put distance between himself and Larson through Turns 1 and 2 but struggled to find grip through Turns 3 and 4 and off the corner. The added obstacles of slower cars allowed Larson closed in every lap.

With five laps to go, Larson was within striking distance. Gravel switched to the bottom line through Turns 3 and 4 for a couple of laps to try and find traction, but instead he allowed Larson to rip the top and charge to his bumper.

With the white flag in the air, Larson was in prime position to upset Gravel’s night. He dove underneath the red JJR car down the front stretch and had his finger on the trigger to pull the winning slide job. However, when he got to the isle, the lane was closed. Gravel entered Turn 1 through the middle, just above the slower car of Daryn Pittman, and used him as a pick to kill Larson’s attempt at a pass.

The move ultimately secured Gravel the win as he was able to find enough grip through Turns 3 and 4 to hold off Larson by 0.203 seconds at the finish line.

“All I have to say is Paul Silva and Kyle Larson are really good, but when (JJR crew chief) Philip Dietz and David Gravel are on, we can compete with the best,” Gravel said. “Tonight, it showed. Kyle is a good friend. He’s made us step up our game. This year has been a struggle to find a balance. Tonight, we felt really really good. Had the motor running right tonight. It was definitely intense there. Those lap cars, who knew where they were going?” 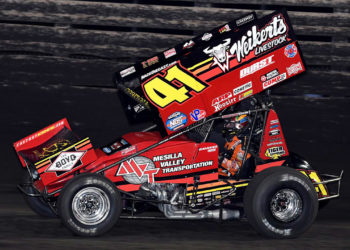 “Our race car was really good,” Larson said. “Especially when I get to traffic, I feel really good. David did just a little bit better of a job than me at some points. In the early points we got into traffic and then, (turns) one and two is so good you can kind of go anywhere. I couldn’t make it good enough around to stay close to him off (turn) two. We’ll take a second. A good points night.”

Sweet rounded out the podium, which is a solid rebound from his disastrous Thursday night run. The Grass Valley, CA driver had suffered his fourth DNF of the year due to being involved in an early wreck.

“It feels like a win for us,” Sweet said. “We needed a good rebound after last night. This team has been through a lot with the NAPA Auto Parts car. But we never give up.”

His run also helped him gain some points on championship points leader Logan Schuchart, who finished ninth. He’s now 12 points back from the lead. Ten-time Series champion Donny Schatz, who also suffered a DNF Thursday night, rebounded to finish 11th, but it was still not the night he and his Tony Stewart/Curb-Agajanian Racing team were looking for. He had to use a rare provisional to start 25th in the Feature.

Gravel’s win has locked him into the Feature and DIRTVision Fast Pass Dash for Saturday’s $50,000-to-win Brownells Capitani Classic presented by Great Southern Bank. Larson, Schuchart and Aaron Reutzel are also locked in. The rest of the start-studded field will need to race their way in through four Qualifier races or the D-Main, C-Main and Last Chance Showdown.

With a red and black paint scheme that resembles Jason Johnson’s 2016 Knoxville Nationals winning car, the thousand pounds of weight will be back on his shoulders Saturday night. However, having to win under pressure at Knoxville is nothing new for the 2019 Capitani Classic winner and Knoxville Nationals champion.

The World of Outlaws NOS Energy Drink Sprint Car Series will conclude “The One and Only” three-day event with the $50,000-to-win Brownells Capitani Classic presented by Great Southern Bank on Sat., Aug. 15 in front of a sold-out crowd.

If you can’t make it to the track, you can still watch all of the action live on DIRTVision. 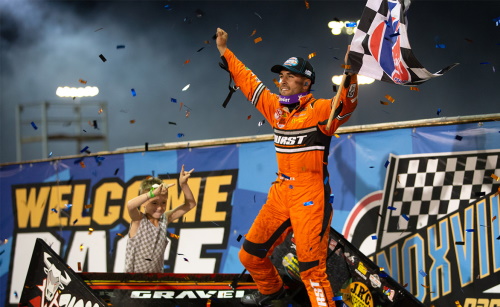