Innisfil (ON) (August 16, 2020) – Kevin Lacroix had a chance at victory in the first round of the NASCAR Pinty’s season at Sunset Speedway but had to settle for 8th lace after a crash on the last lap. Well deserved podium in the second race of the weekend for the Bumper to Bumper team.

Sunset Speedway, based just outside of Toronto, hosted the inaugural round of NASCAR Pinty’s on Saturday, August 15. Kevin Lacroix and the Bumper to Bumper team prepared for a long day with only a half-hour practice session preceding the two races: the QwickWick 125 and the Canadian Tire 125, two 125-lap events separated by a 30-minute break to allow the competitors to adjust their set up. 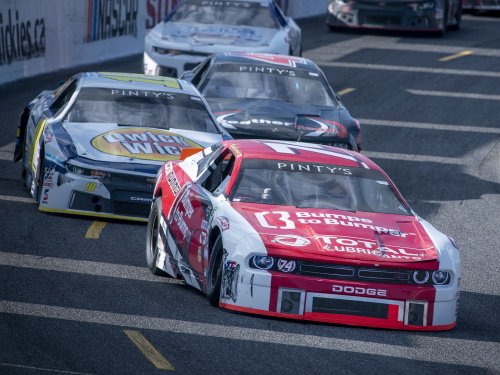 To determine the starting grid for the first race, drivers had to draw their order for the 2019 championship. Kevin, being the highest-ranked driver in the race, drew first…the last spot!

Starting from the last position on the grid, he didn’t settle in the last place and started making his way through the field. He had the opportunity to battle on the track with almost all the Top 10 drivers, making the race all the more exciting as they were all contenders for the win. “The field was extremely strong today,” said Kevin. “Almost every driver in the Top 10 could have won the race,” said the driver of the #74 Bumper to Bumper / Total / PFC Brakes / Lacroix Tuning.

As usual, the end of the race was nothing short of dramatic. The race ended on a green, white, checkered flag, and Lacroix risked it all to take the win, which worked for a half lap. Finally, an accident involving several cars, including Louis-Philippe Dumoulin, Jason Hathaway, and Lacroix, followed. However, Dumoulin claimed the win, while Lacroix finished in 8th place, followed by Hathaway. 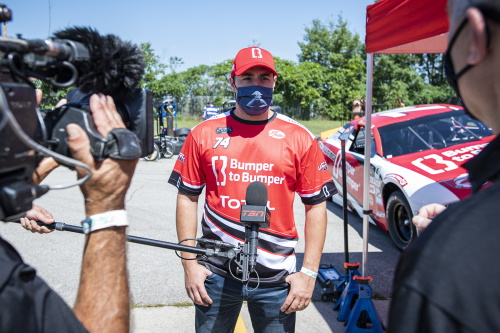 “The car was excellent, it’s too bad we couldn’t make it to the podium because we had excellent adjustments at the end of the race,” said Kevin.

The second event, the Canadian Tire 125, went without any problems, major neutralizations, or accidents. It was a new draw that determined the starting positions, and once again, Lacroix took one of the last spots on the grid. The team worked very hard during the break to allow Kevin to get back on track after the accident on the previous race’s final lap.

Taking the green flag in 12th position, he quickly made his way up to 2nd, where he stayed most of the race, feeling the pressure from Treyten Lapcevich. During the last laps, Connor James took second, leaving Kevin on the third step of the podium for his NASCAR Pinty’s return. Jason Hathaway was unstoppable on the 1/3-mile Ontario track and won the event.

“I’m happy with our third position because the team did a lot of work during the break, more than I thought possible, and the car was as good as it was before. This race format makes the day very intense for everyone, but it’s nice to see that even if there are no fans at the track, we are still followed on social media.”