BROWNSBURG, Ind. (August 19, 2020) – Giving back has long been a core value of the Don Schumacher Racing fabric, and with the launch of the Chandler family ‘Giving Car’ program in 2014, DSR significantly amplified its charitable efforts over the past seven years.

The program, which enables a non-profit to be recognized through a dedicated tribute livery at no cost to the organization, was started by philanthropist and longtime friend of DSR, Terry Chandler. Following Terry’s passing in July 2017, her husband Doug Chandler opted to keep the program going in her honor, extending its run for an additional three years by personally funding the 11,000-horsepower Funny Cars piloted by Tommy Johnson Jr. and Jack Beckman. As DSR celebrates its final stretch of the Chandler family partnership, which will conclude at the end of the 2020 NHRA season, drag racing’s winningest organization reflects on some of its proudest accomplishments: 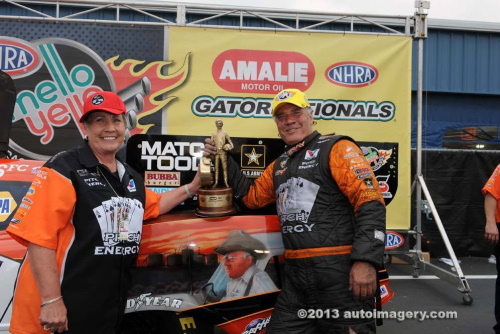 Terry Chandler and Johnny Gray celebrate in the winner’s circle during the 2013 NHRA Gatornationals in Gainesville, Fla.

In 2013, Chandler and her brother, Johnny Gray, partnered to sponsor the Funny Car he then drove for DSR, funding the car in honor of their father, the late John R. Gray. At the end of the season, Gray retired from driving, and Tommy Johnson Jr. was added to the DSR roster as Gray’s replacement. Although her brother was stepping aside, Chandler had found her home at DSR, and continued to sponsor the team with her husband Doug. She used the race car as a platform to promote awareness for a great cause: The Make-A-Wish Foundation. 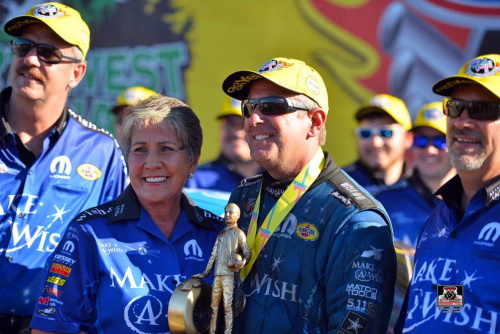 Tommy Johnson Jr. and Terry Chandler were proud to represent The Make-A-Wish Foundation, a non-profit organization that provides memorable events for children with life-threatening medical conditions.

In 2014, DSR and Chandler began the tradition of hosting ‘Wish Kids’ and their families. These special guests were welcomed into the VIP hospitality pavilion next to the race team’s pit area at each of the 24 Mello Yello events held across the country. From 2014 through the end of 2019, more than 500 Wish Kids and their families had the opportunity to engage with Johnson and the Make-A-Wish team and tour the pit area each weekend. Although she funded the operation, Chandler insisted that the race car truly belonged to each one of the Make-A-Wish children. Every weekend, she would point to the Make-A-Wish Dodge and tell them, “This is YOUR race car.”

In addition to hosting families, DSR is honored to have helped grant Wishes for four deserving Wish Kids, including fulfilling the dreams of an aspiring Jr. Dragster racer’s goal of making a pass down the race track, a 17-year-old that wanted to be a race car driver and win a race for a team, a young child’s desire of racing a Pro Stock Motorcycle against Angelle Sampey, and a Leah Pruett fan’s dream of having a pizza party with her favorite racer. 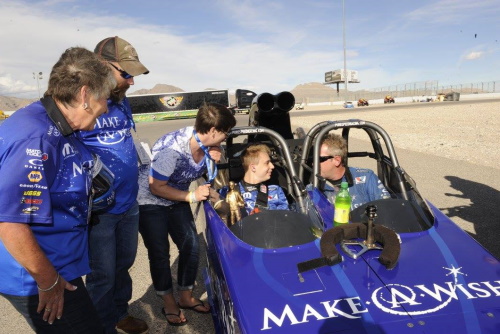 Wish Kid Austin Zimmerline fulfilled his wish of being a race car driver and winning a race when he and Johnson teamed up to defeat Antron Brown and Beckman during the 2014 Las Vegas II event.

During the 2014 season, Chandler’s desire to give back grew even more, and she and Doug began funding a second team at DSR with 2012 Funny Car world championship driver Jack Beckman behind the wheel. The branding for the race car was dedicated to another organization that touched Chandler’s heart: The Infinite Hero Foundation (IHF), a non-profit organization that combats the most difficult front-line issues, both mental and physical, facing returning military heroes and their families.

Chandler and the Infinite Hero team with Beckman, a former U.S. Air Force sergeant, have hosted scores of Americans who, through military service, made tremendous sacrifices for their country. 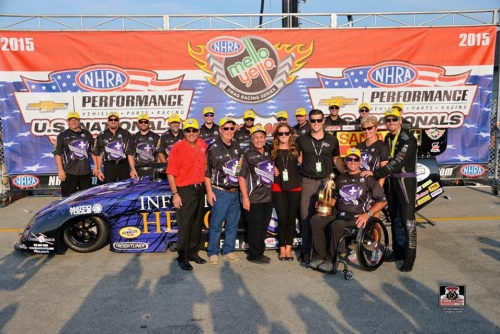 The Chandler family chose Jack Beckman, a former U.S. Air Force sergeant, to campaign the Infinite Hero Foundation Funny Car in 2014. Since that time, Beckman has gone on to win 16 races for Infinite Hero, including the 2015 NHRA U.S. Nationals.

More than $730,000 has been raised to-date through Chandler and DSR’s various Infinite Hero endeavors, most notably through the trackside challenge coin program. During every qualifying and elimination round, Beckman carries multiple coins in the Infinite Hero Foundation Dodge Funny Car. He then signs the coins with the track name, E.T. and speed of the pass, and coins are sold for $100, with 100% of the proceeds going toward Infinite Hero. 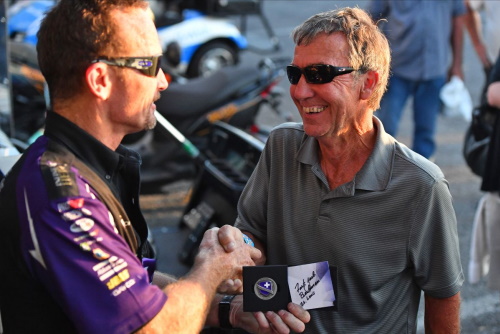 Jack Beckman presents an autographed challenge coin to a fan during the 2019 St. Louis event

There wasn’t a dry eye in Thunder Valley, when at the 2015 Bristol race, Chief Warrant Officer 5 Gary A. Linfoot, U.S. Army (Ret.) stood for the national anthem for the first time since being paralyzed in a helicopter accident during his 19th combat tour in Iraq, thanks to receiving an exoskeleton due to the dollars raised through the DSR/IHF partnership. 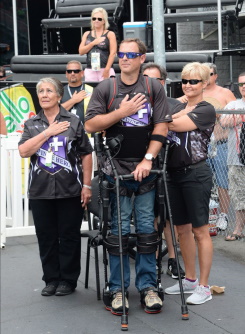 With Terry Chandler and his wife, Mari, by his side, Gary Linfoot stood for the national anthem for the first time in seven years.

At the Mopar Mile-High Nationals in 2018, DSR team owner Don Schumacher and his entire roster of drivers pledged to donate their brains to the Concussion Legacy Foundation through Infinite Hero’s partnership with the Project Enlist campaign. DSR was the first organization to make this pledge on a team-wide scope. 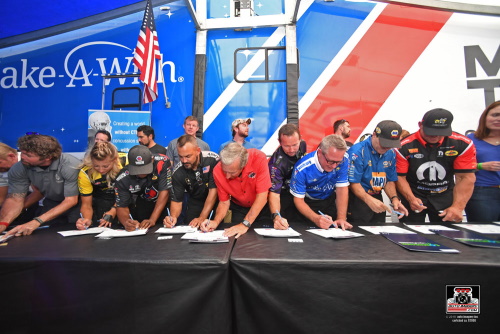 Doug Chandler decided to campaign an MD Anderson tribute car as a way to showcase the institution’s top-notch cancer research and patient care initiatives, and it was announced at the start of the 2020 season that Johnson would pilot that car full time. Chandler has experienced firsthand the exceptional level of care provided by MD Anderson. When Terry was diagnosed with glioblastoma, an aggressive and rare form of brain cancer in 2017, she sought treatment at MD Anderson before ultimately passing away from the disease. 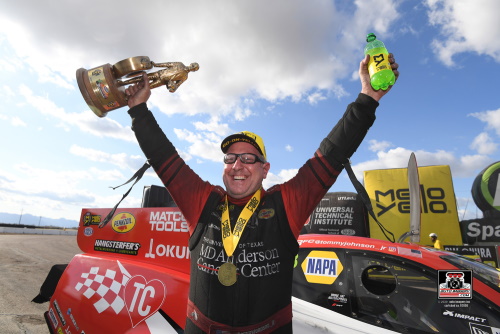 Tommy Johnson Jr. delivered a win for MD Anderson during the 2020 NHRA Arizona Nationals. It was Johnson’s second event representing the world-renowned cancer center which treated Terry Chandler for glioblastoma in 2017, as well as helped Don Schumacher and Doug Chandler overcome bouts of cancer of their own.

By having Johnson banner the University of Texas MD Anderson Cancer Center in 2020, Chandler’s goal is to raise awareness for the organization. His hope is that NHRA fans will rally around the cause and raise money for MD Anderson. Through his TLC Foundation, Chandler has awarded two grants to MD Anderson for glioblastoma research. 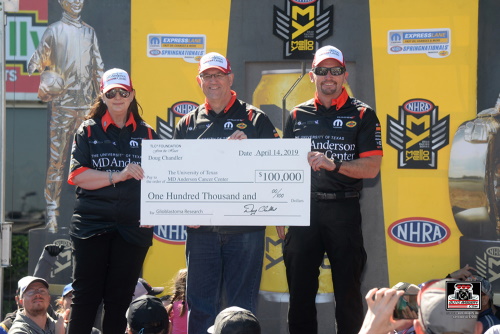 Prior to Johnson fielding the MD Anderson Dodge in 2020, Beckman bannered the cause as a one-off at the 2019 Houston event where he and Chandler family representative, Judy Pittman, presented a $100,000 donation check to the University of Texas MD Anderson Cancer Center on behalf of Doug Chandler and his TLC Foundation in honor of the late Terry Chandler

One of the most beloved traditions at DSR is the annual running of the Riley Kids car at the NHRA U.S. Nationals. Since 2014, Johnson’s Dodge Funny Car has flown the Riley colors at drag racing’s premier event, enabling the Indianapolis-based children’s hospital to receive recognition on a national stage. Each year, Riley Kids and their families look forward to being hosted at the track and cheering on ‘their’ car, thanks to the Chandler family.

Since 2006, DSR has successfully raised $716,000 for the local non-profit organization through its annual Labor Day weekend Open House and December ‘Bowling for Riley’ fundraisers, and looks forward to continuing those traditions beyond 2020 with all eyes on reaching the million-dollar mark. 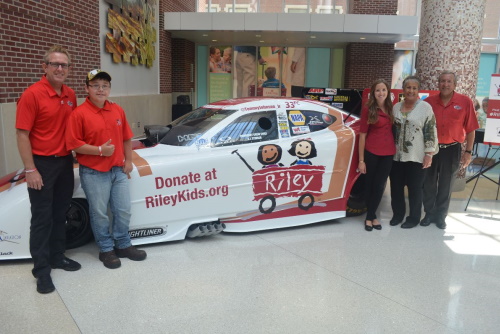 “We had an incredible run with the ‘giving car’ program,” said Megan Schumacher, VP of Don Schumacher Racing. “Any expectations we may have set were exceeded, and then some. Having the opportunity to meet so many Wish families, granting Wishes, hosting countless military heroes and their families, getting to know the Linfoot family, meeting cancer survivors who credit MD Anderson for being able to overcome their disease; there are just so many truly incredible things that came out of this program, and I know I speak for all of us at DSR when I say ‘thank you’ to the Chandler family.

“Thank you to Terry for having it in her heart to start this, and thank you to Doug for continuing it on for so many years beyond Terry’s passing. It’s hard to express how grateful we are. The Chandlers inspire us all, and they will always be part of the DSR family.”

“It’s always difficult when a sponsorship comes to an end, but this has been much more than that,” said Beckman. “It’s been a relationship and a friendship, and Terry and Doug Chandler have not just enabled me to race for six more years, but I’ve been able to earn more than half of my Funny Car wins with the Infinite Hero Foundation, and that’s truly special. I’ve been in the same room with eight Medal of Honor recipients. We’ve been able to do the challenge coin program, which has not only generated hundreds of thousands of dollars, but has generated hundreds of conversations, and relationships, and connections with military veterans and their families, and it’s just taken my life to a whole new level.

“The memories that have been generated during this six-year relationship are something that I cherish probably more than anything else in my driving career,” added Beckman. “It’s been something that is irreplaceable. We will buckle down, and we will work hard to find funding to continue racing, but no matter what, you can never take away what the Chandlers and Infinite Hero have done for me, my racing, my family life, my personal life, and the thousands of people that they’ve helped along the way.”

“As sad as I am to learn the ‘giving car’ program will not continue, I will be forever grateful for the opportunity to be a part of such an incredible experience,” said Johnson. “Not only was I the Chandlers’ driver, they made me feel as if I were a part of their family. Both Doug and Terry did so many great things for so many people and it was truly an honor to represent them. Not only did we have success on the race track, it was also the lives that we touched. I can’t thank both Doug and Terry enough for what they did for myself, our teams, all the Wish families, soldiers, cancer patients, and Riley kids. The Chandlers are truly special people.”

DSR encourages the NHRA community to continue to support these deserving causes in any way possible. To support MD Anderson, fans are encouraged to visit mdanderson.org/myfundraising and use the DSRFC solicitation code when making a donation. Infinite Hero challenge coins can be purchased trackside or online (infinitehero.org/donate). Fans can also make a donation by texting NHRA to 243725. Information about the annual DSR/U.S. Nationals Riley program will be announced tomorrow, August 20.