SUNNYVALE, Calif. (August 26, 2020) – Following its most successful weekend as part of SRO America and GT World Challenge powered by AWS, CrowdStrike and the CrowdStrike Racing program head to one of the highlights on the race calendar in hopes of adding not just to its collection of trophies for 2020, but also its advantage in the GT World Challenge America Pro-Am Drivers’ Championship.

CrowdStrike Racing enters the event weekend leading in SRO America championship points. George Kurtz and Colin Braun sit first in the GT World Challenge America Pro-Am Drivers standings in the No. 04 CrowdStrike/AWS/DXDT Racing Mercedes-AMG GT3 by a single point. So far in 2020, the pairing has a victory and four other podium finishes. 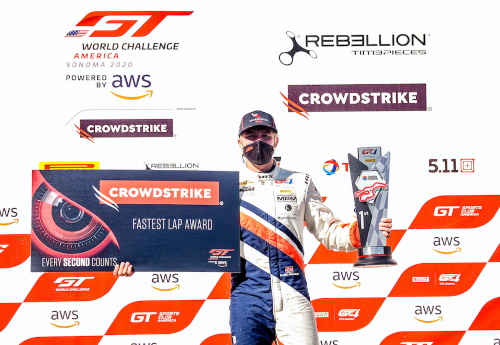 CrowdStrike Racing drivers accumulated six trophies during the most recent race in Sonoma – the biggest haul of hardware on a single weekend since CrowdStrike began its participation in SRO America in 2017.

The goal in Wisconsin is to continue that run of success toward a championship challenge by season’s end. It would establish CrowdStrike as a leader on track to go along with its business role as Official Internet & Cloud Security Provider for GT World Challenge. 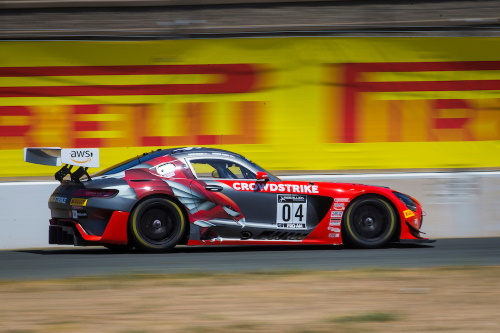 Kurtz and Braun are coming off two stellar events in the No. 04 CrowdStrike/AWS/DXDT Mercedes-AMG GT3: their first victory together at Virginia International Raceway followed by their first double-podium weekend as part of GT World Challenge America Sonoma 2020 Powered by AWS and Presented by CrowdStrike three weeks ago.

With Road America on the horizon, the goal is not just to retain that momentum but extend it for the balance of the season as well.

“Road America is my favorite track on the schedule,” Kurtz said. “It is one of the most famous circuits in the world. It’s fast, enjoyable, and it will be challenging but Colin and I are ready. We have a great opportunity to pick up additional wins and valuable championship points, and we are excited for the weekend.”

Indeed, Kurtz and Braun find themselves in the thick of the GT Pro-Am Championship with a one-point lead heading to Elkhart Lake.

In Wisconsin, Kurtz has two victories in the GTS class to his credit, both coming in his 2017 GTSA Championship season before moving up to the premier GT World Challenge America category. Likewise, Braun has tasted success at Road America with an overall prototype victory in 2018. The Kurtz/Braun pairing hopes to improve on a pair of top-five finishes in last year’s GT World Challenge weekend.

“I’m really looking forward to the Road America event with the Crowdstrike/AWS/DXDT Mercedes-AMG GT3,” Braun said. “This is one of the most iconic tracks in the country. Road America has a little bit of everything: fast and flowing, technical, low-speed, and high-speed… for sure it’s one of my favorite places to race. The track has become a bit lower grip than in years past so tire degradation will be high, which is fun. We have all been working hard to understand the little nuances of our Mercedes-AMG, and both George and I are really feeling good in the car. George has been driving well and I know this track will suit his style. I can’t wait to get back in the car.” 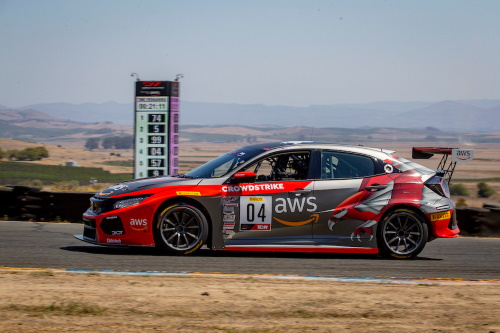 Like nearly every venue on the condensed 2020 calendar, Moses and Boehm will get their first taste of Road America in a top-level racing environment with three Touring Car America races on the weekend.

Both CrowdStrike drivers reached the podium in their respective categories at Sonoma. Moses is eager to carry on the progress from California.

“I’m understandably excited for Road America,” Moses said. “I feel like Sonoma represented a step forward for our CrowdStrike/AWS/DXDT effort with the HPD Civic Type R TCR. I had my fastest race of the year to end that weekend so the comfort in the car is coming. Road America gives us a great opportunity to take another leap and challenge for more podiums and more points in a very tough, competitive TCR field.”

After a pair of fourth-place finishes to start the Sonoma event, Boehm showed the potential of the first-year No. 9 CrowdStrike/AWS HPD Civic Si program in the weekend’s final race. He started second, led the race and posted a season-best, runner-up result.

Like his teammates, he understands how big of a thrill Road America can be.

“Road America is one of those tracks that makes your eyes light up,” Boehm said. “It has everything a driver could ask for: long straights, heavy braking zones and a great mix of corners with varying speeds. It’s difficult to get everything right on a single lap because of the length of the track, but that makes it really rewarding when you achieve it. We are working to establish our CrowdStrike/AWS TCA program as a contender for race wins and a championship. I fully believe we can take another big step toward that this weekend.” 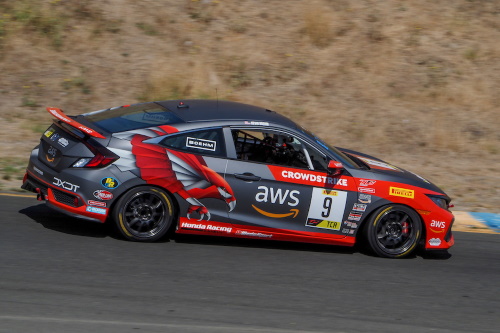 CrowdStrike Racing and Boehm continue their support of Operation Motorsport at Road America. As has been the case at previous SRO America events this season, two military service members will be part of Boehm’s CrowdStrike/AWS/DXDT HPD Civic Si program. It’s an opportunity for CrowdStrike to aid those who have made sacrifices of their own.

Operation Motorsport veterans are full-fledged members of race teams and help in a number of areas including crew duties, tire preparation and tuning.

Operation Motorsport is a veteran -led and -operated, 501(c)3 Not for Profit, based in Brighton, Ontario, and Raleigh, North Carolina that serves Canadian and American service members and veterans. The program was founded on the basis of three simple words: Excite, Engage and Empower. The premise is to engage ill and injured Service Members and veterans affected by military service, through motorsport activities to aid in their recovery and rehabilitation. 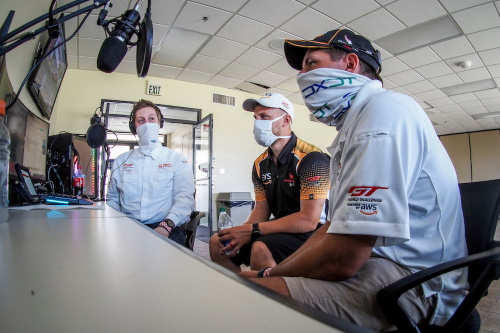 The GT World Challenge Powered by AWS and TC America championships will return to action at Road America on Aug. 27-30. For more information on the series, and to watch the live GT races with commentary by CJ Moses, Kevin Boehm, and Kyle Heyer, visit the new crowdstrikeracing.com. – The direct link to this weekend’s livestreamed GT races with commentary from our TC drivers is: crowdstrikeracing.com/roadamerica/