BROWNSBURG, Ind. (August 28, 2020) – Between fielding the largest number of cars in the NHRA Mello Yello Drag Racing Series, and keeping up with the demand for regular livery updates and special ‘one-off’ schemes, ensuring Don Schumacher Racing’s (DSR) fleet of championship race cars are looking sharp while on the track is no small task. In 2019, it was estimated that DSR campaigned more than 30 different paint schemes among its Top Fuel dragsters, Funny Cars, and Factory Stock Showdown Dodge Challenger Drag Paks, and printed 63 wraps overall including branding the organization’s trucks and trailers, and completing outside projects for competing race teams. All of the design, printing, laminating, and installation of truck, trailer, and race car graphics is handled in-house at DSR’s 145,000-square-foot Brownsburg, Ind. headquarters, and DSR’s team of graphic design and vinyl installers rely on top-notch equipment, including a large-scale laminator, to be able to handle the workload. 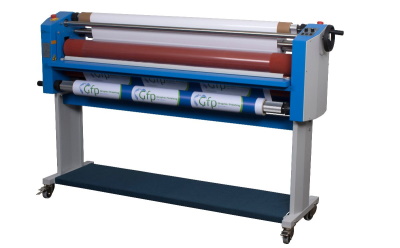 Thanks to a new partnership with Graphic Finishing Partners (GFP), DSR recently took ownership of a GFP 363TH, a state-of-the-art laminator that has been churning out vinyl round-the-clock since it was announced that the 2020 NHRA season would resume last month. Countless wraps, overlays, and decals have gone through the laminator over the last several weeks, including Tony Schumacher’s co-branded Okuma/Sandvik Coromant dragster which will hit the track for the first time at the upcoming NHRA U.S. Nationals, and Matt Hagan and Leah Pruett’s fierce-looking Hellcat Redeye schemes.

According to DSR’s Art Director Aaron Holland, “The GFP 363TH has the features that we need to produce the best-looking wraps in the sport. Specifically, both the heat option and the core-to-core option that the GFP 363TH provides have been game-changers for us. 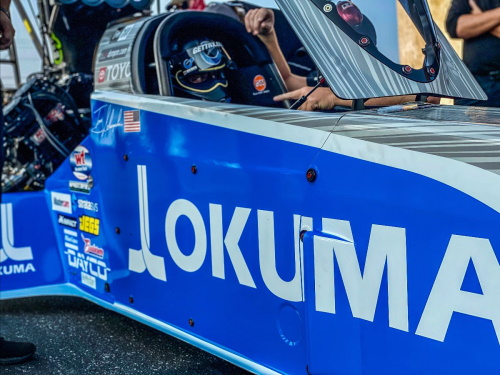 “The heated laminating option eliminates air bubbles in the wraps,” added Holland of how the GFP 363TH allows his team to be able to keep up with the fast-paced demands for new wraps and overlays. “Core-to-core laminating allows us to print large products without having the vinyl pile up on the floor. Vinyl doesn’t ‘walk’ when laminating our wraps, meaning, when you’re laminating a long roll of vinyl, the vinyl tends to move to one side or another if it isn’t properly aligned at the beginning. Some machines don’t keep the vinyl and laminate aligned when laminating and it causes problems. Thanks to our new partnership with GFP, we don’t have to worry about that.”

“GFP is happy to be chosen as the official Finishing Partner for the DSR graphics team,” said Mitch Noble, Manager Partner at GFP. “Our products have been used by leading race teams nationwide to produce vehicle graphics for over 11 years. We look forward to seeing the creative wrap designs from the DSR team at dragstrips and on car haulers all over the nation.”

Fans can catch a glimpse of DSR’s sleek liveries when drag racing’s winningest organization returns to the track for the prestigious NHRA U.S. Nationals at Lucas Oil Raceway at Indianapolis, September 4-6. 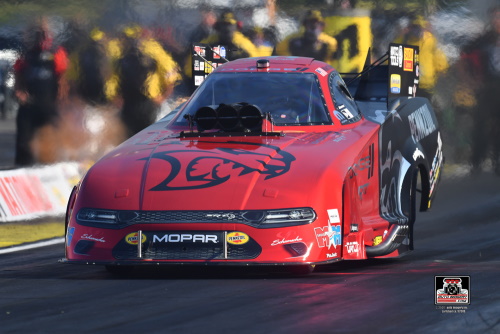