Cooper, in the No. 10 Blackdog McLaren, won for the seventh time in nine races to further open his lead in the Sprint Pro Driver’s Championship with two more races left on the weekend. Missing six races has erased Gaples GT4 Am Championship hopes, but he remained podium perfect in his first event since early March.

Cooper’s win was the 37th in the category for Blackdog Speed Shop and his third straight at Road America dating back to 2019. 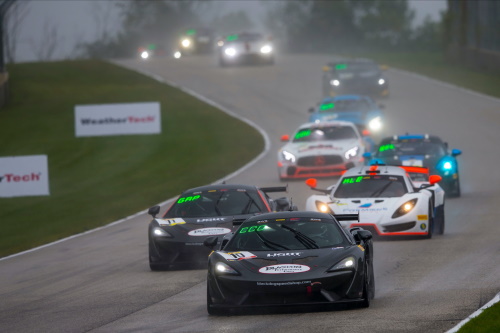 Friday’s race started in damp, tricky conditions as the field began the race behind the safety car. The race went green on the second lap, and the two McLarens settled in with a comfortable pace and were content to wait until conditions let up.

The race turned following the race’s second full-course caution and restart for a car off between turns six and seven with 22 minutes left. Cooper timed the restart to perfection from the third position, took second from Drew Staveley shortly after the start-finish line and swept around the outside of Spencer Pumpelly at the first corner to take the lead.

The fight waged for the better part of 15 minutes with the top three cars running within two seconds until a race-ending yellow with five minutes left.

In the No. 11 Blackdog Speed Shop McLaren, Gaples began third in class and sixth overall. His first race start in more than five months and during a downpour didn’t do anything to deter Gaples. After briefly dropping to fourth in class, he moved back on the podium on the same restart as Cooper made his move and held it through the end. 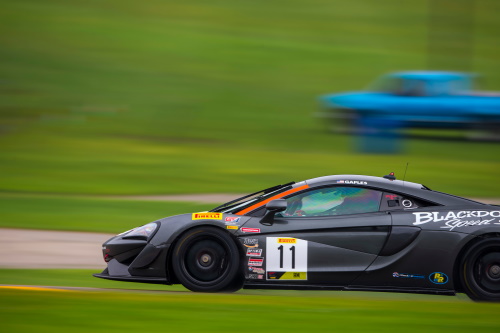 He had a close moment late when two other Am competitors collided and crashed in front of him to bring out the final full-course caution of the race.

Cooper, Gaples and the Blackdog squad returns to action for Race Two at 9:40 a.m. CT on Saturday. Cooper will start second and Gaples eighth on the provisional race grid. All races plus on the weekend will stream live on gt4-america.com.

MICHAEL COOPER, NO. 10 BLACKDOG SPEED SHOP McLAREN 570S GT4: “That was a pretty interesting race, and I’m really glad to come away with another win for Blackdog Speed Shop and McLaren. This is a track that I really like, one the car the car really likes and of course it’s the home track for Blackdog. Getting both our cars on the podium is a great start to the weekend, and congratulations to Tony on his drive.
“On the restart, I could see Spencer through Drew’s windshield so when Spencer went, I went. I knew I had to wait until I was past start/finish to get on the inside of Drew and fortunately he didn’t cover it. I moved to the outside of Spencer for Turn One so I could get a clean shot and be able to see through the first corner. I started to think that I could out-brake him, and so I waited for him to brake, drove it in there and went around the outside. The McLaren was really stable going in and I knew I could make it stick.” 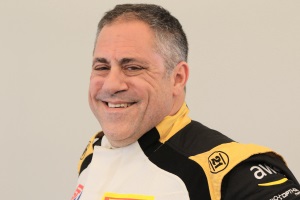 TONY GAPLES, NO. 11 BLACKDOG SPEED SHOP McLAREN 570S GT4: “That was an exciting way to come back! It was good to get back out and race again with our Blackdog team and the McLaren. It was a little tricky with the changing track conditions so the goal was to try and remain steady, not make mistakes and try to take advantage of ones that others made. I think we did that to the best of our abilities. I’m looking forward to the rest of the weekend and hopefully a lot more dry time to really get back in the groove. Congratulations to Michael on another great win. It’s been impressive to see what he has been able to do all season.”