Millgrove, ON (August 30, 2020) – Kevin Lacroix had a solid NASCAR Pinty’s event at Flamboro Speedway last Saturday, claiming second place in the first race and clinching the win during the second race.

Team Bumper to Bumper entered uncharted territories as the series made its Flamboro Speedway debut this past Saturday. However, it was a rewarding weekend for the Saint-Eustache based team, who finished runner-up during the Pinty’s 125 and claimed victory during the 125 PartyCasino. 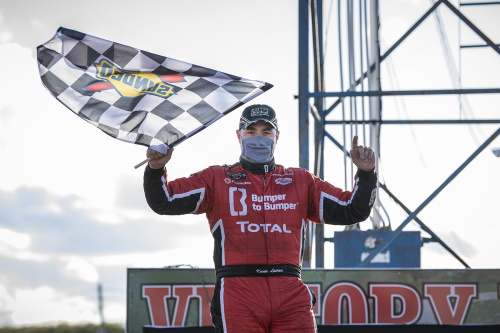 The day got off to a rough start, with rain delaying track activities. However, testing was positive as the driver of the #74 Bumper to Bumper / Total / PFC Brakes / Lacroix Tuning car set the 9th fastest time, “our goal was to adjust the car for the two events of the evening,” explained Kevin. “As it was a track that was still unknown to us, it was important to focus on the car and find the best possible adjustments.”

With the new 2020 race format adopted by the Canadian NASCAR series at Sunset Speedway, drivers were invited to draw their starting positions randomly.

“I had drawn the 7th place, but I started from 6th as a competitor was sent to the back of the field. As soon as the green flag dropped, I started to make my way up to the second position. I thought I could catch up with Jason Hathaway, the leader, but a latecomer gave me a hard time and lost valuable time. However, I am pleased with my second position.”

It was a quiet race for the Saint-Eustache native, “passing is difficult on this oval, there is only one race line that works, and it’s hard to be two cars wide.”

For the other 125-lap race, Kevin was second on the grid, starting on the outside of the first row. “After the start, I took the lead as I went came out of turn one, passing D.J. Kennington. After about two-thirds of the race, Jason Hathaway caught up with Kennington but was still ten car lengths behind me.”

Kevin continued his explanation, “we had a caution with about 30 laps to go, I was a little nervous because I knew Hathaway was fast. It was very close racing in the first ten laps after the restart, there was a little bit of rubbing, but I was able to pull away and ensure my lead.” 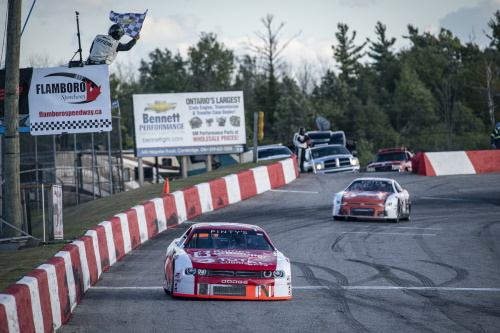 The Bumper to Bumper team is always making sure to have a car that performs well in the long runs, which gives Kevin an advantage at the end of the race, as this well-deserved victory proves.

Overall, it was an intense but highly satisfying day for the team, as Lacroix is now second in the drivers’ standings, 8 points behind Jason Hathaway. He will have one last chance to win NASCAR Pinty’s mini-championship in two weeks at Jukasa Motor Speedway during the two final races of the season.