BROWNSBURG, Ind. (September 5, 2020) – At the 1970 NHRA U.S. Nationals, Don Schumacher raced to his first NHRA national event victory, collecting win No. 1 for what would eventually become the drag racing powerhouse Don Schumacher Racing. Today, at the 2020 NHRA U.S. Nationals, he celebrated his team’s 350th national event win on the 50th anniversary of his Indianapolis triumph.

Following the conclusion of the third and final round of qualifying for Sunday’s elimination rounds, Jack Beckman and Matt Hagan battled it out in the rescheduled NHRA Summernationals (Indy 2) July 19th final round, with Matt Hagan emerging the victor. Hagan rocketed down the track in 3.919 seconds at 328.54-mph behind the wheel of the Mopar Dodge Charger SRT Hellcat Redeye to deliver win No. 350 for NHRA’s winningest team. The Brownsburg, Ind.-based organization is one of a very small handful of teams in motorsports to achieve the landmark triumphant accomplishment. Other domestic motorsports titans who have earned more than 300 race wins include Team Penske, Joe Gibbs Racing, Roush Fenway Racing, and Hendrick Motorsports. After DSR, NHRA’s next winningest team, John Force Racing, lists 280 race wins. 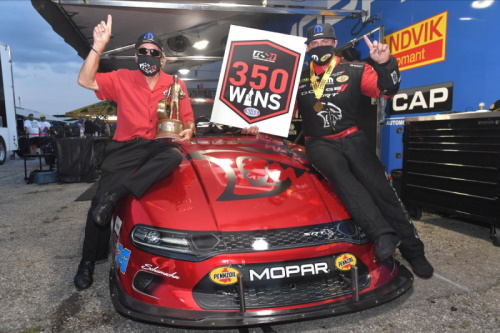 “It’s hard for me to even comprehend the team having that many wins. I’m just amazed at the accomplishments that my teams and team members have made over the last 22 years,” said Schumacher of the milestone victory that further cemented DSR’s position as one of the motorsports industry’s most elite teams.

“I was blessed to win five Wally trophies during my driving time, but that was only a small beginning for what the team has accomplished,” added Schumacher, who owns five of DSR’s 350 wins from his days as a fierce Funny Car match racer in the 1960s and 70s. “A huge thank you to the team. Every person played a part – from the drivers to the crew, management, hospitality, every person in the machine and fab shop; every employee contributed to this incredible number, and I’m just in awe.”

Saturday’s win was No. 35 for Hagan, who has earned all 35 of his Mello Yello victories since joining the DSR ranks in 2009. It was also the eighth consecutive Funny Car victory for DSR, dating back to the October 2019 Dallas event.

“It’s amazing. What a huge milestone, what a legacy Don Schumacher has created here. I lost my brother a couple of years back, and I switched helmets for that race. I know he’s riding with me, but God bless it. I tell you, I’ve probably been as nervous as running for a championship just because you want to get it done,” said Hagan regarding his Summernationals victory that was achieved at the very facility where his boss prevailed to claim his first Funny Car crown 51 years prior.

“This Mopar Hellcat has been running extremely well. (Crew chief) Dickie Venables has been putting a great race car underneath me. It’s just running hard and I’ve been trying to do my job on the starting line. To get 350 wins for DSR; it’s a big part of my career, a big part of Don Schumacher’s career. To have a Wally already on Saturday night at the US Nationals, the Big Go, it can only get better from here.”

Schumacher stepped away from racing in 1974 to focus on his young family and expanding Schumacher Electric Corporation, the world’s largest battery charger manufacturer and market leader in the automotive battery charging and jump-starting category. He returned to drag racing at the 1998 NHRA U.S. Nationals with son Tony in the driver’s seat of a Top Fuel dragster, and began assembling what has become a drag racing dynasty. In just over two decades, DSR has collected 345 NHRA Wally trophies and 17 NHRA world championships.

Schumacher has seen his teams double-up 65 times, triple-up twice, and has enjoyed watching his son race to victory 84 times, making the younger Schumacher the most-decorated Top Fuel driver of all-time. Including the elder Schumacher, 20 drivers have contributed to DSR’s record-setting pace that the team aims to extend on Sunday when 10 DSR cars competing in three different categories will attempt to bring home the hardware at the U.S. Nationals, drag racing’s most prestigious event. 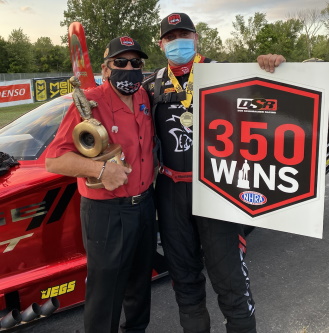