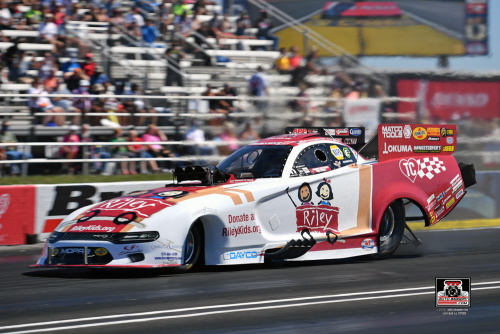 BROWNSBURG, Ind. (September 6, 2020) – Current Funny Car points leader Tommy Johnson Jr. secured the No. 1 qualifier position with his Riley Kids Dodge Charger SRT Hellcat on Saturday evening with his 3.878-second pass at 326.40-mph. It was Johnson’s third time securing the pole position over the last four events, and his 21st No. 1 qualifier overall.

Prior to rocketing to the top of the field, Johnson laid down the quickest pass of Q2, earning a total of six bonus points on Saturday. As the No. 1 qualifier, he will take on Dale Creasy Jr. in the first round of eliminations. The Avon, Ind. resident hopes to use the momentum of qualifying No. 1 to propel him through eliminations and into a final round showdown to vie for his first U.S. Nationals win.

“We missed it by just a little bit on Friday night,” said Johnson, winner of the 2020 NHRA Arizona Nationals. “We knew it was going to run a good lap and our car has the performance. I was glad to see a bit of a delay. The sun went behind the grandstands and the guys made a huge change in the clutch and I knew they were going for it. It was evident a few hundred feet into the run that it was on a good one. I knew by how hard it was pushing me back in the seat. The performance is solid. We have three No. 1’s and a No. 2 at the four races here at Indy. Now it’s time to turn those into a win.”

The Competition: No. 16 Dale Creasy Jr. 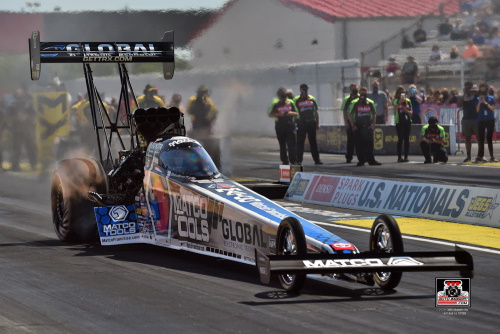 Quotable:
“Qualifying went well for this Matco Tools team. We’ve been working hard to be more consistent and we’re creeping up on it with support from Global Electronic Technology and TRD and Toyota. We’ve still got work to do. We want to qualify better. We’re going into race day feeling confident. We’re in the top half of the ladder. We have a car that can hunt and win. (Crew chiefs) Brian (Corradi) and Mark (Oswald) and the Matco boys will go over the car and get ready for race day. It’s the U.S. Nationals. You don’t need any extra motivation to win. We’ll do what we do; have fun, stay consistent, go out and take it round by round.” 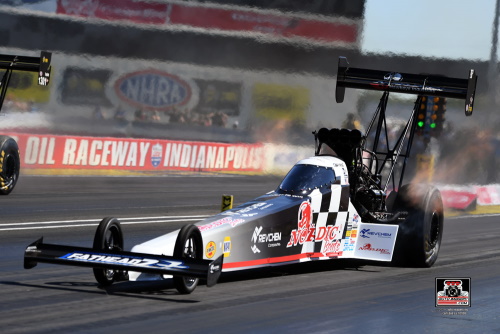 The Competition: No. 8 Doug Foley

Quotable:
“This weekend has been great. The car is going down the track and like all teams, we have our little issues. Top Fuel cars are not that easy. If it was easy to run one of these, everyone would be doing it well. I’ve gotta hand it to (crew chief) Todd Okuhara and my crew. These guys know how to make a dragster work and I think we’re ready for tomorrow with the Nordic/Revchem dragster.” 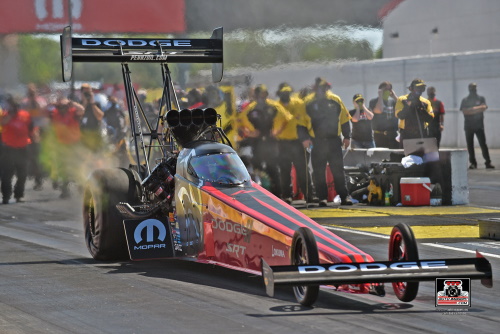 The Competition: No. 11 Terry McMillen

Quotable:
Qualifying for this Dodge Hellcat Redeye dragster was definitely in the ‘Big Go’ fashion and what I mean by that is the challenges we faced in qualifying, and overcame. I never lost belief in this team. We smoked the tires in Q1 when we were getting after it. We thought we’d throw down a safe number to get qualified in Q2 and we ended up smoking the tires. We ended up not acquiring any data on that lap. So, we go into the final qualifying session at the U.S. Nationals and we’re not qualified in the show. For this team to make blind calls of data and feel is what brought us to that 3.742 E.T. and that put is sixth. You gotta be in it to win it and I’m extremely stoked on that pass. The parts and car look great and clean. We’re going to have really good conditions in the morning with a 10 a.m. start that will be very comparable to the Q3 lap, and we’re in a great spot to have a great day on Sunday.” 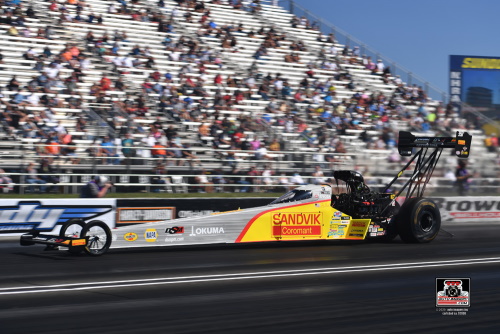 The Competition: No. 3 Clay Millican

Quotable:
“It’s just too new with this Sandvik Coromant/Okuma dragster. It’s sliding down the track too slow. Something isn’t right, but when we find it, it will be fixed and we’ll be back to normal like we were in testing last week. Mike Green is a champion crew chief. I have a great team and we’ll figure it out and start winning rounds.” 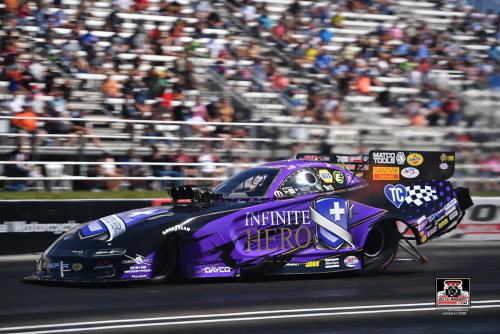 The Competition: No. 10 Cruz Pedregon

Quotable:
“We obviously struggled for the last race and first lap here. We had our backs to the wall on the second qualifying run. We had to make a good run to get into the U.S. Nationals field and we desperately need tune-up data with this new clutch package. I thought our second run was fantastic. We made a great lap. We got a bonus point and we got good data. That helped us drag it up there for the final. I think if you give us a few more laps on this new clutch pack we’ll be right back at the front. I’ll take the four tomorrow, our more dial-in runs. We have a good hot rod again. It’s starting to do what we tell it again. I like our chances for tomorrow.” 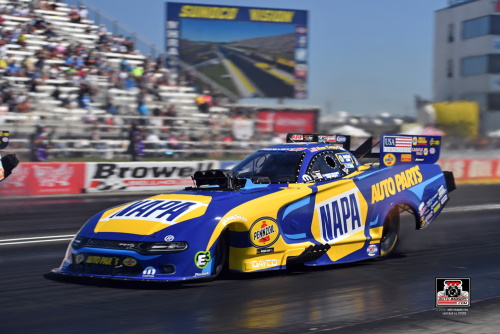 The Competition: No. 15 Jim Campbell

Quotable:
“Hearing (crew chief) Rahn Tobler talk about how prepared he was for Q1 and how excited he was to try what he had been working on and it showed on the track with that great 3.89. We knew there was another night session if there was a small delay and the sun went down like it did. We don’t count out our teammates. We have the only two five-disc clutch cars. We’ll settle for second, but we’ve gone down all the runs. We have great data. It’s the U.S. Nationals. The pressure is heightened. The guys have done a great job. Let’s see if we can put it all together like we did last time here.” 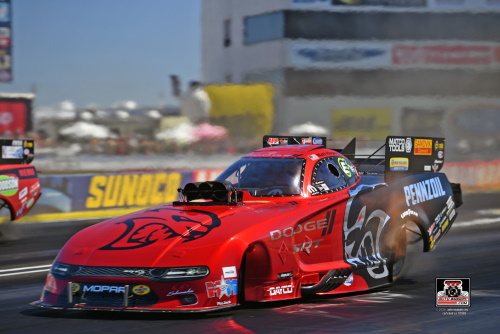 The Competition: No. 12 Paul Lee

Quotable:
On winning the Summernationals and DSR’s 350th national event trophy during Q3:
“It’s amazing. What a huge milestone, what a legacy Don Schumacher has created here. I lost my brother a couple of years back, and I switched helmets for that race. I know he’s riding with me, but God bless it. I tell you. I’ve probably been as nervous as running for a championship just because you want to get it done. This Mopar Hellcat has been running extremely well. (Crew chief) Dickie Venables has been putting a great race car underneath me. It’s just running hard and I’ve been trying to do my job on the starting line. To get 350 wins for DSR; it’s a big part of my career, a big part of Don Schumacher’s career. To have a Wally already on Saturday night at the US Nationals, the Big Go, it can only get better from here.” 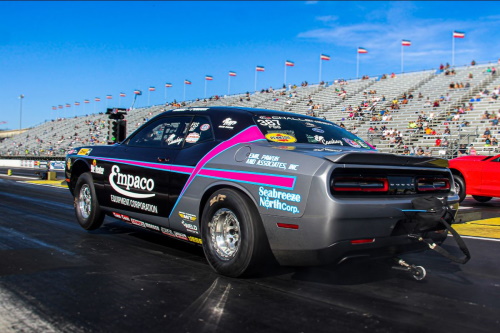 The Competition: No. 23 Kim Shirley

Quotable:
“We really made a good run this morning which got both Leah (Pruett) and myself into the top half of the field, and got our Dodge Drag Paks back on track. It’s great to see our DSR Dodges qualify so well and get a round win under our belts. We’re both excited that we get to race tomorrow, and hopefully go some more rounds. I would love nothing more than to get one of these DSR Dodges in the winner’s circle tomorrow.

“NHRA has done a great job with safety, and being able to race here for the fourth time in here in Indy. It’s great to see more fans this weekend, and we look forward to keeping this momentum going, and continuing with the safety protocols that NHRA has in place so we can finish our season out.” 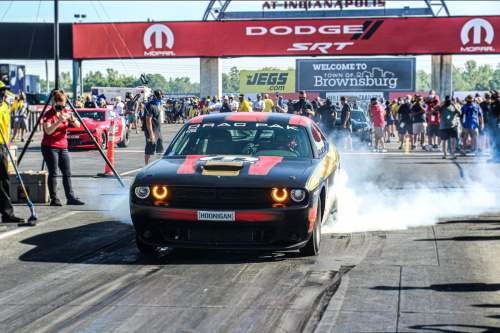 The Competition: No. 19 James Jeschke Jr.

Quotable:
“We ran a great Q2 lap this morning and that pass was something we’ve been searching for and it’s a testament to fresh motors and blowers. We’re getting back to the high performance and how we know how to run. We got a first-round win with both cars and we’re going to sleep on today and get ready to go rounds tomorrow. We know they won’t sleep on us the way these Drag Pak’s are performing.”