INDIANAPOLIS, IN (September 6, 2020) – Entering the 66th annual NHRA U.S. Nationals in Indianapolis Terry McMillen and the AMALIEⓇ Motor Oil Top Fuel team had a number of goals most importantly picking up their second win at the historic event. In addition to victory the team was looking to continue gathering data and runs on a brand new chassis as well as making a switch in their clutch package. The three rounds of qualifying for the event including a Friday night session gave the team the opportunity to run in optimal conditions. 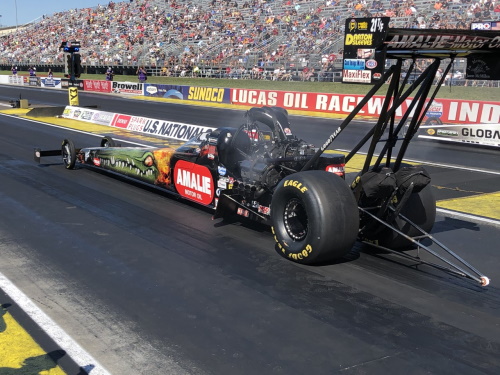 “We had a number of things we want to accomplish this weekend at the U.S. Nationals,” said McMillen. “We wanted to get another U.S. Nationals win in the AMALIEⓇ Motor Oil XTERMIGATORⓇ Top Fuel dragster of course but we also wanted to continue to show the rest of the class that we are one of the top teams. Even though we didn’t get our top goal we accomplished all our other goals.”

On Friday night after a lengthy delay McMillen and his Rob Wendland tuned AMALIEⓇ Motor Oil XTERMIGATORⓇ Top Fuel dragster made a 3.799 second run at 323.27 mph which was quick enough to place the team 10th on the qualifying sheet. It was the first run in the cooler night conditions since the team brought out the new chassis.

“We knew we would have really good conditions on Friday night,” said Wendland. “We had a killer tune up in this Amalie Motor Oil Top Fuel dragster but we got delayed almost two hours and the conditions changed dramatically. We were able to make a few changes but I know there is more in this tune up. We got some good data and I know we can run in those conditions if we need to again.”

During Saturday’s two qualifying sessions McMillen’s team got information from both runs in spite of one run being less that successful. The opening run of the day was a tire smoking 4.267 second run which was followed by a much improved 3.773 second run at 317.87 mph which left the team as the No. 11 qualifier. 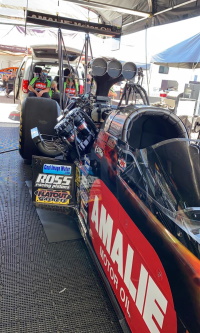 “We learned a lot from the first run on Saturday and put it to good use on the final run,” said McMillen. “Rob was excited to see how the car reacted and we felt good going into race day. We got a good handle on the new clutches and we knew we were headed in the right direction. The one thing was we were a little behind the eight ball and know we would have a tough first round.”

In the opening round today McMillen squared off against Leah Pruett the No. 6 qualifier. It was a battle of two Top Fuel championship contenders. In an epic race McMillen made another dramatic performance leap running 3.726 seconds at 320.13 mph which was the fourth quickest run of the event. Unfortunately, Pruett was beside him making the quickest run of the event, a blistering 3.703 seconds at 325.61 mph pass. The team took the best of the situation and will head to the next race, the Amalie Motor Oil NHRA Gatornationals, September 26-27.